US not ready 'right now' for military collaboration with Russia 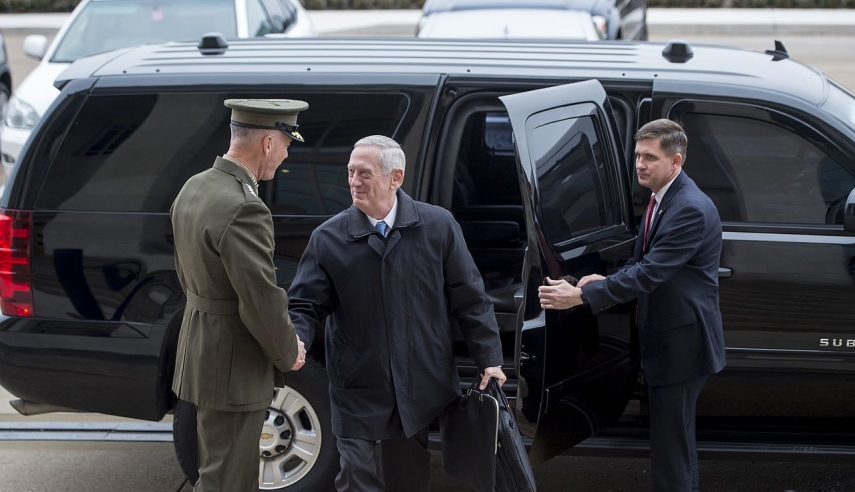 "We are not in a position right now to collaborate on a military level, but our political leaders will engage and try to find common ground or a way forward," Mattis told reporters at a NATO summit in Brussels.

Russian Defense Minister Sergei Shoigu said earlier in Moscow that he was "ready to restore cooperation with the Pentagon," and President Vladimir Putin called for Russian intelligence agencies to bolster contacts with their US counterparts in the fight against terrorism.

The back-and-forth remarks come as President Donald Trump faces a growing crisis over ties between Russia and members of his campaign team, the AFP news agency writes.

And the new president has repeatedly praised Putin, calling for better cooperation with Russia, including in the fight against the Islamic State group in Syria.

But Mattis, a former Marine general, said Russia must first "prove itself" and follow the international law before the US and NATO can consider closer military ties.

"The point about Russia is they have to live by international law just like we expect all nations on this planet to do," Mattis said.

The new Pentagon chief's visit to NATO, his first trip to Europe, was closely watched by jittery partners concerned over the potential Kremlin-White House ties, the AFP points out.

Trump's national security adviser Michael Flynn was forced to quit this week over allegations he had discussed US sanctions with Russia's ambassador before taking office.

Mattis on Wednesday had issued a blunt warning to NATO, saying the 28-member alliance needed to meet earlier spending pledges or else America would "moderate" its commitment.

When asked for clarification about what that might mean, Mattis said the trans-Atlantic bond is "as strong as I've ever seen it" and stressed America remained "rock solid" in its support of Article 5 -- NATO's core collective-defense tenet that says an attack on any country will be met by a response from the alliance.

His comments come as the Chairman of the US Joint Chiefs of Staff Joe Dunford was set to hold talks with his Russian counterpart Valery Gerasimov in Azerbaijan's capital Baku.

Currently, the US-led coalition fighting IS in Syria and the Russian military, which is operating in similar areas to support President Bashar al-Assad, do not cooperate but hold regular phone calls to ensure their jets are not flying missions in the same area.