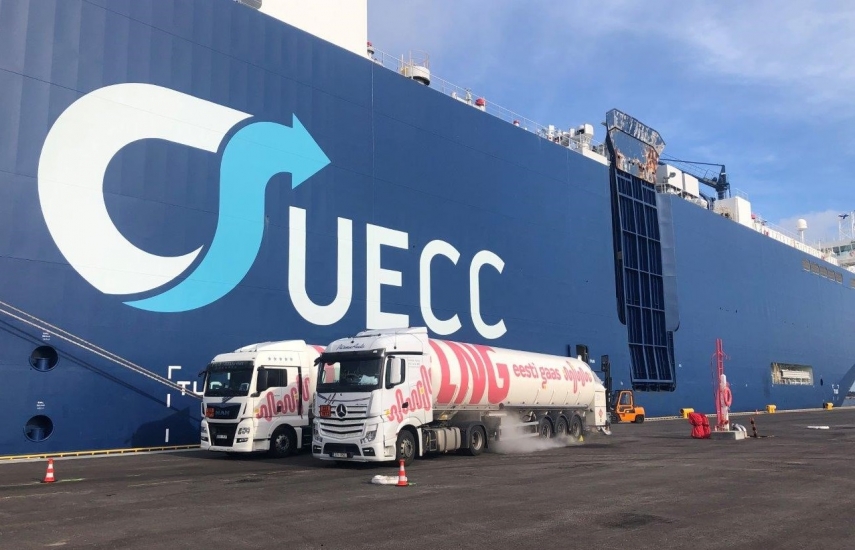 Elenger, one of the largest energy groups in the Baltic region, has started to provide LNG bunkering services to LNG-powered ships in the port of Hanko, Finland, for the first time in addition to Tallinn and Helsinki. For the port of Hanko, this means scheduled LNG bunkering on its premises, and Elenger will be providing the service to two new ships in addition to Tallink’s Megastar.

The two ships bunkered by Elenger in the port of Hanko are the largest dual fuel LNG vehicle carriers in the world. Sister ships Auto Energy and Auto Eco transport new vehicles from Europe to Finland and Russia. The ships of ice class 1A Super can accommodate a total of 4000 vehicles on their ten decks. Both environmentally friendly ro-ro ships belong to UECC, one of the largest companies specialising in short sea vehicle shipping in Europe.

“In addition to new passenger ships, new cargo vessels are changing to the LNG technology in larger and larger numbers. LNG will eventually replace diesel fuel among marine fuels, which will contribute to cleaner air and cleaner Baltic Sea,” noted Kalev Reiljan, member of the board at Elenger.

The first bunkering in the port of Hanko followed a lengthy period of thorough preparation and work for the prevention of any potential risks. “Thorough groundwork and the extensive experience of our specialists ensured that the first bunkerings in Hanko have gone smoothly as planned,” Reiljan said.

In the following months, truck-to-ship bunkering in Hanko will be performed once a week, every Friday. Four truckloads of LNG, which makes 72 tonnes, will be pumped to the ship. Like in Helsinki, Elenger is planning to deliver LNG to the port of Hanko from the new Novatek’s LNG plant in Vysotsk, which was commissioned with the assistance of Elenger experts.

Elenger is the leading LNG supplier in the region and the biggest truck-to-ship LNG bunkering provider in whole Northern Europe. By now, Tallink’s vessel Megastar has been truck-to-ship bunkered with LNG in the ports of Tallinn and Helsinki over 2000 times. Last year, Elenger supplied over 16,000 tonnes of LNG from its various sources in Russia, Finland, Lithuania and Poland while the amount supplied a year before had been 12,300 tonnes. The company has procured nine semi-trailers for the purpose of LNG transportation and bunkering.

Currently the Dutch shipbuilding company Damen is building for Elenger LNG bunkering vessel, which is to render services in the northern and eastern part of the Baltic Sea. It will be completed in 2020 and start bunkering environmentally friendly vessels operating in the Gulf of Finland.

LNG (liquefied natural gas) is characterised by very high energy content, and it can be used in marine and land transport as well as energy production in areas where natural gas pipelines are not available. LNG is an environmentally friendly fuel which significantly reduces carbon dioxide, SO x and NO x emissions and produces almost no soot particles.

Elenger, in homeland Estonia known as Eesti Gaas, is a one of the largest and most experienced private energy groups in the Baltic region, with roots in 1865. Elenger’s core product and competence is natural gas delivered to customers as pipeline gas, compressed natural gas (CNG) and liquefied natural gas (LNG).

Besides natural gas, Elenger sells electricity, is engaged in solar power production and develops different energy solutions for its customers. Elenger has 50,000 clients and employs 240 people. The company operates in Finland, Estonia, Latvia and Lithuania.