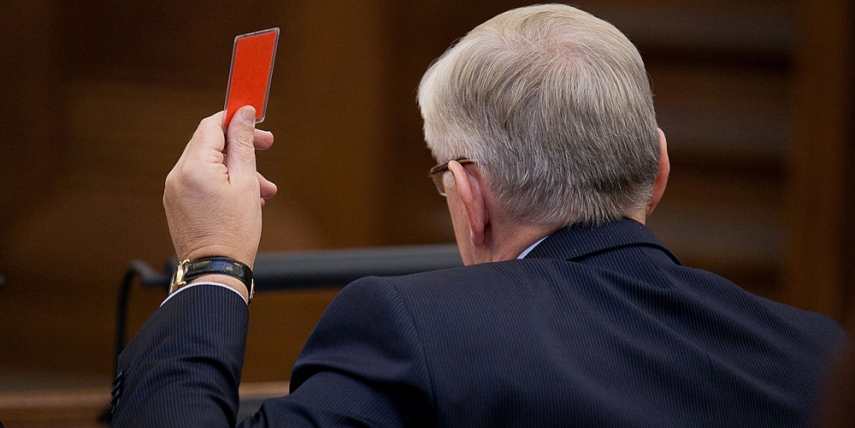 PM Kucinskis: "We are going where we have never been" with Latvia's new budget [Ernests Dinka, Saeima]

RIGA - Saeima on Thursday approved Latvia's 2017 budget in its final reading, forecasting budget revenues at over 8 billion euros and expenditures at 8.4 billion euros next year.

The budget for next year was given a green light in the final reading by coalition lawmakers with 59 votes in favour and 36 against.

The Saeima meeting and debates on the budget and related bills took around 20 hours. The meeting began at 9 a.m. on Nov. 23.

As compared to the 2016 budget, revenues are predicted to grow by 664 million euros and expenditures by 680 million euros in 2017.

Prime Minister Maris Kucinskis (Greens/Farmers) stressed that the budget marks a crucial turning point. "This budget is not for loud metaphors, it is based on the abilities of the coalition partners and their strength to achieve compromises, the wish to make the first steps towards radical reforms in many areas. We are going where we have never been. Let’s make that first step together!" said Kucinskis.

Next year, healthcare funding will be increased. The boost is a part of the planned reform of the healthcare system. The extra funding has been secured by reaching an agreement with the European Commission, which has permitted Latvia to expand its budget deficit by 0.1 per cent of GDP and spend an additional 34.3 million euros on the health sector.

Latvia's defense budget is expected to grow by 98 million euros next year to 1.7 per cent of GDP. Latvia has committed to increasing its defense spending to 2 per cent of GDP in 2018 and 2019, according to its medium-term budget framework.

Funding for education will rise, the Finance Ministry noted. Financing for social protection, including pensions and social benefits, will grow by 197 million euros next year, while budget expenditure on public order and security will increase by 80 million euros.

And extra 19 million euros have been reserved in the draft 2017 budget for demographic measures. They include raising the monthly benefit for families’ fourth, and each successive, child from 34.14 euros to 50.07 euros.

The minimum monthly wage will go up to 380 euros from 370 euros in the new year.

Revenues to the budget will be increased by gradually raising excise tax on cigars, cigarillos, cigarettes, and tobacco. The tax rate on natural resources, including drinking water, will also be raised.

Small businesses will also be impacted by changes. The current microenterprise tax regime will remain in effect for another two years, and a new tax regime will be developed for companies with low annual turnovers.

Lawmakers also approved a bill that will toughen eligibility requirements for unemployment benefits. At present an unemployed individual in Latvia can claim unemployment benefits, provided that state social insurance contributions for this particular employee had been made during at least nine months in the 12-month period immediately preceding the date the person was granted the status of unemployment. Under the legislative amendments passed today and effective in 2017, the unemployed will be able to claim unemployment benefits only if state social insurance contributions for them had been made for 12 months in the 16-month period before losing the job.