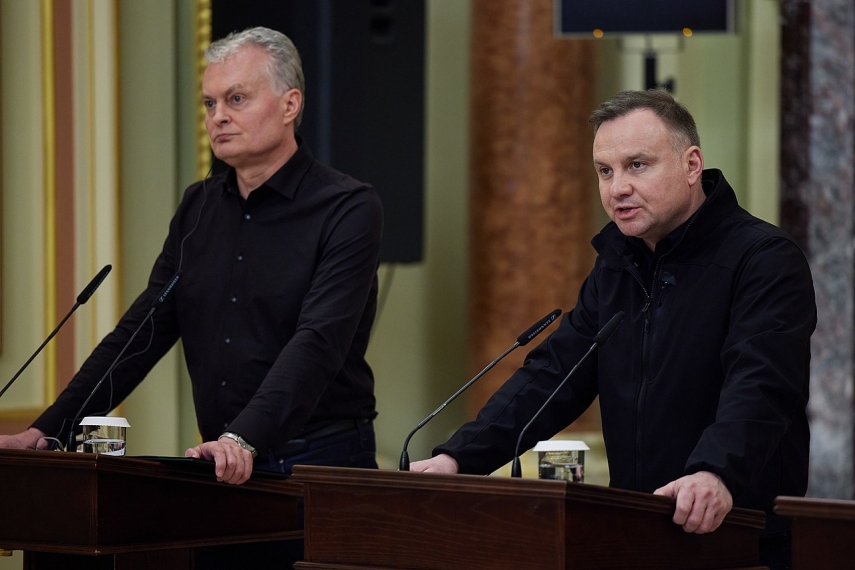 VILNIUS – Polish-Lithuanian unity and efforts to beef up security are bad news for the aggressor, Lithuanian President Gitanas Nauseda said as he visited the so-called "Suwalki gap" with his Polish counterpart on Thursday.

According to Nauseda, Lithuania and Poland are increasing their national defense spending, an issue of focus at "highest political level".

"Perhaps this will be bad news to our enemies or those countries that look at us through the eyes of an aggressor: today they see our unity, today they see our readiness to give maximum attention to our defense, and this is the bad news for them," Nauseda said as he and Polish President Andrzej Duda delivered remarks to the media.

"The good news is for our people who care about the security of our countries," he added.

The two leaders visited the mobile command post of the Multinational Division North East in Poland and then left for the Lithuanian Grand Duke Vytenis General Support Logistics Battalion in Marijampole, in southern Lithuania.

Nauseda said their visit to the Suwalki corridor, seen as the weakest link in the security of NATO and countries in the region for some time now, was not accidental.

"People both on this side of the border and on the Lithuanian side are wondering whether we have sufficiently defended every inch of land," he said. "We all know perfectly well that this is a vulnerable place where the aggressor's eyes can be directed first."

Duda said that the aim of the visit was to dispel doubts raised by local people and the international media about the security of the Suwalki gap.

"The president of the Republic of Lithuania and I decided to come to this site and demonstrate that this place is safe", he said.

Duda underlined that the security of the land strip is ensured by Lithuanian, Polish and NATO forces.

Lithuania and Poland are "doing their utmost to ensure that the defense format is strengthened" and the Madrid Summit's decisions are implemented, according to the Polish leader.

Nauseda noted that NATO leaders had taken "many historic decisions" in Madrid to bolster the security of the Alliance's eastern flank, including plans to "increase the German presence in Lithuania to brigade level".

"First of all, it is the principle of forward defense, which allows us to expect not only more attention but also more military and combat power here on our soil, on Polish and Lithuanian soil," the president said.

"And I am very glad that NATO seized this historic opportunity to pay attention to emerging risks and to respond to them very quickly and decisively," he added.

The Suwalki gap is a land strip of around 100 kilometers on the Lithuanian-Polish border that is wedged between the Russian exclave of Kaliningrad on the west and Belarus on the east. In a military conflict, the seizure of the land corridor would cut off the land route for NATO allies to the Baltic countries.