ABMS: The fourth MENAA awards recognized ABMS as the winner of the Customer Delight Award 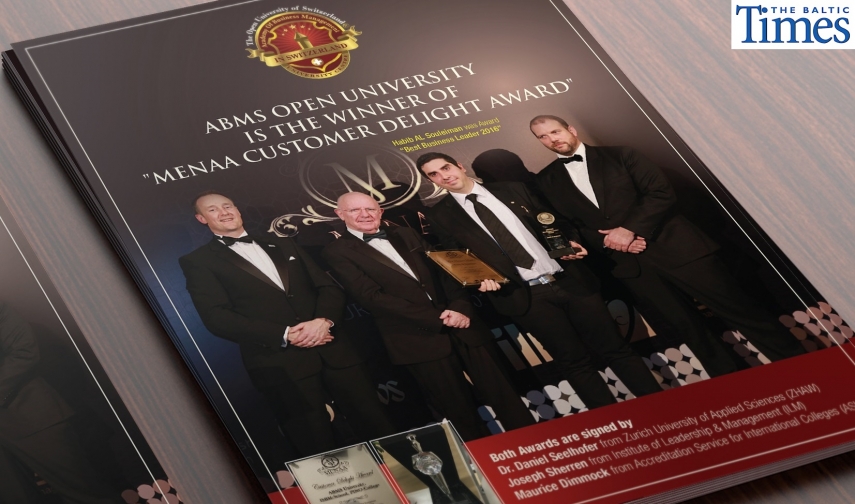 The fourth MENAA awards recognized the Academy Of Business Management in Switzerland as the winner of the Customer Delight Award. It was given by the Zurich State University of Applied Sciences (ZHAW) and Institute Leadership and Management (ILM).

The jury, comprised of D.Seelhofer from Zurich University in Switzerland, J.Sherren from York University in Canada, among other top C.E.Os. of the Middle East ,North Africa and Asia region.

The Academy of Business Management in Switzerland was acknowledged by the jury for its exceptional customer service and significant achievements in customer satisfaction and delight.

Dr. Habib Al Souleiman, the director, was awarded the Best Business Leader for 2016. He also received the Customer Delight Award on behalf of ABMS.

The MENAA award celebrates the success of companies that have gone beyond in customer delight and satisfaction. The ABMS considers the accreditation important, as satisfying their students’ needs has always been their top priority.

The ABMS is a trendsetter, being the first full virtual university in Europe. It is also a registered trademark for education in Switzerland under Nr690804 by the Swiss Federal Institute of Intellectual Property. The ABMS offers lectures in English and other various languages, and the lecturers are from Switzerland, France, and the UK. This university is also accredited by AISC, which was created in Britain and recognized by their government, also a member of the UK NARIC. The ABMS is also accredited by a number of other governing bodies, such as: the ECBE, European Council for Business Education, an affliate of the European Association for Quality, or ENQA. The ABMS was founded in ZUG and is authorized to operate and issue diplomas in Switzerland according to the letter number (DBK DBKS 6/ 33  /60236), which are issued by the Board of Education and Culture. The distance study program methods of the ABMS were reviewed and fulfilled by the Law for Education (Art 21 Abs 2 Ziff). Voted in the 11 Best by the Swiss Federal Department of Finance, according to the letter number (1523_01/04.14). The ABMS offers certificates that are recognized by Asiqual.

The ABMS is also a member of ACBSP, (under CHEA USA), which is an accreditation of universities in the United States of America.

The ABMS is certified under ISO 29990:2010, for learning services of non-formal education and training.

The ABMS is a virtual university, hence its programs are run by transmitting learning materials to learners in the form of audio and images. After matriculation, the students can visit the library, well- equipped with records of lectures in audio and images. In addition, learners can interact with lecturers, because the ABMS ensures that they don’t live far away from the cities and countries of study.

The students at the ABMS are of different cultural backgrounds and speak in various languages. To fight the obstacle of the language barrier, the institution customizes learning materials for the learner according to languages they can use to study.

Dr. Habib, the director of the ABMS, disclosed that out of over 1,200 students, 98% are satisfied with ABMS services. This indicates immense customer satisfaction and delight. It also proves ABMS to be a global trendsetter in Online Business Education.