US to position tanks and heavy artillery in Baltics 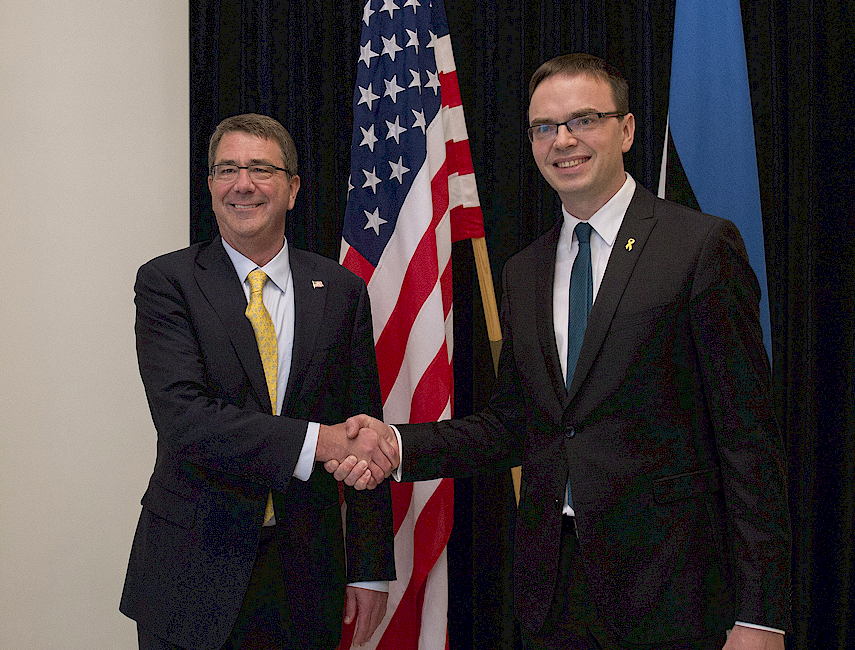 2 By Helen Wright, TALLINN
America will “pre-position” tanks and a heavy artillery battalion in the Baltic States and three other European countries, US Defense Secretary Ashton Carter announced on a two-day visit to Estonia.
Estonia, Latvia and Lithuania will take it in turns to host a “temporary” rotating battalion, which will include tanks and artillery vehicles. They will also be stationed in Poland, Romania and Bulgaria.
Carter announced the new measures after a meeting with Estonian Minister of Defence Sven Mikser, Minister of Defence of Lithuania Juozas Olekas and the State Secretary of the Ministry of Defence of Latvia Janis Sarts in Tallinn.
Speaking at a press conference alongside the Baltic ministers, Carter said: “American rotational forces need to move more easily and more quickly to do training and exercises here.
“That’s why I am pleased to announce we will temporarily stage one armoured brigade combat team’s vehicles and associated equipment in countries in central and eastern Europe.”
It was later confirmed that around 250 vehicles would be sent to Europe.
A Pentagon Department of Defense official said: “That is roughly 90 tanks, 140 Bradley fighting vehicles and 20 M109 self-propelled Howitzers and associated equipment.  We are not positioning troops.  This equipment will be used when troops come to train in exercises with NATO partners.”
They will be able to take part in military exercises and be able to offer “richer” and more “intensive” training opportunities for European troops.
This will, in turn, create a quicker response as soldiers will be using the “actual equipment” on the “actual kind of terrain” they will be needed on should any European nation need reinforcements.
It was also stressed the equipment was temporary in the fact that it would not be “static”, rather than it would only be in the region for a short period of time.
“For us this is a more effective way of doing things, but I just wanted to be clear that our presence is persistent but agile, that’s the whole point,” Carter said.
No date was announced for the arrival of the battalion but Mikser said Estonia was ready to host troops as soon as “today or tomorrow”.
Carter said: “We each agreed that while we do not seek a cold war, let alone a hot war, with Russia, we will defend our allies.”
During his two-day trip, Carter also visited the NATO cyber security centre in Tallinn and announced that the USA would be helping to develop cyber defense strategies and critical infrastructure protection planning.

The three Baltic ministers each promised their nations would continue to, or continue to work towards, spending two per cent of their GDP on defense spending in line with NATO guidelines.
Sarts said: “Of course security in this region is first and foremost our own responsibility, to that end our government has decided that we will increase of defense spending to two percent by 2018.
“We will increase out defense capabilities to respond to the challenges as they are emerging in this region but also we will do our job to help others, starting with Ukraine, as well as other regions in Europe to keep the stability and peace.
“What we are looking for is credible deterrents, credible deterrents to dissuade any party from taking unnecessary risks against any of the NATO countries.”
Associate Fellow at the Latvian Institute of International Affairs Eoin Micheal McNamara said that with pre-positioning the major allies are still clinging to the hope that the wider crisis in Europe’s east can be solved diplomatically.
He told the Baltic Times: “There is really two games at play, there is the wider diplomatic game and the game of military contingency planning. The US and a number of NATO’s major allies are trying to make sure that one doesn’t stifle of the other.
“They are conscious that should NATO take up a heavier military position on its eastern flank, this might well provoke a significant military build-up, with Russia responding in kind by increasing its military presence in its western oblasts. Such a dangerous escalation would obviously make diplomatic resolution a far more difficult prospect than it is already.
“So as the lead ally behind this pre-positioning, the US is trying to strike a difficult balance where its military presence is relatively light but significant enough to reassure its Baltic allies and deter Russian aggression. This is essentially the strategy that is behind this US prepositioning in the Baltic states.”
The press conference was held on Victory Day, June 23, when Estonia celebrates winning its war of independence in 1919, and each minister laid a wreath of flowers at the War of Independence Victory Column in Freedom Square to mark the day.