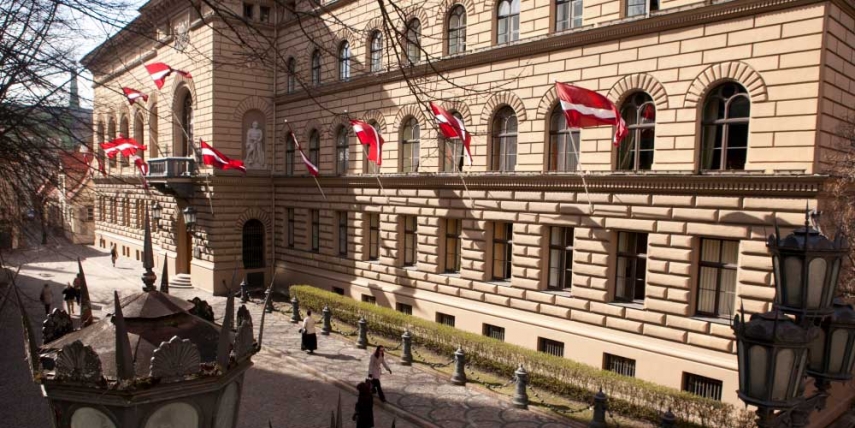 Latvian politicians are increasingly associating the process of selecting candidates for the upcoming presidential election with political parties' struggle for more influence in the government. Since the last parliamentary elections in November of last year, Latvia's government has been a coalition between Unity (the party of Laimdota Straujuma, Latvia's current prime mininister), the Union of Greens and Farmers and the National Alliance. Incumbent president Andris Berzins has announced he will not stand for a second term, becoming the first president to voluntarily step down after a single term since the restoration of Latvia's independence in 1991.

Defence Minister Raimonds Vejonis, a member of the Union of Greens and Farmers, has been proposed by his party, and Unity, the largest party, announced they would also be supporting his candidature on Monday, following initial indecision; however, their nationalist coalition partners, the National Alliance have refused to support Vejonis, and put forward their own candidate, legal expert Egils Levits. The main opposition party Harmony, have also proposed their own candidate, Sergejs Dolgopolovs. The president is elected every four years following a vote of members of the Saeima (the Latvian parliament).

Off the record, politicians admit that there is much more at stake than simply parties getting their candidate elected president. The inability of the ruling coalition parties to agree on a joint candidate also raises questions about the coalition's future. Some claim that the Union of Greens and Farmers is much more interested in getting the prime minister's post, than it is in having their party's candidate elected president.

The relations between the coalition partners have also taken a turn for the worse after the National Alliance's refusal to support Vejonis. Although Unity has expressed support for him, party members will be free to choose which candidate to support.

There are also other issues that the ruling coalition parties differ about: for instance, proposals regarding higher excise tax on alcoholic beverages and the process of submission of new bills to the Saeima, Unity's leader Solvita Aboltina told LETA.

The National Alliance member Imants Paradnieks and Health Minister Guntis Belevics (Union of Greens and Farmers) have suggested a faster increase in excise tax on alcoholic beverages, although the current legislation has been harmonized with producers. Aboltina has said that this may be interpreted as a violation of the coalition agreement. On the other hand, National Alliance co-chairman Gaidis Berzins has said that "the coalition agreement is not a dogma", and emphasizes that the initiative to increase several excise tax rates on alcoholic beverages faster than currently planned will have a positive fiscal effect, which is why the National Alliance supports the motion. Berzins also believes that coalition partners' reaction to the National Alliance's nomination of Levits was "inexplicable", as the party had previously stated multiple times that it was planning to nominate him.

Ingmars Lidaka, an MP from the Union of Greens and Farmers, said he did not believe that anyone could be interested in toppling the government or disrupting the coalition's work because, given the current make-up of the Saeima, the same coalition would simply have to be created once again. On the other hand, he added, if the prime minister or some other minister is replaced, it could hamper the work of the government or particular ministries.

Politicians also attach great importance to votes of the smaller parties represented in the parliament, as Martins Bondars, the presidential candidate of the second-largest opposition party in the Saeima, the Latvian Alliance of Regions could be one of the first candidates to drop out of the election, and so their eight representatives will then have to vote for some other candidate. It is also unclear yet which candidate the third-largest opposition party, From the Heart for Latvia, will support.

But politicians also agree that most probably the next president will be elected in the second round of the election, with the help of opposition MPs' votes. By that time, Latvia's Ambassador to NATO, Maris Riekstins, or another candidate not so far mentioned, may also have been nominated.