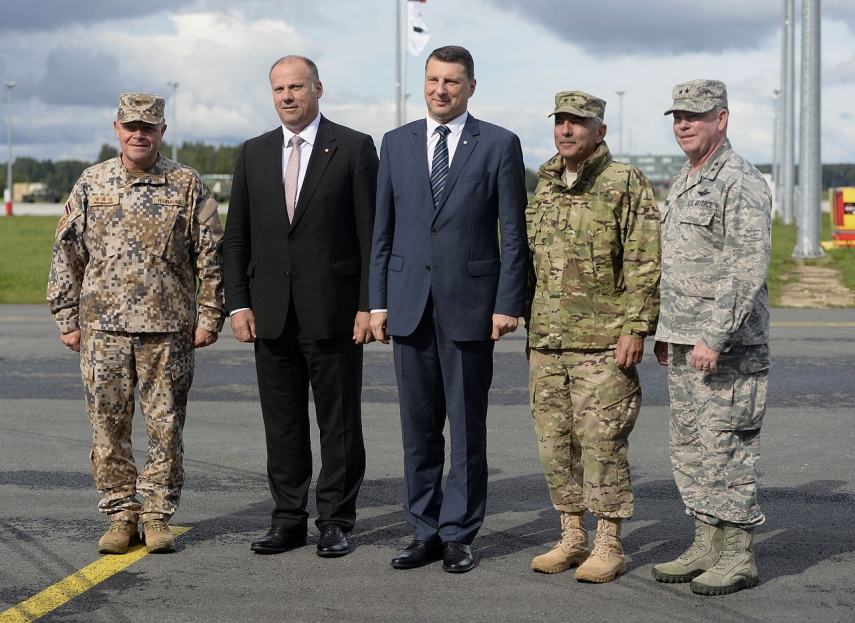 RIGA - In Latvia, NATO Enhanced Forward Presence is a historic event, strongly reaffirming the solidarity of the Alliance's member states, President Raimonds Vejonis said during a welcoming ceremony for NATO's multinational battle group at the Adazi military base today.

In his address, President Vejonis greeted the troops from Canada, Albania, Italy, Poland, Slovenia and Spain deployed to Latvia for service in the Canada-led battle group.

"It shows NATO's commitment to defending each member state of the Alliance. It also shows that we realize that a threat to one ally is a threat to us all, a threat to the principles and values on which our Alliance is based," Vejonis said.

The president noted that since joining NATO in 2004 Latvia has been developing its defense capabilities but that in recent years the situation in the world had become more insecure because of Russia's aggression against its neighbor countries.

Vejonis promised that Latvia will keep bolstering its military capabilities, meeting its commitments as a NATO member and that Latvia's defense budget will reach 2 percent of GDP by January 2018. The president also said that along with the other Baltic states, Latvia has been taking part in multinational operations in Afghanistan and Iraq, as well as missions in the Mediterranean, Mali, and Somalia. Latvia is also ready to continue to fight terrorism within the Global Coalition against Daesh.

NATO Secretary-General Jens Stoltenberg, who is visiting Latvia today, also spoke at the welcoming ceremony in Adazi, praising the soldiers who will be serving with the battle group and saying that they embody NATO's "unique spirit and solidarity".

It is not easy to be away from one's family and friends but the soldiers' presence in Latvia is highly appreciated, the NATO chief said, adding that today NATO fulfills the promises given at its Warsaw Summit to deter aggression and maintain peace.

NATO is partners that work together, Stoltenberg said, stressing that the Alliance represents unity and solidarity.

Latvian Defense Minister Raimonds Bergmanis (Greens/Farmers) addressed the troops saying that the battle group's presence will undoubtedly strengthen the collective defense forces and that these times cooperation is especially necessary.

Canadian Defense Minister Harjit Sajjan said that the Canadian mission here is sending a signal to the whole world.

He indicated that this is Canada's largest mission in Europe since the end of the Cold War. The minister said that Canada has a new defense policy aimed at ensuring peace in the country, North America and elsewhere in NATO member states as needed.

As far as Russia is concerned, Sajjan said that Canada is open to dialogue but that it will provide strong support to its allies. This mission is not intended as an offensive, but a deterrence mission.