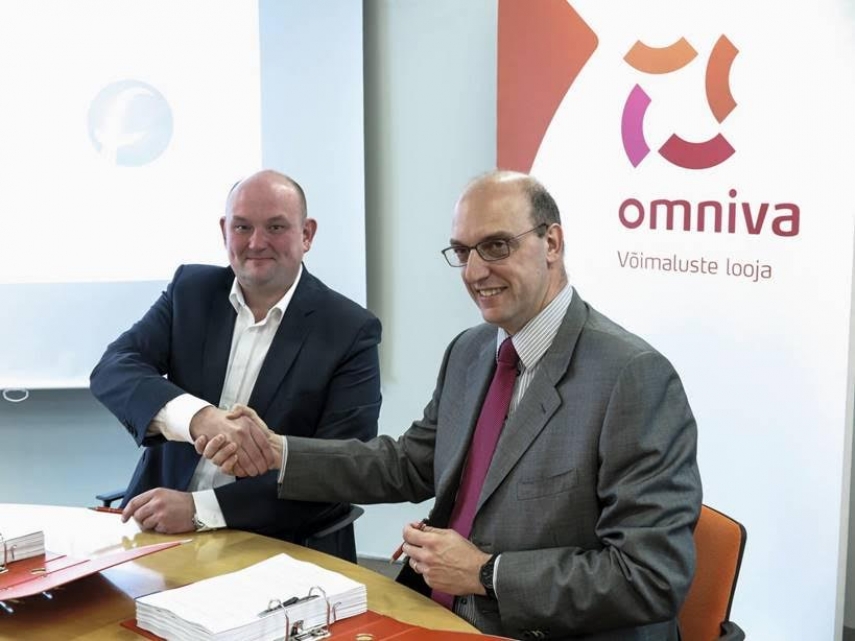 Ansi Arumeel, Member of the Management Board of Omniva and Lorenzo Moroni, CEO of Fives Intralogistics S.P.A signing the deal

On April 27, a contract was signed for buying the sorting line for the new logistics centre of Omniva. The technology makes up for about half of the investment made in the new centre.

According to Ansi Arumeel, Member of the Management Board of Omniva, the new sorting line is the heart of the new logistics centre as well as the whole company. “The new sorting line will be the most modern one in this region and has to meet the expectations imposed on it for the next 15 years to come,” Arumeel said. “As we expect a continued rapid growth in parcel volumes in the coming years, an efficient sorting line is crucial for success in the future.”

The planning of the line was based on several innovative prerequisites. Firstly, the new technology is many times more capable than the current one. “For example, the current sorting line can sort parcels between 32 different regions, but the new one will be able to sort between 400. Among other things, the new sorting line is capable of sorting nearly three times more parcels in one hour and do so in a much more exact manner,” Arumeel said.

More powerful sorting line is essential for handling the continuously growing parcel volumes which are expected to at least double in the following 10 years. Last year, the revenue of Omniva’s parcel business in the Baltics grew 17%. In 2016, Omniva delivered 40% more parcels through the parcel locker network than the year before.

According to Arumeel, the new sorting line accepts both small parcels and larger shipments weighing up to 50 kg. “Almost the entire sorting process is going to take place on the line and employees will have to manually sort only a few parcels that the machine is not able to sort for one reason or another,” Arumeel said. Therefore, the entire sorting process will become several times more efficient according to him.

The size of the plot of Omniva’s new logistic centre is almost 70,000 square meters, of which the building occupies about 13,000 square meters.  Therefore there is also room for expansion. For the main part, the logistics centre is a one-storey building, but there will be two storeys in the smaller office wing. In the new building, 200 employees will be working in production and 75 in the office. The moving to the new logistics is planned to take place in autumn 2018.

“In the establishment of the new logistics centre, we cared most about the welfare of our employees and focused on this at every stage of the project,” Arumeel said. For this reason, the new logistics centre will, in addition to the production and office premises, include a 70-seat diner, which is open to everyone, a small gym, and naturally, all modern household conditions.

Employees can get to work by a special bus, which will stop right in front of the logistics centre. There will also be a parking lot for 100 cars by the building.

A French-Italian company called Fives, which was chosen on the basis of careful groundwork and a public procurement, will build and install the sorting technology. Lorenzo Moroni, CEO of Fives Intralogistics S.P.A told that Tallinn and Omniva’s new centre is becoming a strategically important hub between the east and the west. “We are pleased to supply Omniva with the state of the art technology which helps them to take their business a step forward. I hope it is a start of a long and successful cooperation,” said Moroni.

The Omniva Group mainly operates in the provision of postal, logistics and information logistics services, as well as the management of e-invoices. In addition to AS Eesti Post, the parent company, the Group includes subsidiaries and related companies. The principal activity of SIA Omniva and UAB Omniva LT is the provision of parcel machine and courier services on the Latvian and Lithuanian markets. AS Maksekeskus operates in the provision of payment solutions to e-commerce companies in the Baltic region. OÜ Post11 offers international logistics solutions for delivering goods all across the world.