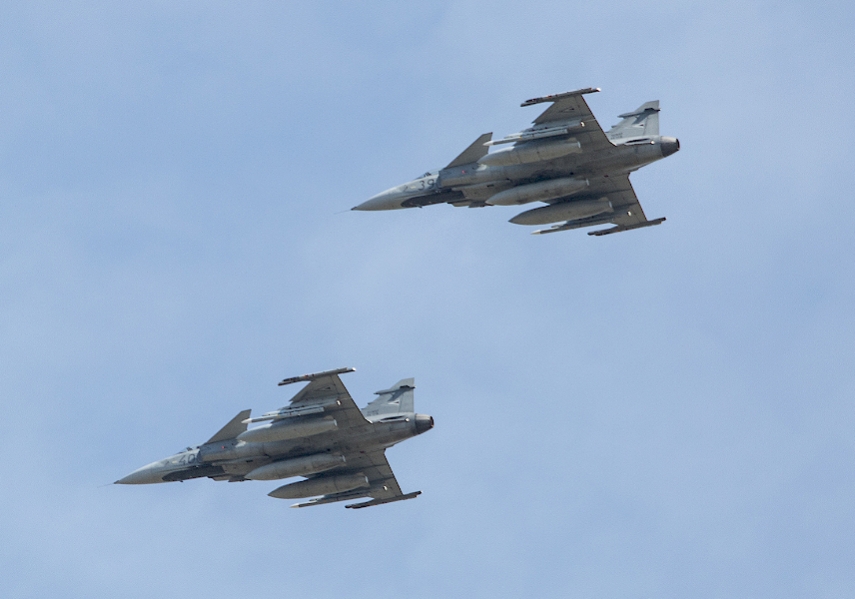 HUNGARIAN LEADERSHIP: The Hungarian Airforce has contributed 4 JAS-39 Gripen fighter jets like these for the latest NATO rotation of Baltic air policing.

RIGA - NATO has halved the number of fighter jets on its air-policing mission in the Baltic States.

As of September 2015, there are to be 8 jets on patrol, down from 16 in the previous rotation of NATO air patrols.

The task of securing Baltic skies will now fall to the German Air Force and the Hungarian Air Force.

The Germans have based their Eurofighter jets in Estonia; the Hungarians, who have taken on the lead role for the next few months, have based their four JAS-39 Gripen fighters in Lithuania.

This will be the 39th rotation of NATO allied patrols, and this is the first time Hungary has assumed the task of ensuring safe skies over Estonia, Latvia and Lithuania under NATO orders.

The symbolic key to the Baltic airspace was handed over to the Hungarians at Siauliai on August 31.

At the Farewell Ceremony held on Kecskemet Air Base in Hungary on August 17, Minister of Defence Csaba Hende emphasized that as a member of NATO, Hungary is committed to the development of its armed forces, so that beyond defending itself, it can contribute to common defence as well.

These days the Baltic airspace has become the most complex airspace in Europe and perhaps in NATO as a whole, the Minister said, according to a statement sent to The Baltic Times by the Hungarian Embassy in Riga.

The minister was referring to the tense international situation between Russia and the West due to the crisis in Ukraine.

“The Hungarian soldiers are determined, highly skilled and fully prepared to fulfill the lead role of Baltic Air Policing mission,” Lieutenant-Colonel Tamas Fekete, commander of the Hungarian Detachment, is quoted as saying in the statement.

“The goal of the Hungarian Detachment is to continue the excellent job of our allies, and to do our best to keep up the safe and peaceful environment for Estonia, Latvia and Lithuania.”

Some may be concerned, however, at what seems like an asymmetric move by NATO to scale back its air presence at a time when Russia has ramped up its naval and air force presence in the Baltic region over the last few years.

While NATO jets routinely conduct scrambles to head off any potential incursion into allied airspace, the Alliance has seen a steady increase in Russian military aircraft activity since 2012.

In the first 3 months of 2015, NATO observed a moderate increase in Russian military flight activity over the same period in 2014.

In 2014, Allied aircraft intercepted Russian planes over 400 times, 50 percent more than 2013.  Over 150 of these intercepts were done by aircraft from NATO’s Baltic Air Policing Mission.

NATO’s Baltic members, Estonia, Latvia and Lithuania, do not have the means necessary to provide air policing of their own territory.

So ever since the Baltic nations joined NATO in 2004, other Allies have taken turns protecting the integrity of their sovereign airspace, enhancing their collective security.

The majority of these air incidents were triggered by Russian military aircraft operating with their transponders off or not communicating with air traffic control, but some were due to other incidents such as a loss of communications with civilian aircraft.

So far in 2015, however, there have been no violations of Allied airspace by Russian aircraft, according information sent to The Baltic Times by NATO.

Russia has also set nerves on edge in the Baltic States by expanding beyond its borders with the annexation of the Black Sea peninsula of Crimea in March 2014, and its subsequent support to pro-Russian separatists in the east of Ukraine.

The Crimea annexation, in particular, has evoked chilling memories across the three Baltic States, which were annexed by the Soviet Union during the Second World War, only regaining their independence after the collapse of the Soviet Union in 1991.

Lithuanian President Dalia Grybauskaite, however, believes NATO’s recent decision to halve its Baltic air-policing mission was made in relation to NATO substantially strengthening its defensive capabilities in the Baltics elsewhere.

She pointed out that she considers the downsizing “not that significant.”
“I would like to pay attention to the fact that eight fighter jets will remain in the Baltic States.

That’s twice as many as we had before the Ukrainian crisis,” Grybauskaite informed the press. “So, we retain the double air policing mission.
“Poland will handle things on its own, so that downsizing is not that significant.”

She believes the support is reflected by NATO’s decision to establish a headquarters in the region, plus its decision to deploy U.S. heavy weaponry in the Baltic States of autumn 2015.

The president added that the scope and intensity of NATO military exercises across the region is “unprecedented.”

“We need to look into the security situation on the whole, and I think there’s no need for us to react to the downsizing of the air policing mission that much,” she continued.

“These are decisions that are made by taking into account all security bolstering elements in the region.”

Eoin MacNamara, a NATO specialist at the University of Tartu in Estonia, and an associate fellow at the Latvian Institute of International Affairs agrees with the Lithuanian president’s assessment.

“From the perspective of military planning, this lightening of the air policing mission is consistent with NATO’s overall strategy for its eastern flank,” he tells The Baltic Times. “At NATO, the word “scalability” is often used, this means providing enough protection and deterrence through a light presence that will not give Russia an excuse to fuel a dangerous security dilemma around the Baltic Sea.”

MacNamara also points to the need for NATO to show it is prepared to deescalate its military involvement in Russia’s backyard to present a more accommodating environment for the European politicians and diplomats attempting to make inroads into solving the wider crisis.

He does remark, however, that in private the decision for NATO to scale back its Baltic Air Policing mission “will privately disappoint many Baltic leaders and planners.”

In Estonia, he notes, it is common to hear commentary expressing the urgent need for “forward pressed conventional deterrence” in the Baltic region.

“This foresees a force projection much heavier than what senior NATO planners appear to have in mind given their perception of the current state of the crisis,” he adds.

However, the alteration to NATO’s Baltic Air Policing mission that took place as the Ukraine crisis escalated in April 2014 has perhaps unintentionally eased some inter-Baltic concerns that were present before the crisis.

“The Lithuanians worried that the number of allied fighter aircraft deployed at their Siauliai Air Base might be downsized in favour of Estonia’ newly constructed base at Amari,” says MacNamara. “It seems that Estonian diplomacy in 2012/2013 trumpeting the merits of Amari in this regard was seen by some in Vilnius as unhelpful and against the spirit of collective security.

Even under the NATO announced reduction, Siauliai keeps its 4 aircraft, so Lithuania loses nothing relative to what was there pre-crisis. Amari gains 4 considering the 0 permanent aircraft stationed there as part of the mission before the crisis.”