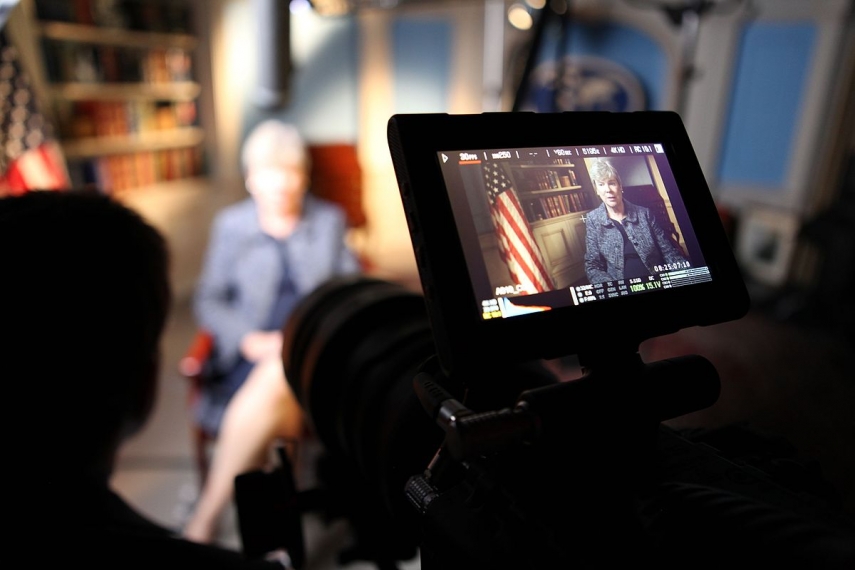 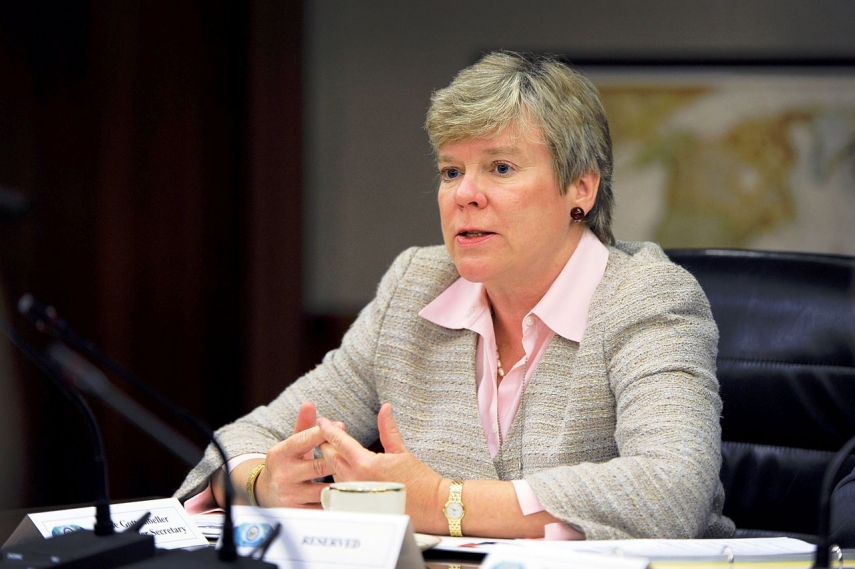 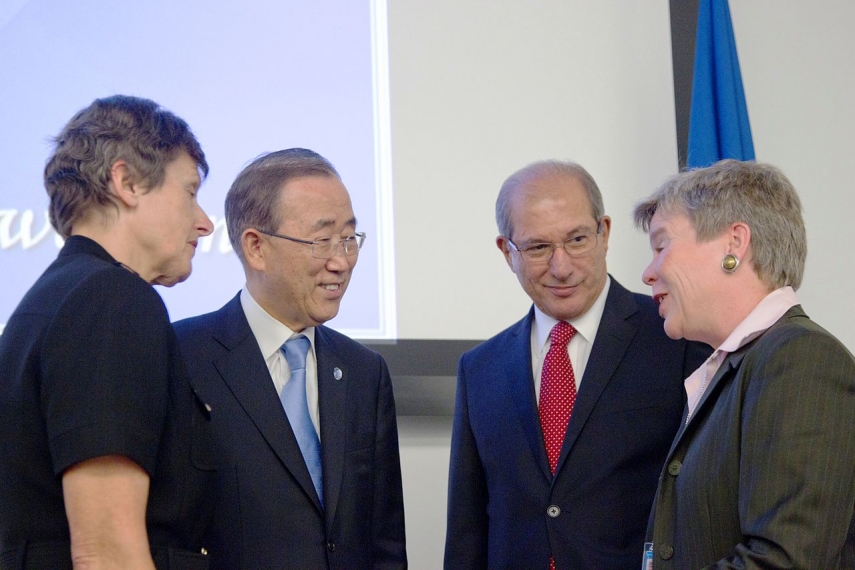 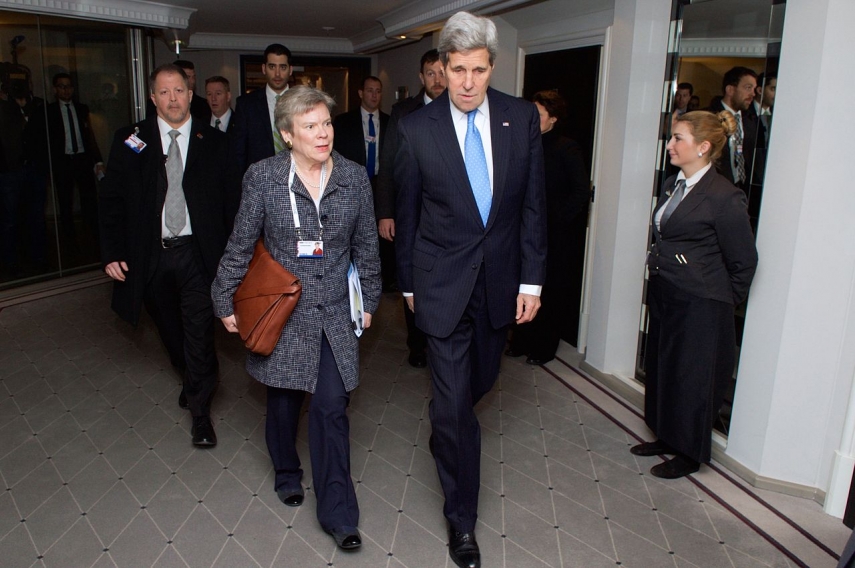 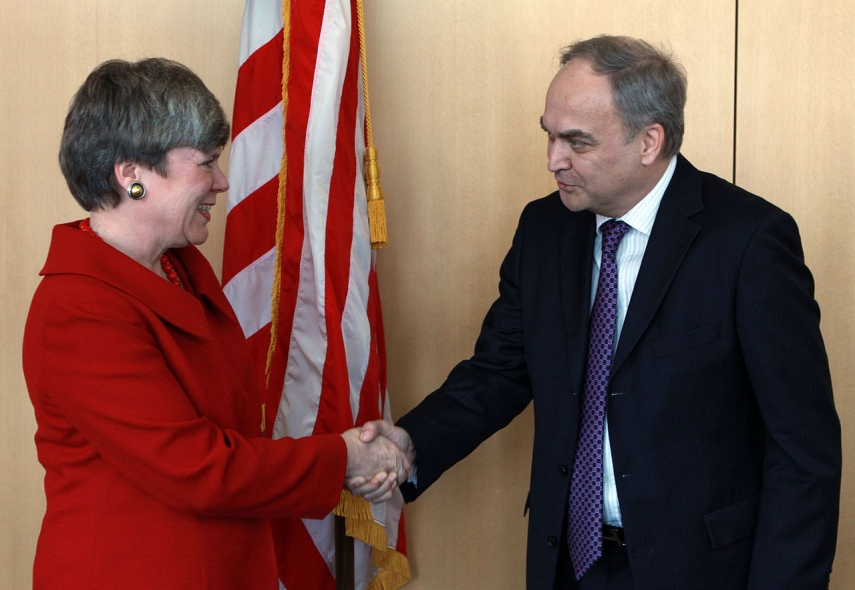 VILNIUS - The deployment of American tanks and fighting vehicles to Central and Eastern Europe is a proportionate response to Russia's aggressive actions toward the Baltic countries and NATO as a whole, a high-ranking NATO official, on a visit to Lithuania, said.

NATO Deputy Secretary General Rose Gottemoeller said in an interview with BNS that NATO was concerned about the continued build-up of Russian forces and Moscow's actions in Ukraine, but it did not see an immediate threat for its member states.

According to the US diplomat, NATO has an interest in dialogue with Russia in terms of reducing risks of incidents.

On these days, Lithuania marks the anniversary of the bloody 1991 Soviet crackdown against independence drive. 26 years on, do you see Russia being a threat to the independence of the Baltic states?

We are all concerned about Russia's aggressive actions in recent years – the incursion and seizure of Ukrainian territory in Crimea and continued build-up of Russian forces in the Western military district. These are matters of concern; there is no question about it. That said, NATO does not see an immediate threat of Russian incursion into NATO spaces. That is because NATO has done a lot in recent years to put into place deterrence and defense (…) against any power that will threaten the NATO alliance.

Just hours ago, US troops and tanks began arriving in Poland; part of them will be sent to Lithuania as well. Russian officials say this mission threatens their security and destabilizes Europe. What would be your response to that?

There was no plan for US armor to come back to Europe before Russia's threatening behavior toward the Baltic states, toward the NATO alliance as a whole, and that buildup that has been occurring that I referred to a moment ago as well as their seizure of Crimea. What the NATO alliance is doing, we always emphasize, is proportionate and measured and defensive, and that is truly how NATO is proceeding in a very also deliberate way, and not hurrying into anything.

Yes, you're quite right, through the so-called Atlantic Resolve operation there is US armor coming back to Europe and it is a response to what Russia has been doing.

I do want to emphasize that it is proportionate and measured because I've seen some of the Russian reporting that this is a hurried operation, this is somehow also bringing a lot of armor back to Europe but it's in truth is 3,500 personnel, 87 tanks, and 144 Bradley fighting vehicles. This is an important step but it is meant for deterrence and defense.

Is NATO ready to deal with the so-called A2/AD bubble in Kaliningrad and reinforce the Baltics in a case of the crisis?

Lithuanian officials say that in previous Zapad exercises in 2009 and 2013 Russians practiced the so-called “deblocking” of Kaliningrad, which effectively means the occupation of southern Lithuania. Are the planned Zapad 2017 drills a reason for concern?

I think that it is important to recollect how hard in the so-called Organization for Security and Cooperation in Europe for the past 40 years we have been working to ensure that training and exercises are not a cause for concern. We had a lot of work going on to ensure that there were confidence building measures in place through our Vienna document, transparency measures to ensure that if exercises were taking place they were properly notified.

I know, for example, that the Russian Armed Forces feel it's important to have snap exercises to be able to train their combined armed forces to operate in a rapid-fire manner. All right, that might be a legitimate military requirement to train toward, but when it's done in a way that shakes the confidence of neighbors and causes them concern that there could be a larger rationale and larger threat from these snap exercises, then that's another matter. (...)

Well, I think it remains to be seen. It's no question that Zapad'17 is part of the normal Russian exercise cycle that they carry forward and I would hope that we can have some opportunities to talk with them in advance about exactly what these exercises are going to entail, and so again to have an enhanced confidence.

NATO countries and NATO itself have always been transparent making use of the Vienna document to provide proper notifications and provide proper opportunities to observe exercises. We wish we saw more that from the Russian side.

How do you see the NATO-Russia dialogue?

Coming out of the Warsaw summit in July was I thought a good approach, strong and continued emphasis on deterrence and defense as absolutely necessary given the concerns that have a reason about Russian behavior in recent years, seizure of Crimea in February of 2014, so deterrence and defense are key, but also dialogue is an important aspect of how we need to interact now.

There is a mutual aspect to this. Russia says they are concerned about what NATO is doing, so we should be able to brief each other in that context about our activities as well, whether it is operation Atlantic Resolve or what is going on in the European Reassurance Initiative. These are I think all legitimate possibilities for future dialogue, but we in NATO need to be very clear-eyed about our own interest in this regard and I think the core interest we have is to reduce risks such as we've seen in the Baltic area with airspace incidents, that type of things. We want to reduce risks so that we do not have a possibility of a crisis emerging that could possibly escalate into conflict; nobody wants that, it's not in anybody's interest.

You mentioned airspace incidents over the Baltic Sea. NATO had previously criticized Russia for flying aircraft without transponders. Russia then publicly suggested agreeing to have all transponders turned on. But apparently, Americans seem to never agree to that. Wasn't that a failure of public diplomacy for NATO?

Well, I think the most important thing is to be pragmatic and look at a menu of activities and steps that can reduce risks. Transponders are not everything after all. Maybe we got too hung up on one particular aspect, but I think we now have a range of very pragmatic recommendations from the so-called Baltic Sea project team that took place over the last year, it's the international civil aviation organization that sponsored their work, they came up with very practical recommendations. It's a range of steps that are practical that we should be looking at.

Some Lithuanians were concerned to hear Donald Trump suggesting during the election campaign that US might not come to defend NATO allies unless they contributed enough to collective defense costs. What are the implications of his election to the security of Lithuania and the Baltic states?

First of all, I will say that Secretary General Stoltenberg and President-elect Trump had a very good conversation and President-elect Trump indicated his support for the NATO alliance. You know, politicians say a lot of things during election campaigns and it's important then afterward to see how they go forward in their administration. Clearly, we don't yet know, we still have a president in the White House and his name is President Obama, that's still for another week. So we don't yet know how president Trump's administration will handle these issues. Your readers might be interested in taking note the hearings for secretary of state candidate Rex Tillerson and secretary of defense candidate general Mattis. They have expressed firm support for the NATO alliance and firm support for allies both east and west. (...). It's a very consistent part of US policy to support our allies and you could see that very strongly expressed in Rex Tillerson's confirmation statement yesterday.

There have been media reports that Trump's administration could seek to replace you in NATO's structure. Do you have any indications about that?

I'll just give you the comment that Secretary General gave to the Washington Post which has we had no communication from the Trump team on that matter, no further process is afoot at NATO in that regard.

What role can NATO play in dealing with a cyber defense?

It has been a question that your neighbors just to the north, the Estonians, have had to grapple since 2007-2008. The cyber center of excellence in Estonia has focused a lot on this question, but if that was an early wake-up call for NATO, we have had many wake-up calls since.

NATO is actually doing a lot to work on cyber defense, cooperating with all the allies, Lithuania, by the way, is a very active participant in those efforts, in bringing your own national cyber defenses up to the highest standards. It's really clearly going to be an area that will be changing all the time, evolving all the time, the threat is not going to stand still and we will have to continue to pay attention.

But I do feel like NATO had an early wake-up call in what happened in Estonia, and we've had many wake-up calls over the years. These last ones surrounding the US elections and incursions into some of the US systems are but a symptom of what will be a continuing threat for us to deal with.

I believe and I can see that NATO is quite alert to these threats and is dealing with them. Are we perfect? By no means. But I think we've got a lot of experience and a lot of expertise and we're certainly awake to the threat we have to tackle.