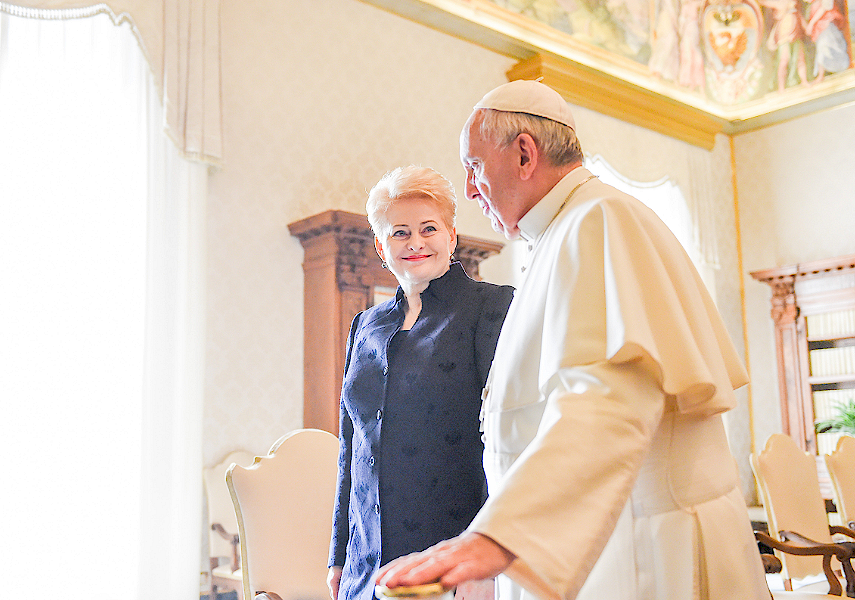 VILNIUS - At a meeting in the Vatican last Thursday, Lithuania’s President Dalia Grybauskaite invited Pope Francis to come to Lithuania.
Grybauskaite noted that 25 years of the diplomatic relations between Lithuania and the Holy See would be observed next year. In her words, Lithuania has always, especially in the most difficult moments, felt the Vatican’s support, and the Pope’s encouragement is important today amid the new challenges.

“The people of Lithuania have always felt the Vatican’s spiritual support – both in defending freedom and building their state. Today Pope Francis’ moral authority and leadership contribute to important changes that Lithuania, Europe, and the whole world need to advance peace, the well-being, mutual concord, and unity of people. The Holy Father’s new approach, his personal example, and encouragement are important to all who relentlessly defend freedom and human rights, fight for a more transparent and fairer life, and build a responsible and more merciful society,” the president said in a communique cirulated by her press service.

The topics discussed during the meeting include the refugee crisis, military conflicts, regional tensions, the need to consolidate the United Nations, and the organization’s role in the settlement of conflicts, ensuring humanitarian aid to the people fleeing poverty and war.
According to the press release, Lithuania and the Vatican are concerned about the situation in Ukraine, a nation suffering from aggression. The Pope has referred to the war in eastern Ukraine as fratricidal, calling for the restoration of peace in accordance with international law.

This is Grybauskaite’s fourth visit to the Vatican.
“He is not only only the Holy Father but also an exclusive personality, a moral leader worldwide who finds people the most (important), and who fights privileges even inside the Church and conducts reforms,” Grybauskaite said in a statement cited by her press service.
“He is indeed an example for us, as politicians, for all in Lithuania, and the rest of the world,” the Lithuanian president added.

She said the Pope could not yet promise to come to Lithuania, however, Grybauskaite expressed certitude that she interested the Holy Father in her country, the region, and their challenges and importance.
In her words, the Pope is “very likely” to visit within the next few years.

“The moral leadership is something we in the region indeed lack and need, we need the encouragement ... Although we have been free for 25 years, we are still liberating from the moral grip and the past,” the Lithuanian president said.
John Paul II was the first and only pope to visit Lithuania – he toured the Baltic state in 1993.
According to the news agency Rome Reports, ​the President and the Pope spoke about welcoming refugees to Europe, conflicts in the Middle East and Ukraine, and what life is like for the 77 per cent of her country that identifies as Catholic.
Grybauskaite presented the Pope with the images of two most venerated paintings in Lithuania – Our Lady of the Gate of Dawn, Mother of Mercy, and the Divine Mercy. The reproduction of Our Lady of the Gate of Dawn also decorates the Lithuanian Chapel at the St. Peter’s Basilica in the Vatican.

A few weeks before the start of the Jubilee Year, the gifts are appropriate. In Lithuania, a Jesus of Mercy image designed according to Saint Faustina Kowalska’s description was just shown publicly for the first time.
The president also gave the Pope a jar of honey from her bee hives, with an explanation that “this honey was made in Lithuania and the label was designed by children.”
After the photos with members of her delegation, she did not want to leave without giving the Pope recommendations for how to use the honey.
“Bread with honey and fruit. It would be enough for breakfast.”
Although Pope Francis said he only needs the traditional Argentine drink mate for energy in the morning, the honey might help prevent a cold in the winter.

Another leg of her Vatican trip included a meeting with the Order of Malta, where Grybauskaiteė was awarded the Collar pro Merito Melitensi, the highest Sovereign Order of Malta’s order conferred in recognition of special merits in promoting charitable activities, volunteering, humanitarian values, and assistance to those in need.

The President is an active supporter of the charitable activities carried out by the Order of Malta in Lithuania. The Order of Malta Relief Organization has brought together around 1 000 volunteers to provide social assistance in 28 Lithuanian cities. Social day care centers for children operate in 10 Lithuanian cities, and the projects Meals on Wheels and Social Homecare, delivering assistance to single elderly people who live in poverty, are carried out across the country. This year, the fundraising campaign Maltese Soup will be launched for the tenth time in Lithuania.