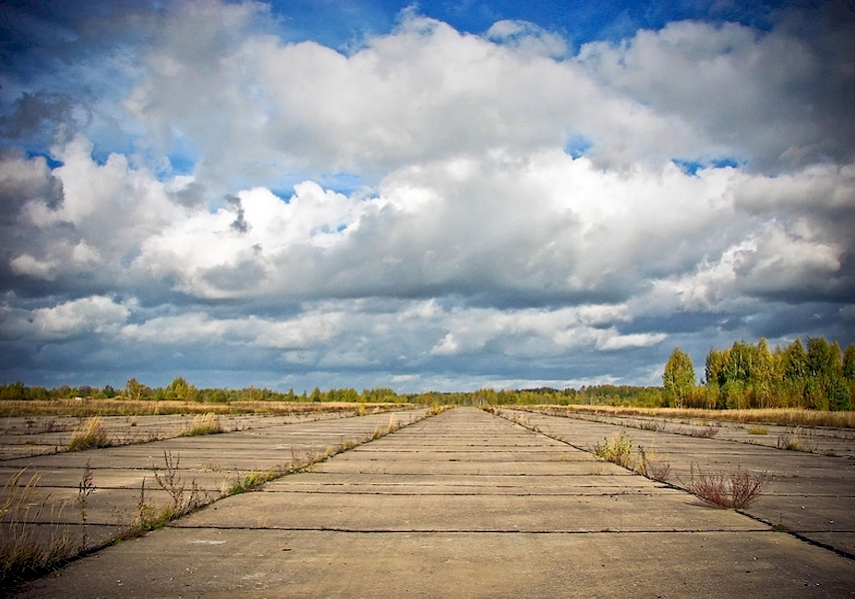 DAUGAVPILS - “These planes, fitting 50 passengers and being able to fly 2,000 km distances, will fly from Daugavpils airport in 2015.”
Such was the promise in the airport’s official brochure many years ago.
2015, quite clearly, is here already. But nothing even vaguely resembling these planes can be seen in the sky anywhere near Daugavpils.

The dusty old brochure points to a number of economic advantages — mostly to do with its useful geographic position as an outpost on the EU’s eastern edge, and as a potential hub for flights into Belarus and the Russian Federation.
The brochure also points to the airport as a potential destination for tourists looking to check out the beautiful lakes of the surrounding Latgale region.

These advantages have not been incentive enough, and neither have the arguments that Daugavpils needs an airport for its own regional development. The surrounding region of Latgale may be the poorest in Latvia, and one of the poorest in Europe. But that has not won round policy makers in Riga, nor has it earnt the airport any allocations from the EU’s regional development fund, which pumps billions of euros into Latvia.

The surprising aspect of the fund is that one of its core mandates is to improve transport infrastructure, but Daugavpils airport has somehow missed out. The airport remains defunct.
This was not always the case. Before the Second World War, there were not just one, but three aerodromes fully functioning in the vicinity of Daugavpils.

In two of those, including the one that carries the name of Daugavpils airport now, the 49th Soviet aviation division was stationed, and it also served as a base for the 372nd fighter-bomber aviation regiment during the Cold War.
In the beginning of the 90s, however, it was denationalized and never fully regained its standing, either as a passenger airport or for military purposes.

But in 2005, Daugavpils City Council founded “Daugavpils Airport Ltd. ” The company purchased additional land for the purposes of the airport, as well as preparing documentation for the airport development in order to woo investors.
As the city council declined to spend its own budget on this project, the counil took a loan of 1 million lats (around 1.5 million euros). Around 0,9 million euros still needs to be paid back by 2021.
This brief history of the airport, however, doesn’t answer the question why there is still little to no progress, despite glimmers of initiative over the last 10 years.

Another curiosity is that, despite the airport technically not being in existence, and despite little sign of that changing, the airport still has its own chairman of the board.
Janis Kudins, the chair member of the airport, tried to explain this rather complicated issue to The Baltic Times:
“At the moment there is indeed no activity going on. We’ve been trying to attract various investors for years now, and had some serious ones,” he says.

“Unfortunately the crisis has ruined many possible deals. But you also have to understand,” he implores. “That the airport business is one of trickiest ones — many investors don’t want to deal with it because they don’t get any considerable profit as fast as they would like to. It’s more of a long-term investment.”
Without further funding, he pointed out, it would be impossible for this airport to take off again.
“Let’s say, we would need at least around 15 million euros to start any kind of flights, and it would take years to pay off, in a good case scenario,” he notes. “But there are also bad case scenarios, just look at many Spanish airports which got substantial EU funding, but are not functioning now.”

Funding is another interesting matter to consider in this case, which is quite different from other regional airports. The Daugavpils airport was never trying to get money from the EU funds, unlike the airports in Liepaja and Ventspils.
Why no attempt at applying for some of the billions of euros heading to Latvia as part of the regional development fund?
It’s a strange answer. When the EU was allocating money for regional development, Latgale lost out due to a decision made at the state level, even though it had the lowest development index out of all of the regions in Latvia.
All regions received equal levels of funding in the latest round of EU regional development funding from 2014-2020, despite Latgale being in far more desperate need of funds.

As Mr. Kudins commented: “it seems fair, but as it is already quite obvious- if you develop every region equally, the poor regions will still stay poor and rich regions will get richer”.
He mentioned that the airport in Latgale would be crucially important for its regional development, and if this project finally goes through its initial stage, it could potentially attract many other projects and investors.
The officials from Riga, however, do not seem to consider this project to be a priority or even a rational use of financial resources. As Arnis Muiznieks, the director of the Aviation department in the Ministry of Transport, told The Baltic Times:
“The initial activities from Daugavpils city council were not effective enough when they were given a working airport before”, he said, referring to the denationalization of the airport in 1993.

What Daugavpils city council could do about the denationalization of the airport back in the turbulent years of the early 90s is an open question, and it is questionable whether the activities related to the military airport at that time can be evaluated as effective or not, or relevant to the decision making process over twenty years on when the situation has changed.

Mr. Muiznieks admitted that “taking into account the size of the city, its location and the potential for development in the future, there could be a place for an airport in Daugavpils. At the moment, however, the renovation of the airport, or building it up from a scratch, would require multimillion investments, which cannot be considered as rational use of the financial resources and is not a development priority”.