Fighting spirit of Ukrainian defenders is admirable, but victory will not be easy and fast - Jurass 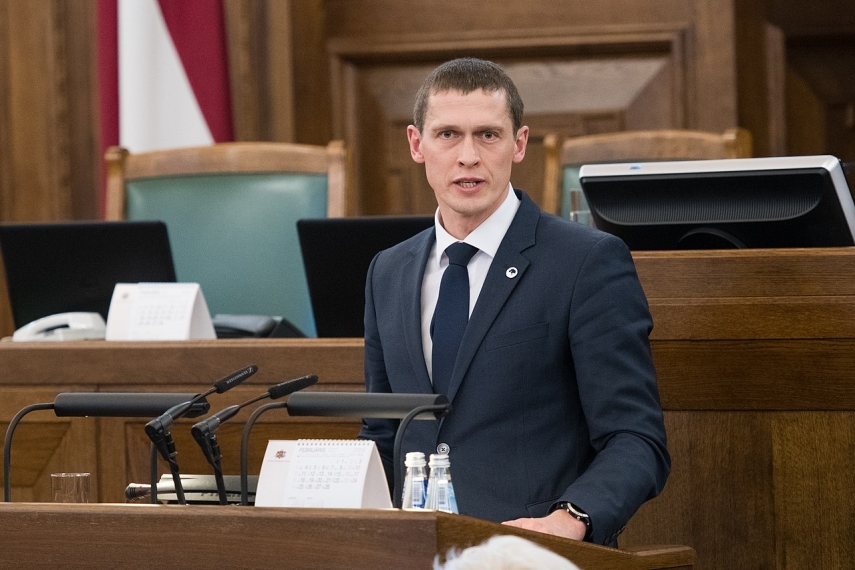 RIGA - The fighting spirit of the Ukrainian defenders is admirable, but the victory will not be easy and fast, the former Latvian MP Juris Jurass (Conservatives), who last week relinquished his MP mandate and joined the Ukrainian defense forces told LETA after his first week in Ukraine.

Jurass arrived in Ukraine as a volunteer in early March because he could not simply watch Russia try to destroy a democratic state and murder civilians, including pregnant women and children, by committing war crimes.

Of course, it is possible to support Ukraine with donations, accommodation for refugees or similar support, but he felt that this was not enough, so he went to the war-torn country.

"You can, of course, whine about my actions, because I don't have direct experience in combat, but support in warfare does not automatically mean sitting in trenches. At the same time, I have had operational experience when I worked for the Corruption Prevention Bureau, and there are countless functions that volunteers can help the Ukrainian army. If someone does not think that is enough, then welcome to Ukraine and demonstrate your skills," stressed Jurass.

Initially, he took part in the evacuation of civilians from endangered areas near Kyiv, transporting residents displaced from Russian bombings. He also dealt with logistical issues for Ukrainian defenders.

Currently, Jurass, along with other foreigners, has joined the volunteer battalion and is performing the tasks assigned by the commander in the cities of Brovary and Irpin in the Kyiv region. Jurass did not want to comment in detail his tasks.

He also did not comment on whether the Ukrainians had provided him with a firearm, but he, like any volunteer, was given a uniform, insignia, a harness, a helmet and other necessary items.

Jurass has also completed formalities through the Ukrainian Embassy in Latvia and the National Armed Forces in order to be able to fight legally on the side of the Ukrainian army.

His experience in Ukraine so far shows that the Ukrainians, as in a war situation, had major organizational problems, but they are being improved day by day.

"The fighting spirit of the Ukrainians is something unique and admirable. I believe in the victory of Ukraine, and with their motivation it will not be possible to subjugate this nation, but no one says that the victory will be quick and easy," Jurass emphasized.

It is important for the Ukrainians that they are not left alone, and the support of the West, including military support, is extremely important.

The flow of Western support is very extensive, and Jurass has no doubt that Ukraine's defenders will soon have the potential to try to "push back" the Russians.

Volunteers without military experience are not on the front lines, and rightly so, but volunteers also have many different tasks, because warfare in general requires a lot of functions, he said.

"In this respect, the Ukrainian organization is sensible, because it is a regular army that brings with it the heaviest battles on its shoulders. Not everything changes with weapons and trenches. Everyone has their place," Jurass added.

While in Ukraine, Jurass, as a representative of a NATO member, has received many questions about why NATO does not establish a no-fly zone in Ukrainian airspace, as it is difficult for Ukrainians to understand how the Western world can watch the nation's suffering and Russia's war crimes.

At present, Jurass has not thought about how long he will stay in Ukraine. "For as long as it takes, however, I do not currently believe that this war situation will be resolved so quickly," Jurass added.

He also pointed out that many people have left Kyiv and that the empty streets and ruined buildings had given him a surreal feeling.

As reported, Jurass, a graduate of the Latvian Police Academy who for several years worked as a senior officer at the Corruption Prevention Bureau, has left for Ukraine to help the Ukrainians defend their country.

It has also bee reported that by last Friday five residents of Latvia had officially enlisted to fight in the war on Ukraine's side.

On February 28, the Saeima amended the National Security Law allowing Latvian citizens to join the Ukrainian military as volunteers.

Volunteers that want to enlist with the Ukrainian Armed Forces' recently established International Territorial Defense Battalion have to register with the Ukrainian Embassy in Latvia. After receiving the embassy's approval, the volunteers have to write a letter to the NAF Mobilization Office, giving their personal details.