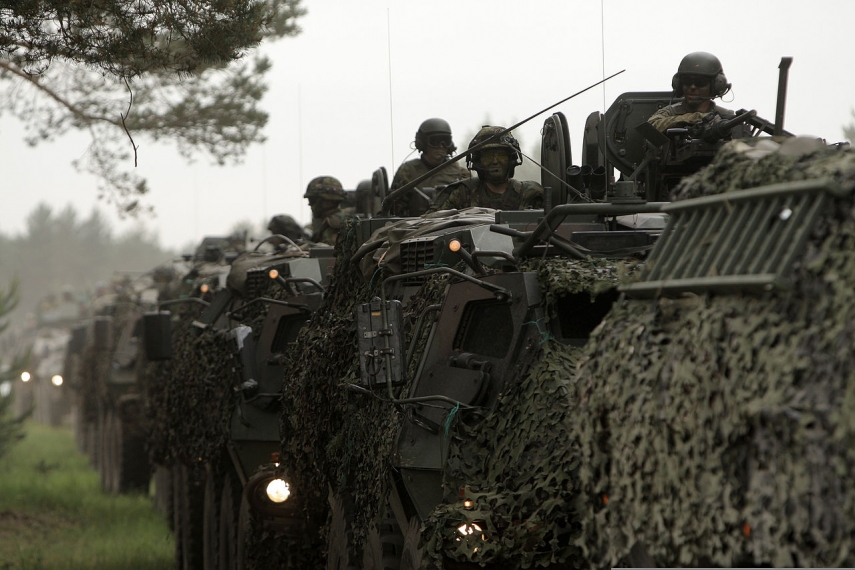 TALLINN - The weapons manufacturer EuroSpike GmBH has submitted a bid to the Estonian Center for Defense Investment in a tender to supply long-range antitank systems to the Estonian defense forces, the value of the framework contract to be concluded for seven years is approximately 40 million euros.

"EuroSpike submitted today [on Monday] at 1 p.m. an offer to the Center for Defense Investment for the procurement of long-range antitank systems," spokesperson for the center Ingrid Muhling told BNS.

Muhling said that based on a preliminary assessment, the sole offer by EuroSpike is correct and compliant with the requirements provided.

"Center for Defense Investment is to assess in the coming weeks the compliance of the sizable offer to all tender criteria. In case of a positive assessment, the bid will be declared to be in accordance with the requirements and more detailed negotiations with the tenderer are entered into," Ingrid Muhling said.

The procurement of a long-range antitank system is a competitive negotiated procedure as a result of which a framework contract is to be concluded with the supplier for seven years. The estimated cost of the contract that must include an option for the purchase of additional units is 40 million euros.

Priit Soosaar, head of the department of procurement at the Center for Defense Investment, said that the weapons to be acquired must be in serial production and in use in the armed forces of at least one NATO member state. The plan is to buy at least 18 weapons systems complete with ammunition and the supplier must also supply auxiliary equipment, provide technical support and training.

Karileet said that the new equipment which has the so-called fire-and-update operation mode is an improved version of the antitank weapons currently in use by the defense forces. A nose-mounted camera on the missile enables the operator to receive real-time intelligence and update target information even when there is no direct sight between the operator and the target.

The weapon, ammunition and auxiliary equipment need to be man-portable as well as usable when attached to a vehicle, he added.

The weapons systems to be bought are meant for an upgrade of the weaponry of the antitank companies of Estonia's infantry brigades, where conscripts will be trained in their use.

"Training in the use of the said weapon systems is very fast, cost-effective and efficient thanks to modern simulation and training equipment. Training for instructors, active-service personnel of the Estonian defense forces, is also a substantive part of the procurement," Karileet said.

Spike LR missiles, which have a maximum range of four kilometers, are used by the defense forces of Latvia and Lithuania, for instance.

The armaments of the Estonian defense forces currently include the Milan and Mapats antitank missile complexes and the Javelin antitank systems.

Karileet told BNS in October that Mapats is included in the armaments of the defense forces, but is no longer in active use. No ammunition is produced for Mapats anymore and the antitank missile complex itself is outdated, he said.

"Each antitank system in use in the defense forces and each new system to be procured has its own purpose. Equipment is developing constantly and certain systems, like Milan, are approaching the end of their life cycle. The procurement of new armament systems and the constant updating of the capabilities of the defense forces is usual," he said.

He added that Estonia possesses medium-range antitank capability at present.

"According to the specification in use in the defense forces, Javelin is a medium-range antitank system," Karileet said.

Along with the purchase of infantry fighting vehicles, self-propelled artillery, new automatic firearms and replenishments of the stocks of wartime units, the acquisition of the antitank systems is among the priorities of national defense related procurements of this decade.

EuroSpike GmbH belongs to the German arms manufacturers Diehl BGT Defense and Rheinmentall Defense Electronics in equal portions of 40 percent, while 20 percent of the shares belong to the developer of the weapons system, the Israeli arms manufacturer Rafael Advanced Defense Systems via the Dutch holding company ERCAS B.V.

We have a moral duty to hold war criminals to account

Estonian interior minister: Natl defense should be financed with loan or new tax

Problems of plastic pollution, water, forests must be solved