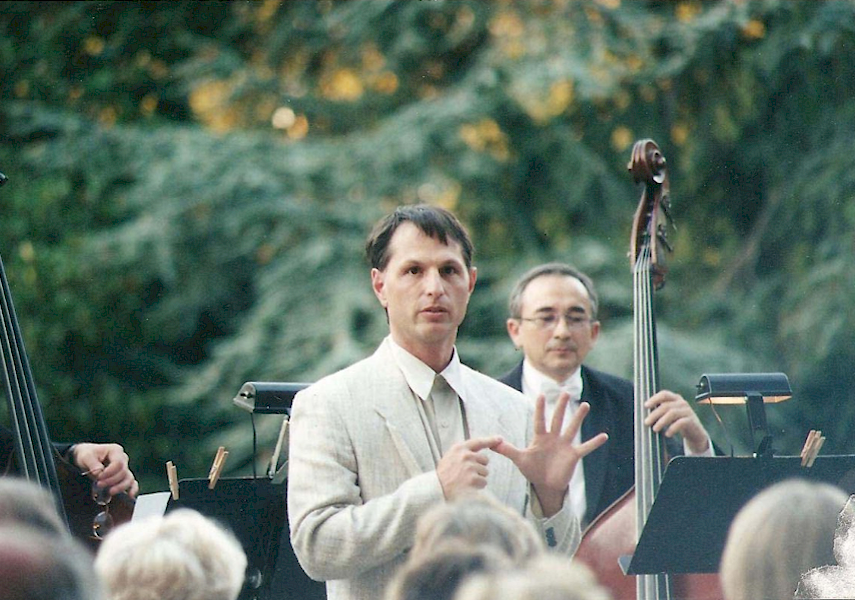 The annual Tytuvenai Summer Festival has ended with a world premiere of a concerto for violin and chamber orchestra with winds by esteemed American composer David Aaron Jaffe. The concerto was performed in a packed church of the Tytuvenai monastery by America’s leading contemporary violinist Karen Bentley Pollick and the Lithuanian National Opera and Ballet Theatre Orchestra conducted by maestro Robertas Servenikas.

Being known as a composer and audio software architect of an international reputation, he has written over 90 works and has taught at Princeton, Stanford, Melbourne University, and University of California in San Diego. His Silicon Valley Breakdown for synthesised plucked strings is regarded as a landmark of computer music.

How did it happen that these two internationally renowned musicians came to Tytuvenai, a small Lithuanian town with the population of less than 3,000 people, mostly known to pilgrims who come here to visit the Tytuvenai monastery regarded as one of the gems of the Baroque architecture in Eastern Europe?

“I am very happy to be for the first time in Lithuania where three of my four grandparents were born,” was the opening sentence of David A. Jaffe’s pre-concert talk.
The audience exploded with applause.
“I think it was very important to the people of Tytuvenai,” Karen Bentley Pollick later commented on this revelation.
I also thought that this news came as a surprise. David A. Jaffe came to Vilnius a week before the premiere. He worked with the orchestra, the conductor, and the soloist through all rehearsals of the concerto. He gave a talk to composition and electronic music students at the Lithuanian Music and Theatre Academy. He met with the Chairwoman of the Lithuanian Composers’ Union. And he did not mention his Lithuanian heritage once until the very last day of his visit.
“As a kid, I was not even sure of the geography of my grandparents’ birthplace,” David A. Jaffe explained when I asked him what he knew about Lithuania before actually visiting it.
“They came to the US before World War One. I knew they were from Vilna (they always called it the Yiddish name). But Vilna was not even necessarily a part of Lithuania when my grandparents were there. So sometimes I heard they were from Poland, sometimes I heard they were from Russia, but I knew for sure they were from Vilna. Until I arrived here, Vilnius was a vague place on the map to me, somewhat surreal. So it is very enlightening to have it become a real place.”

It turns out the composer’s grandparents never talked about their homeland much. The only cultural legacy that David A. Jaffe inherited from his ancestors was the Yiddish language and folk music.
“My grandfather was a mandolin player. So was my father. At the turn of the 20th century in New York City there were a lot of mandolin orchestras. My father played in them. I learned a lot of music from him, mostly, Yiddish and European folk tunes,” the composer  reminisces.

In fact, David A. Jaffe was initially thinking of including Lithuanian folk music into his concerto “How did it Get so Late so Soon?” But the more he thought about this intention, the more he realised that he did not know enough about Lithuanian folk music to make it meaningful to Lithuanian audiences.
“I have used a lot of Yiddish music that I learned from my father, instead,” the composer explains. “Of course, often what I thought was Yiddish music many times was not Yiddish music at all. It could be Bulgarian or something else … These tunes were simply things that my father had heard and learned on the mandolin. Then I learned them from him. It is an influence on which I often draw in my music. The folk is part of my language that helps me cross time and continents. When they appear in my music, folk elements often symbolise grassroots strength and creativity of people in the face of difficult economic or political situations.”

David A. Jaffe took the title of the concerto from a short poem by Dr. Seuss who was a political cartoonist during the Great Depression. Later, he wrote children’s books whose characters were magical creatures that the author invented himself. All of these stories always had an allegorical moral, usually, making fun of power and selfishness. The composer chose this title for a reason: “The title means a number of different things to me, and one of them is the idea of my grandparents, big geographical distances, and time passing so quickly. Music is uniquely able to convey meaning that is very difficult to convey in other art forms. You have counterpoint and you have pitch so you can basically say multiple things at the same time that may be contradictory and still make sense.

“The theme of Dr. Seuss’s stories and the theme of connection in time may seem to have nothing in common, but to me they are related in the sense that Dr. Seuss grew up during the time of Depression when there was a lot of folk music, a lot of which was played by people who were having a hard time. I may not know much about Lithuania, but I know enough to realise that Lithuanian people have lived through many struggles. So when I was looking for stories that could draw the audience into my thought process and give them images to associate my music with, I was looking for stories to which Lithuanian audience could relate.”

Concert given for free

So David A. Jaffe chose the following three stories as the source material for the three movements of his violin concerto: a story about a tyrannical turtle who climbed on other turtles’ backs so that he could reach the stars and rule over the universe, but was overthrown by a sneeze of a little turtle at the bottom of the pyramid; a story of two creatures who would not give way to each other on a narrow bridge; and a story of one race of magical creatures who oppressed another race of magical creatures because the latter did not have stars on their bellies, both races reconciled when they had to unite against a greedy opportunist who started removing from and adding stars to bellies for money.

One more extraordinary fact about the world-premiere of David A. Jaffe’s violin concerto in Tytuvenai, as if there were not enough: the composer donated the concerto to the Tytuvenai Summer Festival for free.
“We made efforts to do fundraising, but we were not very successful,” admitted the composer before adding, “So I decided I was going to do it anyway because it was an opportunity to work with a good conductor, a good orchestra, a good violinist, and to see Lithuania for the first time.”

“If one is a musician, one wakes up every morning and must play or be involved in music somehow. There is no choice in the matter,” firmly asserts violinist Karen Bentley Pollick, who played the solo part at the world premiere of “How did it Get so Late so Soon?” in Tytuvenai. “The crime would be to not do it if you have an idea. So we did this beautiful project. This whole event was beyond my wildest dreams. It was an opportunity of a lifetime for David A. Jaffe. He worked extremely hard on this since May 2016. I believe this will be his signature piece. My dream is that future, especially American, violinists will want to play it. David A. Jaffe is currently re-orchestrating the piece for a chamber orchestra in Boulder, Colorado. On that programme there will also be Appalachian Spring by Aaron Copland originally commissioned for Martha Graham.”

Lithuanian element of musical programme ahead

“I find Lithuanian music very compelling,” states the musician. “I noticed that Lithuanian composers use minimalist composition techniques, but their root material derives from folk music. There is a certain rhythmical element in Lithuanian classical music that makes it so compelling. It is pulsing. I would love to perform many of these pieces,” she said.
Pollick turns out to be a woman of her word. She has already added a few pieces by Lithuanian composers to her solo programme, Violin, Viola, and Video Virtuosity, that she will perform on Sept. 22 in Klaipeda, at the Music of Change festival (“Permainu muzika”).

“I like to think about this entire project as an autobiographical piece with many chunks: people I have met and made art with,” the violinist reflected on her upcoming performance.
“The Lithuanian element of the programme will be a lyrical piece by Gediminas Gelgotas called To the Skies, Loreta Narvilaite’s solo piece for violin, Zibuokle Martinaityte’s beautiful 13-minute piece called Serenity Diptychs. The grand finale of the programme will be Duetto con Bobik, American composer Brian C. Moon’s piece featuring my late hound dog’s singing, which I play to a video created by Lithuanian director Aiste Ptakauske,” she says.

Pollick will continue showcasing the above-mentioned Lithuanian music and video art in her Violin, Viola, and Video Virtuosity programme all around the world. She has already got a performance scheduled in New York City on Sept. 28. She will give a repeat performance of David A. Jaffe’s violin concerto “How did it get so Late so Soon?” with the Boulder Chamber Orchestra, conducted by maestro Bahman Saless, in Boulder, Colorado on Nov. 11, Veterans Day.