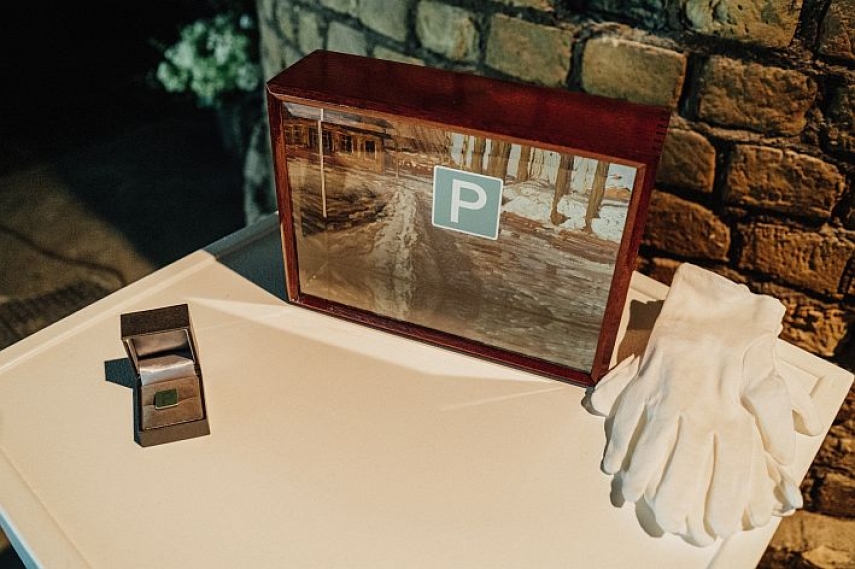 Having gained the highest score from the international jury, Ieva Epnere was awarded the sixth Purvītis Prize at a special ceremony on 12 April 2019 at Art Centre Zuzeum in Riga, Latvia.

At a ceremonial event, the winner of the Purvītis Prize 2019 was announced on behalf of the jury by Māra Lāce, Director of the Latvian National Museum of Art (LNMA), Jānis Zuzāns, patron of the museum and Chair of the Board of SIA Alfor, and Gregor Muir, Director of Collections, International Art at Tate (UK). Ieva Epnere was awarded the Purvītis Prize along with the substantial cash prize of 28 500 EUR (before taxes).

The laureate of the sixth Purvītis Prize was determined by an international jury of seven members. The final decision regarding the winner of the Purvītis Prize 2019 was taken at a closed jury meeting following extensive debates that lasted more than three hours and an evaluation of the exhibited works by all eight finalists: Ēriks Apaļais, Ieva Epnere, Kristaps Epners, Gints Gabrāns, Roman Korovin, Paulis Liepa, Rasa Šmite and Raitis Šmits, as well as the text group Orbit (Artūrs Punte, Vladimir Svetlov, Sergey Timofeyev, and Alexander Zapol).

“The jury’s decision was taken in two rounds of voting, and I have to say that after our debate there were two clear leaders, but in the end Ieva Epnere gained a significant majority of the vote. During the jury’s discussions, Ieva’s piece Sea of Living Memories emotionally unleashed a true sea of living memories for us. In the end we concluded that the personal and multi-layered story, in which the artist seeks to make sense of complicated history, the formation of identity and collective memory in the post-Soviet reality, is artistically intelligent, more impactful than the documentary genre, universally understandable, it combines experience, emotions and quality. It raises the fragile issues of freedom and captivity, of borders; it makes you think about the balance between nostalgic memories of the past and hopes for the future,” explains the Chair of the jury, Director of LNMA Māra Lāce.

Ieva Epnere was nominated for the Purvītis Prize 2019 Final and shortlisted by the experts for her solo exhibition Sea of Living Memories at kim? Contemporary Art Centre (08.12.2016–15.01.2017). Sea of Living Memories tells the story of Latvia’s complicated Soviet past and its relationship with its present. The trigger for the artwork had been the annexation of Crimea. The artwork holds deep personal meaning for the artist as it is based on her own family, experience and emotional background. Ieva is from Liepāja, her father is ex-Soviet military, a Russian naval officer from Siberia, while her mother is Latvian. Wanting to record the sea visible in the artwork in all of its possible shades, the artist filmed it from February until late summer 2016 in her native Liepāja where her parents still live. The sea has symbolic meaning for Ieva – it can hide some things and throw others out onto shore. Sea of Living Memories is a multi-disciplinary artwork – a movie, documentary video stories, a tapestry, a series of photographs, at times each of these units is exhibited as an individual piece.

The exhibition of Purvītis Prize 2019 candidate works will be open to the public in the Great Hall at the main building of the Latvian National Museum of Art until 9 June. The exhibition is curated by Daiga Rudzāte. Exhibition design created by artist Martins Vizbulis.

This year for the first time in the history of the Purvītis Prize, a lifetime achievement award was presented – to painter Džemma Skulme (1925), whose strong creative spirit and powerful personality, vitality, loyalty to artistic ideals and ability to constantly be on a creative wave is remarkable. Along with the award, Skulme also received a cash prize of 10 000 EUR (after taxes). A Purvītis Prize 2019 popular vote took place on portal Delfi from 24 March until 10 April allowing viewers to vote for their favourite of the eight finalists selected by the experts. The award to the winner of the popular vote was presented at the special ceremony by Ingus Bērziņš, Editor-in-Chief of Delfi. The winner of the popular vote was also Ieva Epnere.

In order to ensure continuous assessment of visual arts in Latvia, the expert group of the seventh Purvītis Prize has already begun its work. From 1 January 2019 until end of December 2020, it will regularly nominate artists for the next prize. The expert group consists of Līna Birzaka-Priekule, exhibition curator and Head of the Creative Studio at the ARSENĀLS Exhibition Hall / LNMA, Laima Slava, art historian, Editor-in-Chief at publishing house Neputns, Ieva Kalniņa, art historian and curator, Dr. art. Andris Teikmanis, professor and Prorector in Study and Research Work at the Art Academy of Latvia, Kaspars Vanags, curator and art theoretician, Kārlis Vērpe, philosopher, and Alise Careva, founder and Director of gallery Careva Contemporary.

The award is named after the Old Master of Latvian painting Vilhelms Purvītis (1872–1945). He was an outstanding artist and art professor who won critical acclaim both at home and internationally. The co-founder of the national school of art and the pioneer of the national landscape painting, Vilhelms Purvītis is one of the all-time most influential figures in Latvian cultural and art life. He was the Head of the Riga Art School, the Director of the Riga Museum of Art and the founder of the collection of Latvian art, the founder and the first Rector of the Art Academy of Latvia and for many years, the Head of the landscape masterclass at the Academy, the Commissioner General of all the representative Latvian art exhibitions abroad during the interwar period.

The authority, educational work and artistic style of this prominent landscapist and Fellow of the St.Petersburg Academy of Art has left an impact on several generations of Latvian artists. A wise and farsighted culture politician, Vilhelms Purvītis was an active supporter of the young artists of the time and discovered a number of talented painters who later played important roles on the Latvian art scene. The name of Vilhelms Purvītis has become a sign of national identity, both in the history of Latvian art and in the eyes of the general public. Therefore the Prize is a kind of synthesis of established, classical values and the seemingly momentary, contemporary art processes.

The Purvītis Prize is awarded biannually to an artist or a group of artists representing Latvia with outstanding work, which is deemed to be deeply connected to the developments of the era and forming a bridge between contemporary life, spiritual ideals and intrinsic values. The artist rated highest by a panel of experts and a specially established international jury is selected as the winner. The Prize is 28 500 EUR (including taxes).