Why the idea of Russian invasion in the Baltics is absurdity 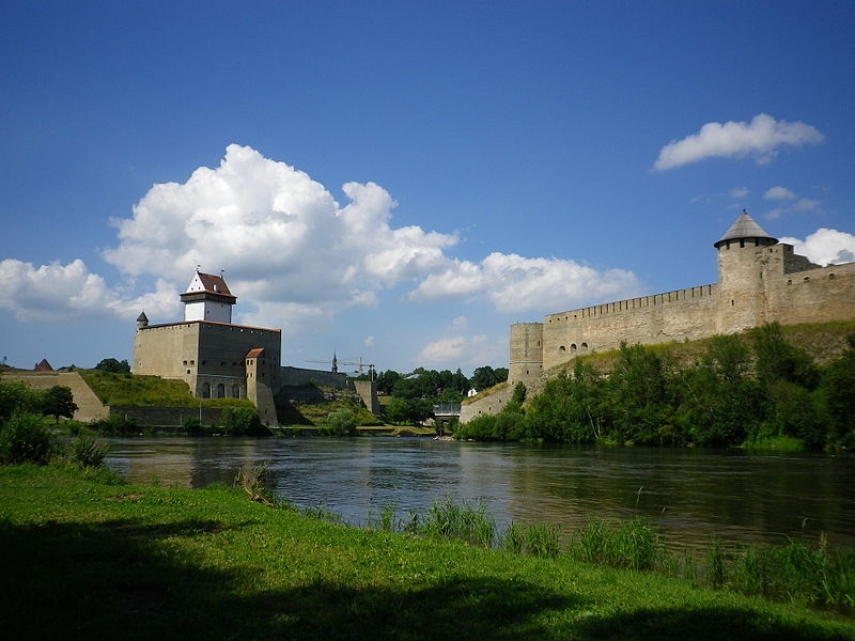 STANDING OFF: The Estonian-Russian Border at Narva - Would the Russians ever cross the river and invade?

WARSAW - Since the annexation of Crimea and especially since the beginning of active war in the east of Ukraine, Russia’s neighbors to the north and west of Ukraine have grown more and more concerned about their own security. The debate of “how to protect ourselves if Putin invades” is especially intense in the Baltic States. Understandable due to  historic reasons, it is still drastically unrealistic and absolutely pointless.

Reasons behind Russian involvement in Ukraine may vary from geopolitically motivated “realism” to emotional and psychological incapability to accept the idea that “Ukraine is not part of Russia”. Ukraine was the single most important state in the entire post-soviet area that could have theoretically helped Russia to build economic and political entity capable of claiming regional leadership. Moreover, annexation of Crimea served highly important domestic goals that allowed Putin to see the continuation of his unchallenged rule at home.

But the most important thing is that Ukraine is not a member of NATO, and the Kremlin calculated correctly that neither European nations nor the US will be ready to risk war over it. By this logic, even moving a single Russian paratrooper into the territory of the Baltic nations would imply inevitable confrontation with the entire NATO bloc. And it is not a mystery for people in Kremlin, that NATO surpasses Russia in every category of military equipment imaginable. Such a collision, if it happened, would lead to an inevitable use of nuclear arms that make it pointless to go to war in the first place.

Clearly, even the most idiotic and risky Russian decision maker would not dare checking the resolve of US, France, Germany and others to implement section 5 over the Baltic States. In fact, the very speculation on this topic from the Russian side may only be a manifestation of propaganda in action.

The image of “Putin as a Mad Man” ready to nuke Riga, Vilnius or Warsaw is promoted only for one purpose, to scare Europeans into compromising over Ukraine. Every nearby border drill and military exercise is a sign, a gesture from Putin with a label “Yes, I can”, when in fact “No, he can’t”.

But, as it turns out, people in the Baltics do take the risk of being attacked by Russia seriously,  which only serves to make the Kremlin keep sending the same message. Considering the options at hand, it seems that if tensions grow higher, leaders of the Baltic States would rather compromise than risk being annihilated or re-occupied by Russian troops. Thus, the Kremlin continues the scare game. For people in the Baltics, bordering Russia seems like a Russian roulette, when in fact, there is no bullet in the gun.

Putin is no idiot and he would never risk his well-being for incalculable profit. Indeed, what could Russia possibly gain from attacking or even occupying the Baltics? Nothing really. Outside the propaganda war, where a Russian territory grab seems unmotivated and chaotic, it has its own logic and risk assessment. And an attack on the Baltics is clearly a suicide recipe. Even the most dubious Russian imperialists, such as neo-Eurasianists, do not see the Baltic States as a potential target of annexation, due to the complete cultural otherness and irreversible latinization of the Baltic States.

It seems that the only solid argument for the possibility of Russian intensification in the Baltics is the discrimination of ethnic Russians who according to the “Russkiy Mir” doctrine, Russia has to protect and provide for. Theoretically, it could serve as “casus belli”, but in order for that to happen the governments of the Baltic States would in fact have to severely discriminate against the Russian minorities. It is hardly possible, and even that might not be a reason for Russia to act at all. Right after the collapse of the Soviet Union, thousands of ethnic Russians were killed in the Central Asian states, and Russia didn’t act on it at all.

The Baltic States should not be afraid of Russian invasion or any other sort of direct physical assault for the east. What could happen, and in fact is happening, is a combination of “psychological warfare” with drills, exercises and hacker attacks directed to produce fear and readiness to compromise over values. The other danger is the propaganda that is targeting ethnic Russians who in fact should become the frontline of defense for the European values, freedom and progress.

The Baltic States have the largest ethnic Russian population in the entire EU. That is not yet used to their full potential. Russians living in Estonia, Lithuania and Latvia could be the vital proof that European values are absolutely applicable to the Russian people. Through those Russians, the EU could at least attempt to explain to the Russian public the choice that Ukraine has made. The choice that has nothing to do with US geopolitics, worldwide Russophobia and Russia itself.

Anton Barbashin an analyst at the Center for Polish-Russian Dialogue and Understanding.

We respect concern of international media, but epidemiological COVID-19 situation is under control in Kazakhstan

The British investor admires the professionalism, motivation, and quality of life of Kaunas residents

Kidnappings and assaults in Belarus. Inside Lukashenko’s crackdown on independent voices

Trump and Putin by the Book