Virtual film production is a cost-efficient reality in Latvia 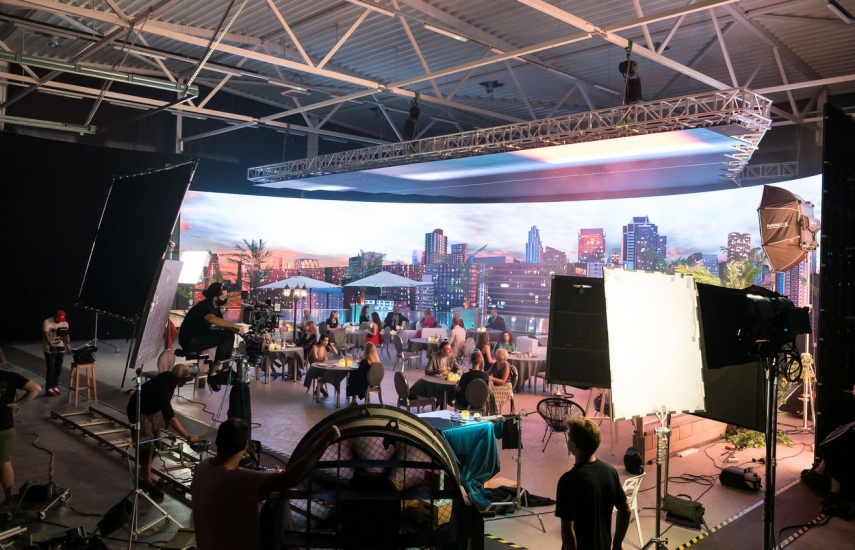 Virtual production studio LED Unit in Riga is at the forefront of a new, technically advanced way to make movies, series and commercials, allowing creative ideas to come alive with the use of a large LED wall – while saving time and money.

Imagine being a film producer and your story revolves around a plane that has crashed in snowy mountains. This was the situation that Forma Pro Films, Riga, found themselves in a couple of
years ago. “The logistics were a nightmare – having to ensure the safety of both crew and equipment, paired with the worry of clouds or darkness coming in before we had finished shooting a scene,” says Max Pavlov, producer at Forma Pro Films.

Further tricky outdoor situations led Pavlov and his technical expert Denis Sorogin to search for a safer, more controllable solution. After learning about Virtual Production, both were so convinced of the technology that Pavlov swiftly opened up his own studio, LED Unit in Riga, thus becoming the CEO, while Sorogin took on the role of the CTO. Operating since 2021, it is already one of the biggest and technically up-to-date virtual production studios in Europe.

In virtual production, a film shot in (mostly) real locations is projected onto LED walls. Adding real props and when actors take stage, all the different elements merge to create a mixed reality.
The technology is based on the game engine Unreal Engine, which has already been used in more than 160 major motion pictures and TV series. Just like in a computer game, a location is
built and then played on LED screens on a curved wall. A tracking system attached to the camera means that the location moves with it. Unlike working with green screens, everyone involved can
see the scene’s setting throughout filming. The actors are fully immersed in the story and those behind the camera can see what the final material will look like – with the benefit of being able
to make changes on the spot. What used to happen in post production, can now be adjusted before or during production, often allowing for significant savings.

Instead of actors and a whole crew needing to travel to a remote location, virtual production allows for a small team to head there and shoot the material for the LED screens, making this a
sustainable choice too. After all, “who wants a large amount of people trampling through an ancient forest, powered on by dirty diesel generators?” said Pavlov. Working in such a studio
environment also offers health benefits, as crews can form Covid-bubbles or avoid potentially high-risk insect bites for example.

Financially, “you can save a lot of money on location hire and by avoiding the costs of moving people and equipment from A to B to C. Also, thanks to our location in Latvia, our prices are
highly competitive,” said Max Pavlov.

Not only filmmakers, but advertisers have discovered that virtual production brings many benefits. “Imagine how many scene and light changes you require when you want to display a product in different situations, all within 60 seconds,” said Denis Sorogin. Car scenes especially are much easier, with fewer road closures, street permits or camera riggings required. The ability to reflect a real-looking sky on the surface and adjust the light just-so, means that you can “show the product, well, in its best light”.

Despite being new to the market, LED Unit has already completed a project with Freeform for Disney, with great success. Working with a LED Wall for the first time, Ben Kasulke, the director of photography on the project, was impressed with the ease of using the technology, pointing out that the crew in Riga was “unbelievable, world class.” Blair Breard, the executive producer, who has also produced shows for HBO, found the Latvia experience so smooth that she hopes to come back soon from the US “with more TV series and feature films…we feel super lucky to have found this ‘secret’.”

Not so secret anymore and operating with highly skilled staff to Netflix technical standards, LED Unit proves that the Baltic region can lead the way in a new era of film and ad production.