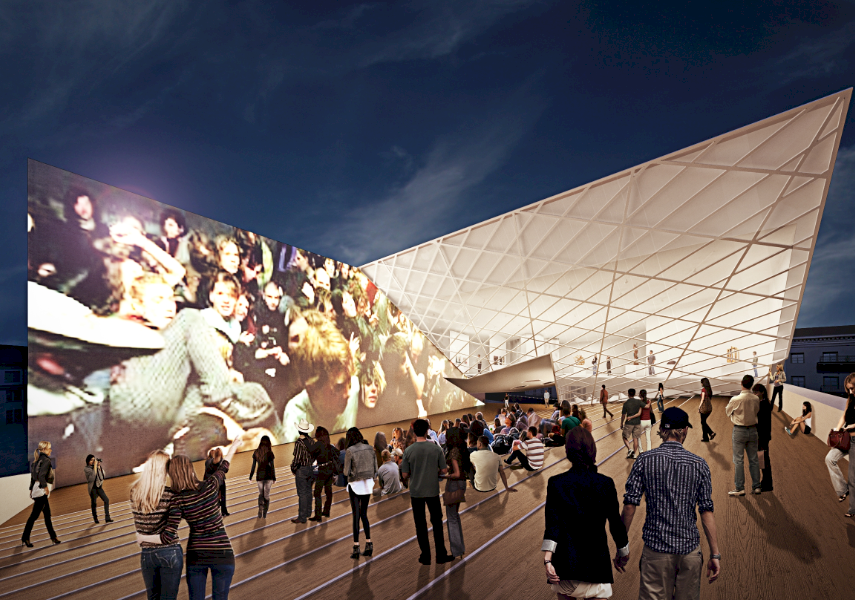 CUTTING EDGE: The plans for Vilnius’ new MAC are bold and brilliant.

VILNIUS - Plans for the new Modern Art Center (MAC) in Vilnius brim with ambition. Occupying a site area of 3,100 square metres, the MAC will undoubtedly transform the cityscape of the Lithuanian capital, to say nothing of how much it will bolster its flourishing contemporary art scene.

It will take time; completion is slated for 2019. But planners have already hired the services of Daniel Liebeskind Studios, the prestigious architecture firm run by Daniel Liebeskind, a world famous Polish-American architect.
The MAC intends to stand as an expression of Vilnius’ past and present, and will be supported locally by Do Architects, a Vilnius-based architecture firm.

Milda Ivanauskiene, acting director of MAC, commented to The Baltic Times that the centre has thus far received a great deal of positive feedback in Lithuania.
“I think it has to do with the fact that the former cinema Lietuva, which was a neglected place, is about to be revived into a new cultural space,” said Ivanauskiene.

“It is a great honor to have such an architect of Daniel Libeskind’s calibre to have designed the building.”
The project, surrounded by a new public piazza and located steps away from one of Northern Europe’s largest surviving medieval cities, has been conceived as a cultural “gateway” which will connect Vilnius’ 18th century grid to the medieval walled part of the city.

The concept has been inspired by the historic gates of the city and references the local architecture both in form and materials.
MAC will be dedicated to the exploration of visual art works by modernist Lithuanian artists and artists residing in Lithuania, created beginning in the so-called “thaw” (approximately from 1960) until the restoration of Lithuanian independence, up to the present day, and will make the collection accessible to the broadest range of social cultural segments of society.

The collection, which contains over 4,000 items, is owned by philanthropists Viktoras Butkus and Danguole Butkiene, who co-founded in 2009 the non-profit Modern Art Center (MAC) Vilnius. The couple will be financing the construction costs of the centre.
The  centre’s collection represents 226 artists including paintings, drawings, prints, sculpture, photography, and video works. The MAC has assembled a significant collection of artworks from the Soviet period, which at the time were ideologically unacceptable and therefore ignored by major Lithuanian art museums following official state policies on art.
Following the restoration of Lithuanian independence in 1990, public funds for acquiring contemporary art have been extremely limited.

The Butkus saw the urgent need to create a collection and today the MAC is regarded as one of the leading institutions collecting contemporary Lithuanian art.
“What is unique about the MAC collection is the number of artworks by certain distinguished artists forming a collection within the collection (for example, Vincas Kisarauskas, Kostas Dereskevicius, Mikalojus Salkauskas, Antanas Sutkus, etc.). Also the fact that it contains artworks by artists of the young generation is also worth mentioning.”
“We wanted to create a museum for the people of Lithuania, and also give this collection a home and an international audience. This collection is about the cultural legacy of the country,” said Butkus, former chairman and chief executive officer of the Lithuanian biotechnology company Fermentas.

“Libeskind’s work is expressive, innovative, and, most importantly, has the power to tell the story of the past while connecting to the future of the city,” added Butkus.
“The Modern Art Center not only creates a home for this extraordinary collection, but the design connects the galleries to the street and the urban fabric — giving the citizens of Vilnius a new cultural  centre infused with public space,” said Libeskind.

Studio Daniel Libeskind was established in Berlin, Germany, in 1989 after winning the competition to construct the Jewish Museum Berlin, one of the largest Jewish Museums in Europe.
In Feb. 2003, Studio Daniel Libeskind relocated its headquarters from Berlin to New York City when Libeskind was selected as the master planner for the redevelopment of the World Trade Center.
“Every effort will be made for the centre to become a visible and visitor friendly space offering high quality exhibitions and rewarding experiences. Though not that large in square metre size, and budgets as compared to national public Lithuanian institutions, the centre will function as a viable cultural place,” said Ivanauskiene.
Construction on the MAC is planned to commence in 2017, with completion slated for early 2019.

Further information on the MAC may be found at www.mmcentras.lt.