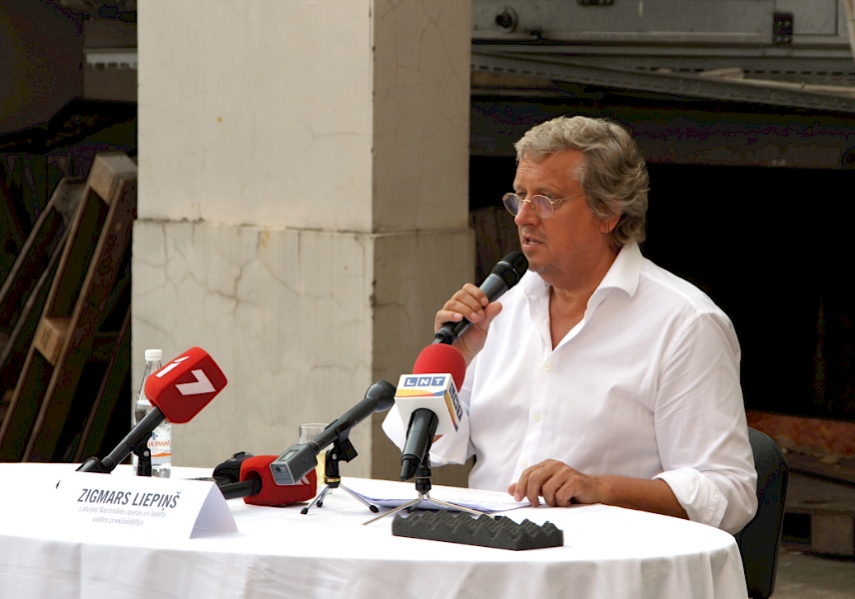 RIGA - According to Latvian law, state-owned companies — including state-owned cultural organisations — have to return a whopping 90 per cent of their annual net profits to the state budget.
This can, however, can be annulled by a decision from The Cabinet of Ministers. The cabinet is able to grant, at its discretion, a privileged status for some companies, who can then keep the entirety of their profits.
The aim is for a few state-run companies to reinvest their money for further development. For the others: they’re left with just a 10 per cent slither.

On August 11, 2015, the government took a decision along these lines that will hammer Latvia’s cultural institutions.
They have not granted that privileged status to four cultural institutions in serious need of keeping hold of their net profits for redevelopment and maintenance projects.
The four include the Latvian National Opera and Ballet, The New Riga Theatre, Latvijas Koncerti and the State Puppet Theatre.

Each institution ‘’will be required to pay back 90% of their net profit to the state budget - a total of approximately 186, 000 Euros,’’ said Dagnija Grinfelde, a Public Relations Adviser to the Latvian Minister for Culture.

The Latvian Minister of Culture, Dace Melbarde, has criticised the government’s decision.
She believes it will send out a signal to all cultural organisations that obtaining a profit will be an exercise in futility - what is the point of generating profits, they may ask, if it would mostly just be returned to the government.
The financial sustainability of these institutions would then come into question.

The Minister, according to Grinfelde, has also pointed out that this is a question not only of money but also of the government’s attitude to the promotion of Latvian culture.
“Only one month ago, the same government allowed some of the biggest Latvian transport and communication companies to keep their part of the net profit of nearly ten million Euros in total,” the spokesperson said.
In the case of the Latvian National Opera and Ballet, this current government decision raises a question of how the dividends from the Latvian National Opera and Ballet’s  profit will solve any problems existing in the Latvian state’s budget.
The profits are small in any case when compared to other means of raising state funds.
Meanwhile, companies such as the Road Traffic Safety Directorate and Riga International Airport, both under the transport ministry, have been granted the privilege of keeping their profits.

The transport ministry may currently be battling to distance themselves from an ongoing investigation by KNAB, Latvia’s anti-corruption bureau, but there was still time to secure hefty profit exemptions for the companies run by the transport ministry.

The winner keeps all approach contrasts starkly with those companies loaded with a 90 per cent pay up, will place a heavy burden onto the four cultural institutions who will have to pay back 90 per cent of profits.
The amounts of the four cultural organisations which will be directly affected by the government’s decision are    – The Latvian National Opera and Ballet (113,840 euros), The New Riga Theatre (24,576 euros), Latvijas Koncerti  (37,737 euros) and State Puppet Theatre (10,369 euros).

Political circus
At the same time, Grinfelde pointed out that there are five other companies who were allowed to keep all of their net profits without the government grabbing a single cent back. These include: the Riga Circus, with its profits of 127,423 euros; the Liepaja Symphony Orchestra, 23,311 euros; The Latvian National Symphony Orchestra, 4,580 euros; the Valmiera Drama Theatre, 2,398 euros; and the Daugavpils Theatre, 27,251 euros.

This raises the question as to why all nine companies don’t benefit from the same conditions. How has the Riga Circus been chosen, and not the National Opera? What could possibly be the criteria?
Following a meeting with Latvia’s President Raimonds Vejonis and Finance Minister Janis Reirs on 13 August, the country’s Prime Minister Laimdota Straujuma stated the Latvian government should revise this recent decision about not waiving dividends from profits from state-owned cultural organizations.

A general air of disappointment hovered above the offices of the cultural institutions affected by this government decision.
It was the Latvian National Opera and Ballet who, according to the Lita Juberte from the Press Office of the Cabinet of Ministers, “was the loudest voice heard in expressing their disappointment with this decision.’’
In an emergency press conference,  Zigmars Liepins, the director of the Latvian National Opera, stated that the  Latvian National Opera and Ballet is seeking an as explanation as to how this decision fits into the context of “one law - one justice for all” from the Cabinet of Ministers.

Zigmars Liepins also pointed out a further issue in relation to the Latvian National Opera and Ballet - in 2013, the organisation had incurred considerable debts, which saw the organisation incur debts of  750,000 euros.
Liepins further noted the Latvian National Opera and Ballet had embarked on efforts to restructure its operations and programming to ensure profits have been reachable.

The restructure would have enabled the organisation to repay its outstanding debts.
Since 2013, the financial situation of the organisation has improved to such an extent, it recently managed to achieve a net profit of 126,489 euros.

It planned to spend 90 percent of the total, (113,840 euros), to carry out building maintenance works.
Should the Latvian cabinet choose to not reverse its decision, the proposed maintenance work will be put on hold.