The stones of Moletai: The Shoah lesson in Lithuania 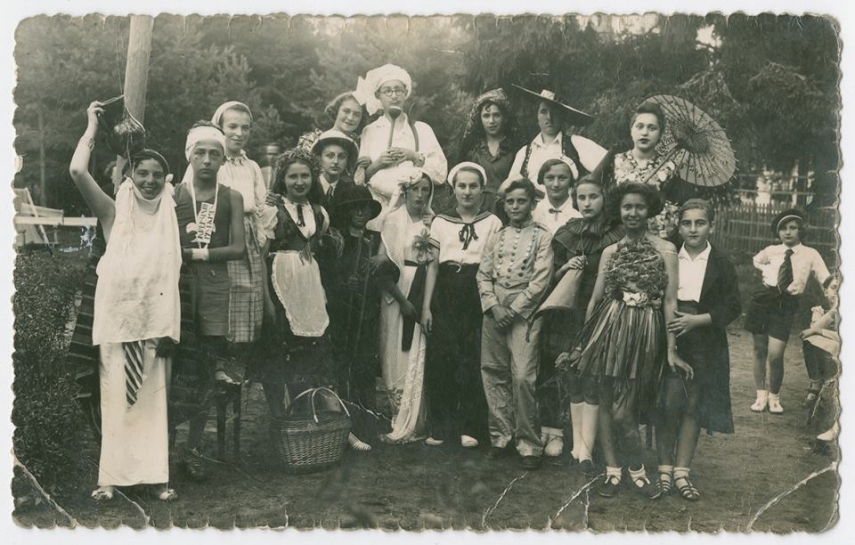 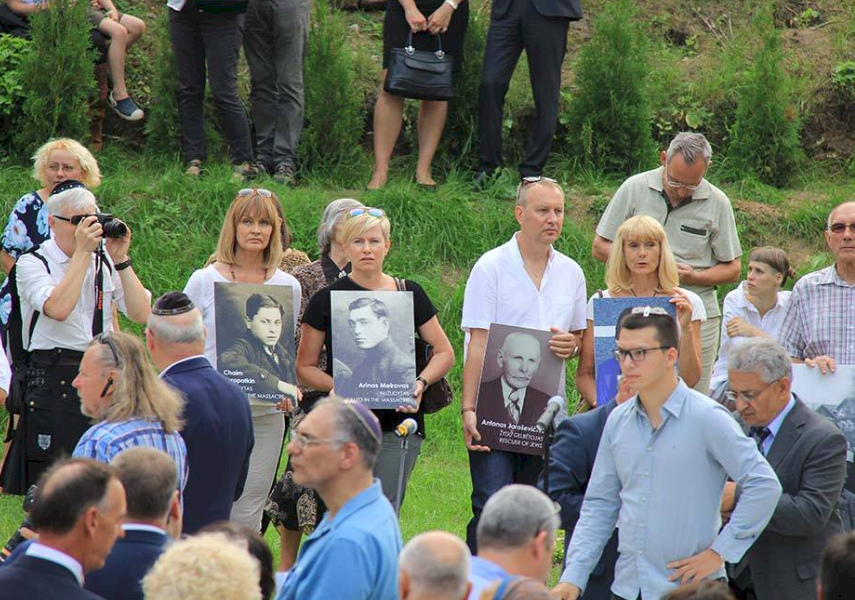 Aug. 29, 2016 has become a truly important day for the Lithuanian people, for Israel, and for all who do not know much about the Holocaust.

Aug. 29, 2016 has become a truly important day for the Lithuanian people, for Israel, and for all of us who do not know the past term for the Holocaust, “Shoah” in Yiddish. On that day, the small Lithuanian town of Moletai became a scene of tangible and penetrating lessons on the Shoah. It was a rare event — unpretending, quiet, and sincere, determined and devoted; the real thing.
Yet a couple of months ago, the people who were organising the March in commemoration of the 75th anniversary of the Moletai massacre were thinking that there would be 200 to 300 people in attendance, mostly guests from Israel, South Africa, and the other countries where the relatives of the victims of Moletai are living today.

“Observe that day in our memory...”

Moletai — which was Malat before all its Jewish residents had been annihilated — is the place, an hour’s drive from Vilnius, where all its Jews were locked up for several days without food and drink in the one of the town’s several synagogues in the end of summer of 1941 before they were marched two kilometres to the specifically prepared pit. The 50-metre by 3-to-4-metre pit, which was 4 metres deep, had been dug by 40 arrested Jewish men the day before. The digging took almost 24 hours. All the people forced to the death march were methodically killed next to the pit by over 20 members of the Lithuanian white-band local police under the supervision of one Nazi officer, one translator, and the head of the Moletai District police. The decision of the massacre was made by the Nazi headquarters in Utena, the district where Moletai was located. The massacre was photographed by the Nazis.

The general figure of victims could be substantially higher: according to the official records of the Lithuanian Jewish Cemeteries register, 3,782 Jews from Malat and Utena together were murdered at the pit. It is also believed that none of the 5,443 Jewish individuals registered as residents of the Utena District as of Jan. 1, 1941 survived.
History does have miraculous threads for us in its arsenal. A couple of letters of the people from the doomed Malat had reached their relatives outside Lithuania later on with help from local Christians. The letters are preserved at Yad-Vashem now. So we could read the rows nervously scribbled in a rush by the victims themselves, just prior to their annihilation:
“For two days now we have not eaten and soon we are going to be murdered ... Everyone is dressed (and ready) with their beloved children and everyone is waiting. We are all (imprisoned) in the study house. Enough time remains so that sometimes we wish death would come already ... Observe this day in our memory: it will be the 19th of August … Tsipora” ( YVA, O.75/158).

The following 75 years, three generations of time, were the years of oblivion. It is telling, indeed, that the commemorative march for the 75th anniversary of the massacre has become the first such event for the victims of this terrible crime.
For several previous years, the efforts of Israel-based relatives of the brutally murdered Moletai Jews to commemorate their memory at the place of their annihilation were fruitless and frustrating. And also shameful, as well-known Lithuanian director Marius Ivaskevicius has shown so well in his exceptionally powerful writings on the issue of facing the truth about the Holocaust in Lithuania by modern Lithuanian society. As I see it, it was Ivaskevicius’ personal stand that has triggered the awakening of the public conscience on the matter — and this is both healthy and timely.

The issue started to be discussed in Lithuania much more intensely than ever before. For several years, a handful of Jewish activists, such as Sergey Kanovich, have been publicly challenging the very concept of the Lithuanian attitude toward the Holocaust and the way of remembrance of the unparalleled tragedy and mega-crime in which 94.6 per cent of the country’s Jewish population had been exterminated in world record proportions. The heart of the matter is that the crime has been committed largely and enthusiastically by the local police, known as white-band Lithuanian police, under the supervision and command of the Nazis. Understandably, it is just impossible for the descendants of the Lithuanian Jewry to accept any kind of glorification of the Lithuanians who were participating in any way in such hideous crimes.
Ruta Vanagaite’s recent book “Ours. The Journey with the Enemy” had also been quite a bitter settling of the account between Lithuanians on the matter of the Holocaust and the active participation of many local people. Neither Ivaskevicius nor Vanagaite are Jewish.

Just one month prior to the March in Moletai, a wide and heated discussion, both in Lithuania and beyond, has erupted on the scandal around the previously privatised 7th Forth in Kaunas, the first concentration camp in Lithuania. This was the place where 5,000 Jews and 3,000 POWs had been murdered about the same time as the massacre in Moletai in the summer of 1941.

At the same time, we shall not — and never will — forget those many heroic Lithuanian people who did save Jews or who were trying to do so, among them many clergy and nuns. In his deep and emotional letter on the eve of the Moletai March, famous theatre director Kama Ginkas, whose entire family are Litvaks, had asked his friend and colleague Marius Ivaskevicius to put stones from him and his ten grandchildren, who were saved by several brave Lithuanians.

The people’s river of memory

What happened in Moletai on Aug. 29, 2016, exceeded the expectations of many people who were familiar with the project. At least 3,000 people in attendance, all by their own will, normal, ordinary people, many young ones, many with children, joined the visiting relatives of the massacred Jews of Malat. There were priests, Franciscan monks, women in the Lithuanian national dresses, high ranking Lithuanian military and soldiers, students, teachers, engineers, in the human river that flooded the streets of the small resort town. In addition to many Israeli flags, there were Polish, Lithuanian, and Latvian flags, too. The President of Lithuania Dalia Gribauskaite attended the ceremony along with Amir Maimon, the Ambassador of Israel in Lithuania and, in a truly thoughtful gesture, the Lithuanian Ambassador to Israel Edwinas Bagdonas was also present. The Lithuanian Minister of Defence was there on behalf of the Lithuanian government, and the Chief of Staff of the Lithuanian Army with a beautiful arrangement of white flowers represented the country’s military force.

In the first row of the March’s column, our good friend, the first president of the post-Soviet Lithuania legendary Vytautas Landsbergis, was marching with his wife in a physically demanding effort. There are rare moments in life when one is deeply proud of one’s friend, and seeing 83-year old Landsbergis and his wife marching in Moletai on Aug. 29, 2016, was the one such fundamentally important moments. Our other dear friend Emanuelis Zingeris was there, and many well-known members of the public as well.

The other people were marching with oversized yellow Stars of David pinned to their clothes. Those were not Jewish people.
A black marble monument had been unveiled by the Ambassador of Israel at the location of that horrific ditch, with so many people queuing quietly and patiently in order to put a stone on the memorial and to light a candle there.

“We are walking this road for them...”

The idea of how the 75th commemoration of the massacre in Moletai had been conducted, the participation of so many different people, the role of the state in the commemoration — all this has created important precedent. It also contributed into what we all, Jews or not, do need essentially: personal connection. We do need it for ourselves, for decency of our life today and tomorrow. During the March, a small girl who got tired along the way, asked her mother: “Why do we have to go so far, mummy?” And her young mother told her, in Russian: “Many years ago, a little girl and her mom, similar to us, were forced to go all the way on this road too. At the end of this road, they were murdered. Today, we are walking the path for them.” And the girl did continue to march bravely despite being quite tired.

Not one of the many young children in that column will forget that experience, not to speak of the very many teenagers and older youth in attendance. And this is the essential part of the March in Moletai.
It has become a memorable, crucially important lesson on the Shoah in real time, by real people, among whom the prevailing majority were non-Jews. The majority of attendants were Lithuanians, but there were people coming from Latvia, Russia, Belarus, Poland, to join the hands with relatives of the victims who did fly in from Israel, South Africa, Mexico, Argentina, Australia, and the USA.

The fact that it has happened 75 years after the massacre, after many years of oblivion, and amidst the complicated context of the attitude towards the Holocaust in Lithuania currently, indicates that it is not “Never Again” which seems to be rather wishful thinking, sadly, but it is “Never Too Late” to learn and to admit. And to put that absolute pain and horror into one’s own heart, Jewish or not, which is the only recipe for decency.

I cannot help but compare the March in Moletai with another recent commemoration of the 75th anniversary of another awful crime of the Shoah, the Kielce pogrom in Poland. Despite many efforts to run a representative event of commemoration by those who care, we saw very few people in attendance, mostly the foreign relatives of the survivors of that absolutely black page of Polish Holocaust history. Present there was just one low ranking official from the administration of the president of Poland who did not say a word at the small, short, extremely sad, and almost non-existent ceremony. On the very same day of that utterly shameful episode, the minister of education of Poland made herself internationally infamous calling a very well-known and documented factual side of that pogrom in Kielce “a matter of opinion” on Polish TV, to the visible shock of the presenter.

For some reason, the acting Polish authorities very persistently neglect the core element in the current perception of the Holocaust and post-Holocaust legacy: that the truth about that terrible, relatively recent past is badly needed for societies in which both the war crimes and moral atrocities were committed.
Back in Lithuania, the March of Living in Moletai has been true to its name, and it is really encouraging. Among the comments on my first reaction to the March, there has been one from a young Lithuanian journalist who is interested in history and its lessons: “This is a historic day. From today one, it is ‘us’ in Lithuania, and not anymore ‘us’ against ‘them.’” I personally find this kind of development precious.

Dr Inna Rogatchi is a writer, scholar, filmmaker, and public figure, co-founder and president of The Rogatchi Foundation — www.rogatchi.org. She is the author of internationally acclaimed The Lessons of Survival film on Simon Wiesenthal — www.rogatchifilms.org/lessons-of-survival — a series of historical analyses on Raoul Wallenberg, and of the forthcoming book on the Post-Holocaust Legacy and its Challenges.