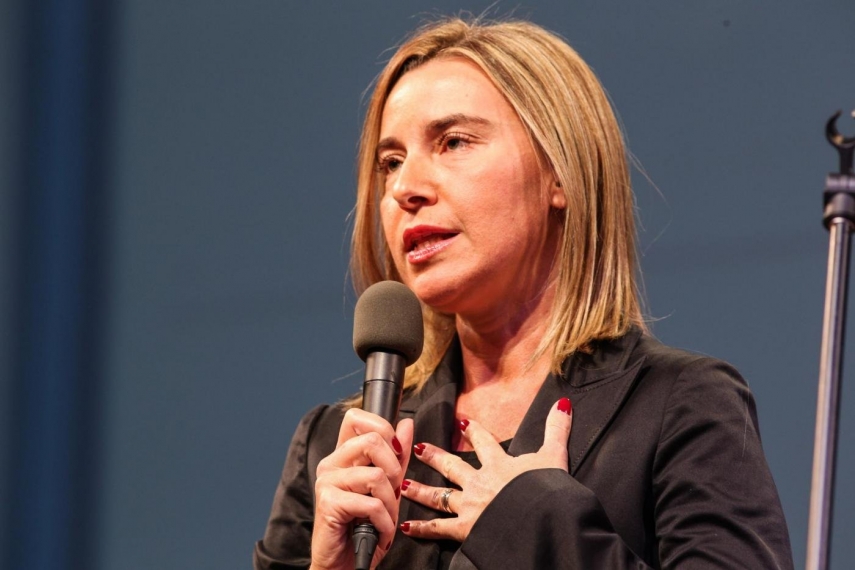 On Monday, the foreign ministers of the European Union discussed relations with Russia, taking as their departure point the “issues paper” prepared by Brussels bureaucracy, with the European External Action Service under High Representative Federica Mogherini taking the lead role. This paper, published last Thursday by the Financial Times, has already created a minor storm because it was interpreted as advocating a return to “business as usual” with Russia.

To be fair, in its wording the paper did not advocate such a return, certainly not an unconditional one. But its spirit or tone did leave an impression that the EU’s principled line and resolve might soon start to crumble. Lots of justified criticism focused on the questions of timing and political choreography: is it right to speak of lifting the sanctions while Russia is stepping up its military offensive in Eastern Ukraine? Should it not be Russia, as a guilty party, to make efforts to normalise the situation, while the EU remains the one setting conditions?

Thankfully, on Monday those questions were answered by the foreign ministers in a reasonably satisfactory manner, so for the time being, these issues can be put aside. However, the paper also included some more fundamental flaws that have so far escaped attention. Since the paper – or the thinking behind it – may guide the EU’s Russia discussions for some time, these failings still deserve a closer look.

The paper’s general guiding vision, although not very clearly articulated, seems to be correct: the EU’s end goal is not to isolate or destroy Russia, but to find a way to make Russia modify its behaviour to correspond to international law and to an OSCE-based international order, and thereby, in the end, to arrive at a new level of co-existence and cooperation that would also include elements that appeal to Russia. This is a good goal – but it is also a very difficult and demanding one. Sadly, it is evident from the paper that its authors have no proper understanding of what it will take to arrive at such an end result.

The most worrying problem with the paper is that it betrays a profound lack of understanding of the driving factors of Russia’s foreign policy and their relative importance.

Compare, for example, the passages that try to identify Russia’s and the EU’s interests with regard to each other. Russia’s interests are seen as largely formal and bureaucratic: they include resumption of formal dialogue with the EU, trilateral talks on a Deep and Comprehensive Free Trade Agreement, and recognition of the Eurasian Union (EEU). The EU’s interests, while listed in the same quick and somewhat offhand manner, belong to a different world: Russia’s respect for international law and OSCE-based order, an end to Moscow’s destabilising activities on the EU’s borders and to Russian pressure in the common neighbourhood, and improvements in fundamental freedoms and human rights in Russia.

These are not compatible categories. It is absurd to expect that Russia will stop putting pressure on its neighbours in the hope of “resuming a formal dialogue with the EU” (a dialogue in which Russia was already becoming less and less interested before the current stand-off). For Russia, pressurising neighbours is almost inevitable, because it stems from its chosen identity: Russia wants to think of itself as a great power, and its definition of great power includes having “a sphere of influence” around its borders. Great power status and the ability to control vast areas also legitimise the oppressive nature of the regime at home. Moreover, it would be wrong to think of great power rhetoric merely as a propaganda tool of the Kremlin. No – the idea of other countries being afraid of Russia enjoys true popularity among large parts of the population, who are happy to sacrifice certain freedoms for the sake of this national status.

Therefore, with this paper, the EU is effectively asking Russia to abandon its basic political personality in exchange for some more talking. It is hard to see how Moscow could consider it anything but insulting – especially given the deeply held Russian view that the West has already cheated it into leaving its Soviet sphere of influence in exchange for membership in organisations that, in Russia’s eyes, amounted in the end to little more than talking shops.

Of the things listed by the EU as Russia’s interests, only two – technology transfers and exemptions for Russia’s state-owned energy company, Gazprom, from the requirements of the EU’s Third Energy Package – could be truly attractive to the Kremlin. But even these two are still not attractive enough to cause Russia to abandon its basic worldview. Quite the contrary – technology and, particularly, exemptions are needed precisely in order to retain and increase Russia’s leverage over its neighbourhood.

Talks between the EU and EEU are proposed these days by many in Europe as a potential basis for a new “grand bargain”. But it remains unclear what the talks would actually achieve. As recently as a year ago, Moscow would probably have been thrilled about such an offer. After all, the Eurasian Union was designed as a means to increase Russia’s economic clout and thereby to make it an equal partner to the EU and other trade blocs in ways that Russia could not be on its own. But things have changed after the events of 2014: Moscow’s “loss” of Ukraine and the other EEU members’ increased reservations. Russia will by no means abandon the EEU project, but, for now, Moscow seems unclear as to how exactly it should proceed and to what it should aspire. So, the EU’s offer may be too little, too late. At the same time – and contrary to the EU’s hopes – this kind of cooperation would not really solve the dilemmas associated with the countries in between.

Of course, even though the paper fails to mention them, Moscow does also have real interests vis-à-vis the EU – and they belong in the same category as those listed in the paper as the EU’s interests. They concern the rules of the game in Europe. Ever since April, Moscow has signalled to the West that it is prepared to talk and that it wants to reach an agreement. But agreement for Moscow means recognition of spheres of influence – on the ground, as well as, and more importantly, as a principle of international life. Understandably, the EU cannot enter a dialogue on these terms.

Thus, the disagreement between the West and Moscow is a fundamental one, and there is no easy solution to it. But trying to circumvent it by focusing on trivialities – a measure that sometimes, indeed, can be useful – in this case runs the risk of being counterproductive, because it may overburden the agenda with irrelevant topics and obscure both sides’ understanding of the situation. Therefore, given that the EU and Russia at the moment have little basis for agreement, the EU should consider doing more to arrive to a common understanding on the nature of the disagreement – among the EU member states as well as between the EU/the West and Russia. This is something that is currently missing; and the resulting misunderstandings could lead to – or may already have led to – very dangerous situations.

The EEAS paper does not promote such clarity – quite the opposite. Worryingly, it seems to be in sync with much of the European discussion that tends to see the events in Ukraine as an exceptional, one-off case. Ukraine is surely of unique importance for Moscow, but the underlying principles of Russia’s behaviour are in fact more universal, and could potentially be applied in a wider range of countries – certainly the whole Eastern Partnership area, but maybe beyond.

Too often the document mentions fundamental principles as if they were just side issues of concrete situations. Consider, for example, the sentence: “The EU’s interests lie mostly in: ensuring Russia’s implementation of the Minsk agreements and its respect for international law and OSCE-based European security order.” It leaves the impression that the Minsk agreements are more important than the OSCE-based order, or that the two are one and the same thing. But they are not.

Despite the renewed fighting, careful examination of President Vladimir Putin’s and the Russian Foreign Ministry’s recent statements suggests that Moscow may be prepared – may, in fact, even want – to hand Donbas back to Ukraine in the not too distant future, thereby de facto complying with the Minsk agreements. But if this happens, it will not be because Russia has learned its lesson and has suddenly accepted the OSCE-based order. It will be because its alternative plans for Eastern Ukraine (the creation of Novorossiya, etc) did not work out. Giving Donbas to Ukraine – with, of course, a list of conditions – may seem to be the best way currently available to Moscow to (re)gain some leverage over Kyiv.

When the right things happen for the wrong reasons, reacting is always complicated – and, in this case, it would be especially complex. After all, the EU’s real concern is neither the fate of Donbas nor the Minsk agreements, important as they may be. Its concern is the fate of the European order and the future face of Russia.

We want to share the continent with a Russia that accepts international rules, respects its neighbours’ freedoms, and seeks influence by means of its own attractiveness rather than by coercion. Achieving this would probably require a major change in Russia’s worldview – and, ultimately, that can only come from inside Russia itself. The best way for Europe to help is to develop a properly thought through long-term strategy to guard what remains of the European order. We should restrict Russia’s freedom of action as necessary and possible, while trying to be clear about the nature of our disagreements. And we should keep articulating the vision of the continent whole and free, even if this can only be realised in the distant future. Whatever happens, we are in for a long haul. The Minsk agreements, even if they are fulfilled, will not be the end of the story, but only the beginning. Future EU policy papers should demonstrate a somewhat more profound awareness of that.

The author is a senior policy fellow at the European Council on Foreign Relations. An original version of the article first appeared on the ECFR website and has been republished with the kind permission of the author.