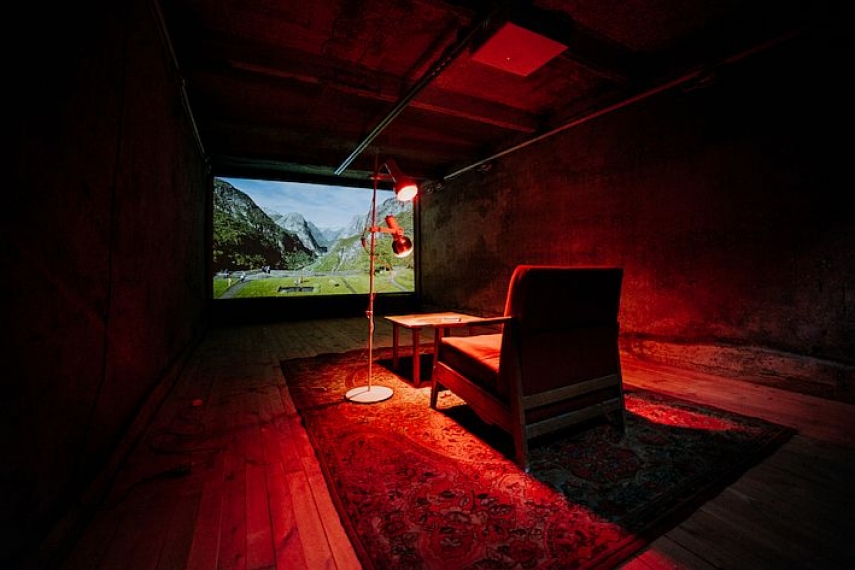 The SIXTH Purvītis Prize exhibition will be on view in the Great Hall of the main building of the Latvian National Museum of Art in Riga (Jaņa Rozentāla laukums 1) from 23 March to 9 June 2019.

* KRISTAPS EPNERS for artwork Forget Me Not at the Residence of Kristaps Morbergs in the framework of the Riga International Biennial of Contemporary Art (02.06.–28.10.2018);

* GINTS GABRĀNS for his augmented reality project SAN as implemented in 2017 and 2018;

* ROMAN KOROVIN for his solo exhibition Satori of Master Wu and Master Lee in the Creative Studio of the ARSENĀLS Exhibition Hall of the Latvian National Museum of Art (23.03.–13.05.2018);

* RASA ŠMITE and RAITIS ŠMITS for exhibition Fluctuations of Microworlds at the RIXC Centre for New Media Culture (09.09.–28.10.2017);

“Over the course of 2017 and 2018, the experts have viewed more than 130 exhibitions. 83 of them were discussed at the regular quarterly nomination meetings. Out of these 83 exhibitions, 20 art events over the two-year period were nominated for the chance to make it into the short-list of the 2019 edition of the Purvītis Prize,” Astrīda Rogule, head of the expert working group, explains.

“It was not an easy process to take the quarterly decision on nominees and decide on the final eight nominees for the Purvītis Prize. We always had lengthy and heated discussions, but it is important to note that the experts all shared a professional attitude towards their duties, the desire to hear others out, analyse, present arguments and accept the majority choice by a vote.”

The winner of the Purvītis Prize 2019 will be announced on 12 April at a special ceremony at Art Centre Zuzeum. An exhibition featuring the works of the eight nominees will be open to the public at the Great Hall of the Latvian National Museum of Art (LNMA) both before and after the winner is announced – from 23 March until 9 June 2019. In the period between the opening of the exhibition and the announcing of the winner, visitors will be able to vote for their favourite, which, just as the winner, will also be revealed at the Purvītis Prize 2019 ceremony.

SATELLITE EXHIBITION OF THE PURVĪTIS PRIZE 2019

With the aim of introducing the members of the jury of the Purvītis Prize 2019, art portal Arterritory.com and culture project agency INDIE in collaboration with the Latvian National Museum of Art are offering a special exposition from 10 April until 12 May – a part of collector Galila Barzilaï-Hollander’s (Belgium) collection of chairs created by artists will be viewable in the 3rd floor lobby of the LNMA. This is one of the 20 different thematic and conceptual branches of her collection. The ideological basis of the exhibition is the chair as an object with a ceremonial, but also multifaceted character, thus this seemingly simple and mundane object has often found its way into the imagination of artists.

“There is something very fundamental about the chair, it embodies togetherness. As soon as you walk into a room, it is an invitation: take a seat! It makes you feel welcome. The chair is closely linked with communication,” Galila Barzilaï-Hollander says. “All of the chairs in my collection are masterpieces, each is unique, with its own personal story.”

The award is named after the Old Master of Latvian painting Vilhelms Purvītis (1872–1945). He was an outstanding artist and art professor who won critical acclaim both at home and internationally. The co-founder of the national school of art and the pioneer of the national landscape painting, Vilhelms Purvītis is one of the all-time most influential figures in Latvian cultural and art life. He was the Head of the Riga Art School, the Director of the Riga Museum of Art and the founder of the collection of Latvian art, the founder and the first Rector of the Art Academy of Latvia and for many years, the Head of the landscape masterclass at the Academy, the Commissioner General of all the representative Latvian art exhibitions abroad during the interwar period.

The authority, educational work and artistic style of this prominent landscapist and Fellow of the St. Petersburg Academy of Art has left an impact on several generations of Latvian artists. A wise and farsighted culture politician, Vilhelms Purvītis was an active supporter of the young artists of the time and discovered a number of talented painters who later played important roles on the Latvian art scene. The name of Vilhelms Purvītis has become a sign of national identity, both in the history of Latvian art and in the eyes of the general public. Therefore the Prize is a kind of synthesis of established, classical values and the seemingly momentary, contemporary art processes.

The Purvītis Prize is awarded biannually to an artist or a group of artists representing Latvia with outstanding work, which is deemed to be deeply connected to the developments of the era and forming a bridge between contemporary life, spiritual ideals and intrinsic values. The artist rated highest by a panel of experts and a specially established international jury is selected as the winner. The Prize is 28 500 EUR (including taxes).