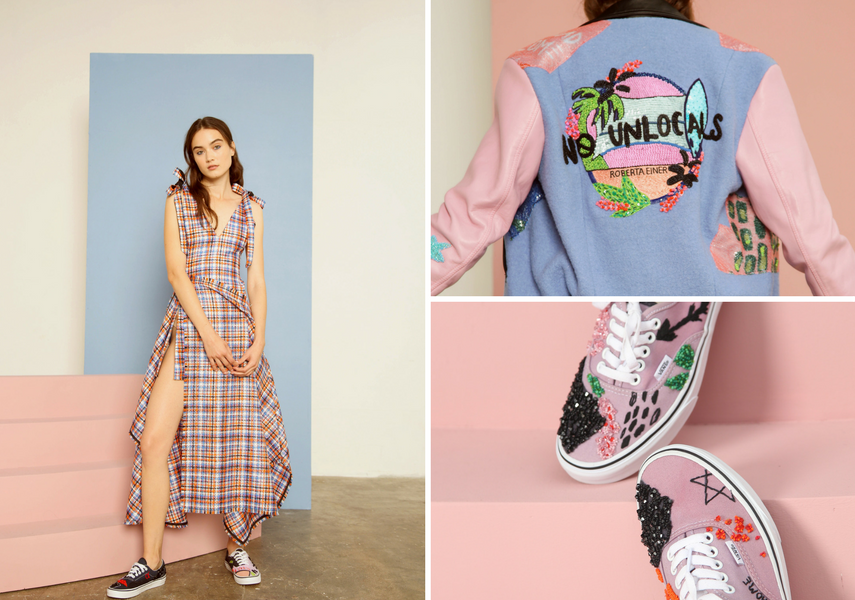 The diversity of the LFW schedule was a testament to the inclusive and innovative British fashion industry on display in London, where the creative potential of two leading London-based Baltic designers was again witnessed. The Estonian Roberta Einer, and the Latvian Fyodor Podgorny (from the brand Fyodor Golan) both showcased their spring/summer 2018 collections.

The trend towards “see now, buy now” which has been steadily growing in popularity, saw a continuation, said Maurice Mullen, Head of Fashion and Luxury at The London Evening Standard and ES Magazine. Mullen an eminent member of the British Fashion Council, has pretty much seen it all in the fashion and publishing media industry.

‘‘The enthusiasm for showing men’s and women’s wear within the same show will also continue. There also seems to be a trend in favour of [fashion] presentations rather than expensive runway shows. I’m a fan of these as the time slots are more flexible, and one is able to view the designer’s work more closely,‘‘ Mullen told The Baltic Times.

Einer and Podgorny, who are both supported by the British Fashion Council, have become embedded in the British fashion industry, and from London, both are steadily conquering the racks of international stores. ‘’I am very familiar with the work of Fyodor Golan and I love their use of vibrant colours and iconic brands (the Coca Cola collection for A/W 16 was a triumph!).

This season, the Baltic-born designer’s focus was self-awareness, self-improvement and sportswear aesthetics. Addressing today's human condition and emotions, and dressing for pleasure, expressing joy and expressing beauty. Fyodor Golan's Spring Summer explored the idea of a dystopian future, where flora and fauna has long gone and life unfolds under a blazing sun.

"Roberta is only in her third season, but definitely a name to watch,‘‘ Mullen said. Einer's luxury womenswear focuses on textiles and working with traditional couture techniques. Playful embellishments and hand-embroidery decorate specifically sourced fabrics to create her daring more-is-more, feminine aesthetic.

The ascendency of Baltic designers has been due to a significant rise in the awareness and appreciation of local design within the past five –six years, as Piret Puppart told The Baltic Times. Puppart, Head of the Department of Design and Crafts, Design and Applied Art, and Fashion Design at the Estonian Academy of Arts, has witnessed, through her professional involvement in the fashion industry which has spanned two decades, the rise of Estonian designers, such as Robert Einer, Triinu Pungits, and Kristel Kuslapuu.

The fashion industry is also paying close attention to the London based Latvian fashion designer Linard August, who under the Linard August label, has been creating a buzz with meticulously crafted Savile Row quality suits and clothing items. ‘‘Being at the centre of the world’s fashion industry has created numerous opportunities for growing my brand. And though based in London, it still allows me to return to Latvia to work with clients,‘‘ August stated. Of August’s work, Mullen stated that ‘‘Linard August brings a sculptural - almost architectural - influence to his designs and I’ve no doubt he’s destined for a great career. As regards securing a show slot on the main LFW schedule, there’s clearly a lot of competition, and spaces and times are limited, but the old saying ‘the cream rises to the top’ applies so if the work is worthy of a prime position, it will be given one.‘‘

As for Estonian designer Triinu Pungits, though she is currently garnering international allocades and receiving international praise for her design work, she has been designing textiles and fashion for the past 13 years, and teaches at the Tartu Art College in Estonia. Pungits has taken part in numerous fashion shows and exhibitions, and has been featured in Vogue Italia, British Vogue, Glamour, among others. Her new collection featured at the Fashion Scout "Ones To Watch" show, in the framework of London Fashion Week, introduced four of the most prominent designers from around the world.

With patterns of geometric clumsiness, repeating angular lines, symbols and stylized faces and hands, Pungits stated that ‘‘My creation is courageous, peculiar and personal, and its consumer is internally a strong, dignified and passionate woman. The design of the fabrics, the cheerful colours and the original design of the clothes hold an important place.‘‘

For Pungits to be able to introduce and show her designs precisely in London "is something outrageous and exactly that something which my young brand and designer’s soul has been craving, and hoping of course to get a necessary push for further steps for brand development."

Puppart notes that previous to the current situation, ‘‘that it was hard to say if a newcomer would stay or not. Now I feel the stability and support of the local market that in my opinion has made the local survival of designers possible and here is where it all starts. This enables to look abroad as well if the support is there locally,‘‘ Puppart said.

Puppart believes this has been due to two major reasons: local support and being very open to change, learning and adaptation into the international fashion scene. ‘‘What makes Estonia unique for the big market is the Pandora's box of heritage we have here. This semi post -Soviet, but at the same time tradition-wise historically rich area provides unique inspirational material that is not so easy to find for someone from outside,‘‘ Puppart said.

‘‘When my students go to interviews in London for example, they are always praised for integrating heritage related research. This does not mean things don't turn out modern. On the contrary - this part of Scandinavian influence is also deeply rooted inside us due to geographical closeness‘‘.

But it was California, Raymond Pettibon, Jean-Michel Basquiat, skate sketches, surf slogans and the golden era of graphics: a melting pot of Golden State seventies and eighties surf-skate culture that came together for the bold and colourful Roberta Einer spring/summer 2018 collection in London.

Einer, the maximalist luxury ready-to-wear designer found influence in the era’s heroes: photographers Joseph Szabo, Hugh Holland and Jay Adams; when summer would swing round and pools were drained so that the cool crowd could show off their latest skate skills; when youth ruled, the backyard was where it was at and when being cool was all that counted.

‘‘It was during a trip to the Museum of Modern Art in New York and the Estonian National Museum that the seed was sown for me for my collection,‘‘ Einer said.

Pettibon’s Southern California-inspired posters and album artwork were on display at both. It was his combination of words and waves for naive and brilliantly child-like illustrations riffing on the punk-rock scene of the time that subsequently struck a chord with the designer. And, so, comes a collection that takes Einer’s signatures, such as the bomber and a shimmering bright palette, and translates it into all things beach-bound: palm and sea-life motifs; poolside patches and stencilled slogans; wide-leg palazzo trousers and flowing off-cut dresses with waves crashing around them, and even a zip construction that follows the same wavy wild contour.

‘‘Little sassy skirts are draped to glamorous yet soft effect, jackets take on a jumpsuit sensibility with swags on the hip or on the arm; while crop tops are in crochet or mesh bugle beads. Brushstroke designs make for a nod to the raw nature of Pettibon’s and Basquiat’s work, notes of graffiti too, while a series of oversized T-shirts take this LA style into easy-to-wear territory,‘‘ Einer said. A new take on print, this is the second season that Einer has used sequins, this time embroidering over them.

“Texture is always key, exquisitely built up in layers of chiffon, Swarovski crystal and leather applique,” Einer said. The designer once again teams up with Swarovski to show off her textile ingenuity. Einer also teams up with Vans on shoes, the perfect poolside shoe for California dreaming.

Einer sees herself as the fictional Alice in Wonderland character and tries to convince herself daily that she is creating a world on her own where everything is (semi) nonsense. Her rise in the fashion industry, a buzz Einer has been building even prior to launching her own label, has been in part due to her ability to learn to understand that any criticism and change is good, ‘‘because it’s there to make you better and push you further.‘‘ She always asks herself “OK, what now? What else can I do to be an even better version of myself, to become a better designer?” It is something that she hopes she will always keep asking herself.

Prior to establishing her own fashion label, the 24-year-old Einer previously worked with some of the world’s iconic fashion brands, Balmain, Alexander McQueen, and Mary Katrantzou. Experiences that the designer has stated were life-changing, turning her minimal aesthetics upside down and learning that “design could be about fun and about making something that makes you happy and that people want to wear.”

Roberta Einer’s rising star has been in part, from only after 12 months of having launched her eponymous Roberta Einer label, bypassing the usual rigid British Fashion Council's rule which normally requires designers to be in active business for three years before consideration is given to make the official London Fashion Week list.