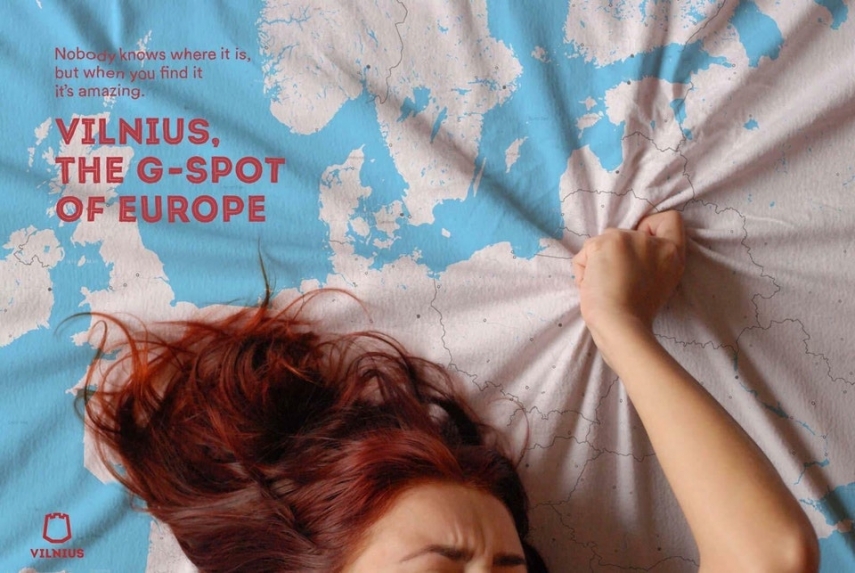 Vilnius, the capital of Lithuania, has stirred worldwide ripples that a capital city could most envy.  The launch of Vilnius’ new advertising campaign under the eye-catching yet controversial slogan “Vilnius – G-Spot of Europe” had people talking from Melbourne in Australia to London in the UK about Vilnius’ new introduction to the world. The advertisement shows a woman lying on a bed clutching a sheet printed with a map of Europe. The ad reads: “Nobody knows where it is, but when you find it – it’s amazing”.

The raunchy to some tag-line alongside the photo has already appeared on London and Berlin billboards and is aimed at the millennials.

A series of short video clips, featuring the hash-tag vilniusgspot, showing ecstatic tourists looking at Vilnius cathedrals and modern architectural sites, has already been viewed by thousands and thousands since being uploaded.

However, as the release comes just ahead of the papal visit in late September, razzed-up traditionalists have bristled against the vociferous campaign, claiming that the branding conjures up an image of Lithuania as a sex tourism country. Catholic Church leaders have slammed the ad saying it suggests “wrong ideas”.

The heads of Go Vilnius, the official development agency of the City of Vilnius, that spear-headed the campaign, have been under heavy fire ever since with conservative politicians demanding the resignation of CEO Inga Romanovskiene.

However, Romanovskiene stood her ground firmly, insisting she will not step down and underscored that “everyone is entitled to their own opinion.“

“We are glad to see that this campaign has opened up dialogue among Vilnians“ she noted. “Internal debate surrounding this campaign has been more heated within Lithuania than abroad, which is natural when it comes to promoting a city or a country” she told The Baltic Times.

Yet the word on Vilnius as Europe’s G-Spot is now out there and the world has gotten the message with The New York Times, The Guardian, The Independent as well as French, German and Finnish media outlets reporting on the Vilnius campaign and, more importantly, recommending all to visit Vilnius.

The Daily Mail article “Vilnius, the G-spot of Europe: Tourism bosses in Lithuania come under fire for sexualised campaign promoting the capital city which claims that ‘’when you find it, it’s amazing“ accentuated the fact that the chiefs in Lithuania’s capital have come under fire for a sexualised advertising campaign to promote the city as the Pope prepares to visit in September.

“The campaign has been criticised by the Catholic Church and comes as Pope Francis prepares to visit the country next month. Lithuanian priests expressed concerns that the ad used female sexuality for advertising and gave ‘wrong ideas’ about Vilnius, a city with a population of 540,000. The government had earlier originally asked Vilnius officials to postpone the ad’s launch until after the papal visit“ says the article.

Australia‘s The New Daily wrote in the opening lines of an article on 11 August: “The rarely talked about capital city of Vilnius, Lithuania, has found a way to compete with the European tourism capitals of Paris and London with a “clever” ad campaign naming it the ‘G-spot of Europe’.

The website also quoted Deakin University marketing and management lecturer Dr. Michael Callaghan, who spoke in favour of the idea.

“Simply using semi-naked bodies or sexual suggestions is the lowest common denominator, but once you become creative on top of that, like in this case, that does demonstrate a slightly evolved approach to using sex to sell“ Dr. Callaghan said. He added: “It may be the oldest marketing trick in the book, but it’s still an effective marketing tool because it works.”

Dr. Callaghan also said the campaign was “quite clever” because it used visual clues to fill in the story, effectively avoiding laws restricting explicit advertising content.

“From an Australian advertising perspective, they [the advertisers] would get away with this as the truth is, it’s our dirty minds connecting the dots of the imagery”.

“It says more about the people looking at the message or the photo than the advertisers, and it’s an easy way to skirt [advertising] laws in numerous countries.”

John Oliver, a popular American TV host, also mentioned Vilnius as Europe‘s G-Spot on his TV show. Afterwards, the internet searches on Vilnius in the United States have soared.

www.vilniusgspot.com, the official website of the new Vilnius advertising campaign, “Vilnius:  G-spot of Europe“ boasted more than 48 thousand visitors over the first couple of days.

However, the Lithuanian Catholic Church, which still holds a strong grip on the legislature and on public opinion in the predominantly Catholic country, has denounced the campaign, calling it “sexist“.

Approached by The Baltic Times for comment, Zivile Seporaityte, a spokeswoman for the Archdiocese of Vilnius, referred to a written statement by its Archbishop Gintaras Grusas.

“The approaching visit of Pope Benedict is not essential in the context of the advertising campaign. The most important thing is what we truly think of ourselves; and do we really want to advertise ourselves in this way, which possibly enhances the image of Vilnius as being a sex-tourism city and which uses female sexuality for advertising’’ the statement reads.

“It is galling that the advertisement creators and those who commissioned it do not think about those who will be hurt by it, i.e., the victims of human trafficking, the women who have been affected by it not only in Lithuania but also in Great Britain, Germany and elsewhere, where the advertisement will be shown“ it reads further.

“This campaign exploits female sexuality and sells Vilnius in the cheapest way and the question why part of Vilnius dwellers would like to identify with such an image of the city remains unanswered. It is important to invite tourists, however, more important is to answer for ourselves who we are, what our values are, what our background is and why we are so unique and important in the world“. Archbishop Gintaras Grusas was quoted in his written statement.

However, Romanovskiene, of Go Vilnius, having described the Papal visit as “a very important event” emphasised that debate surrounding this campaign has been more heated within Lithuania than abroad.

‘’The campaign went viral all over the world - from Europe to India and South Africa, Australia and New Zealand. The response to the campaign abroad has been mostly positive, with audiences praising the campaign as “bold” and as one that stands out from other campaigns in the field. Most important for us, it really got noticed, which was our primary goal“ she told The Baltic Times.

‘’Go Vilnius is the tourism and business development agency for the City of Vilnius. We are glad that this campaign has the full support of the City of Vilnius leadership. We engage in discussions with numerous institutions, organizations and with representatives of the public who care about the city. One cannot expect that opinions will always be 100 per cent the same. We do not consider the discussions that have taken place in a negative light’’ the CEO said.

According to Romanovskiene the idea for the Vilnius: G-spot of Europe campaign was originally developed by Lithuanian students Jurgis Ramanauskas, Skaistė Kaurynaitė and Ugnius Mikšta under the supervision of their mentor, award-winning creative director Antonio Bechtle, as part of their creative advertising coursework at the Atomic Garden School of Advertising in Vilnius.

‘’To our knowledge, it is an original creative idea“ Romanovskiene noted.

According to her, the campaign targets Millennials based outside of Lithuania - in London and Berlin.

“We want to position the city as an alternative European city-break destination to Millennials with disposable income and an interest in lesser-known destinations and experiences. The campaign was designed by Millennials to appeal to the Millennial market. Both the campaign and the Pope’s visit are good opportunities to increase the visibility of Vilnius internationally; however they are completely separate activities aimed at separate audiences“ the Go Vilnius chief suggested.

She was backed by her employer, Povilas Poderskis, Administrative Director of the Vilnius Municipality, who insisted that the planned advertising campaign abroad, introducing the Lithuanian capital as “the G-Spot of Europe”, is the best for the international market. His comments came in response to the government request to postpone the launch of this advertising campaign until after Pope Francis’ visit to Lithuania concludes in September.

‘’We are definitely not going to postpone this campaign which, I believe, is the best advertisement of Vilnius for the international market and exceeds all other products produced by national agencies“ Poderskis told journalists.

The advertising campaign has not left many Lithuanian politicians unmoved either.

While some of the ruling Conservative-leaning Lithuanian Farmers and Greens Union members in Parliament have disapproved of it, the potential presidential candidate of the party, Saulius Skvernelis, who also serves as Prime Minister, was of the opinion that it does not breach the norms of morality, yet the timing of its launch could have been better considered.

‘’I think it’s a strange advertising choice but, I believe, it does not cross the line in a democratic country, of our legal regulations and, I think, also of morality norms. As to the timing, we are speaking about a very important visit for us to Lithuania …I have in mind the Pope’s visit. So perhaps these steps should been co-ordinated but that’s the decision of Vilnius“ Skvernelis said.

According to Go Vilnius, the controversial ban will be displayed for a week.

‘’The campaign’s main idea is that few people know where Vilnius really is but when they come here, everyone is very satisfied and falls in love with Vilnius. The idea was born from conversations with foreigners. When you formulated an idea that there’s a place which nobody knows but when they find it, everyone is very happy, the G-spot naturally popped up“ said Jurgis Ramanauskas, one of the people behind the idea.

The geographic center of Europe is located a mere 20 kilometres from Vilnius, according to the National Geographic Institute of France, which in 1989 concluded that the center of Europe was the village of Purnuskes, just north of Vilnius, Lithuania. The announcement led to much excitement in Lithuania, which at the time was in the process of declaring its independence from Soviet rule.