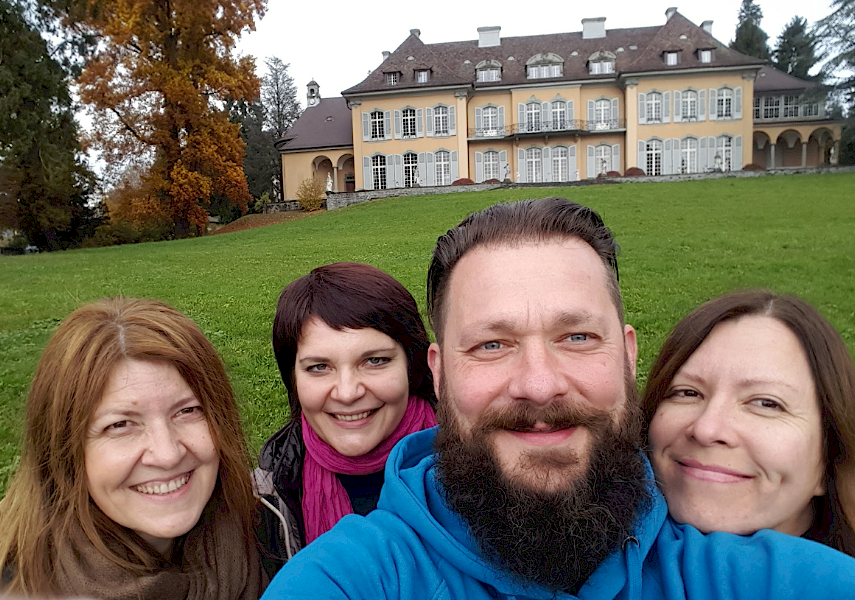 On Nov. 6 in Affoltern am Albis, a lush Swiss town in the canton of Zurich, several dozen Swiss residents gathered for a screening of the Lithuanian documentary Ethnic Kitchen (Pasaulio virtuve). The film told life stories of immigrant women who came to Lithuania after the restoration of independence in the 1990s to an audience of immigrants who moved from Lithuania to Switzerland at approximately the same time. The screening was followed by a lively discussion of the immigrant lives portrayed in the film with the director of the documentary Aiste Ptakauske. The event took place in the spacious home of Ausra Baublyte-Domeisen, a member of the Swiss-Lithuanian Culture Forum, which organises events like this all over Switzerland on a regular basis. The Baltic Times has looked into challenges and motives behind the spirited efforts of the Swiss-Lithuanian Culture Forum to plant seeds of Lithuanian culture in the Swiss soil.

Friendships are being forged

The Swiss-Lithuanian Culture Forum is an official Swiss association, which has been promoting Lithuanian culture in Switzerland since 2014. The idea to start such an organisation first appeared in a book club that was regularly held in the city of Basel for all Lithuanian Swiss who wanted to stay in touch with the literary scene of their homeland. “We would gather twice a month to discuss Lithuanian books,” reminisces the initiator of the Basel Book Club Virginija Siderkeviciute.
“Gradually, we decided that it would really be fascinating to invite authors of these books to Basel because it is always more interesting to discuss a book with its author in the room when you have a chance to ask that person questions and get a deeper understanding of his or her artistic vision. But inviting an author to another country costs money. As an organiser, you take responsibility for covering that person’s travel expenses. If the event does not attract many people, you’re at the risk of having to cover these expenses from your personal funds. This is why we decided to reorganise the Basel Book Club into the Swiss-Lithuanian Culture Forum. Every member of the Forum pays an annual membership fee of 50 CHF, which is standard for all associations in Switzerland. Once we gather the membership fees, we have a budget that allows us to bring to Switzerland at least two Lithuanian authors per year.”

The Swiss-Lithuanian Culture Forum has approximately 20 members of different professions: physicians, IT specialists, graphic designers, bank employees, and others. All these different people are united by one interest: keeping the continuous connection with Lithuanian culture. Virginija Siderkeviciute herself is a professional translator from German into Lithuanian. “In my day job, I translate many technical texts about law, medicine, and technologies,” Siderkeviciute says, explaining her reasons for initiating the Swiss-Lithuanian Culture Forum. “But as a philologist, I miss literature all the time. I make up for this deficiency by engaging in the activities of the Swiss-Lithuanian Culture Forum. Thus, this Forum means a lot to me personally.”
This is probably one of the reasons why so many Lithuanian writers who come to meet with members and guests of the Swiss-Lithuanian Culture Forum stay at Siderkeviciute’s place. “I don’t think of it as a big burden,” says the hostess, “I think of it as an opportunity to get to know these writers better. All artists and creators are incredibly interesting. During the event, you don’t get a chance to talk to them much. But when they stay with me, they tell me so many fascinating stories; they talk to me very openly. So I think I get much more than I give.”

It turns out that Lithuanian writers were in the habit of frequenting Switzerland as recently as the 19th century. For example, Maironis, one of the most famous Lithuanian poets of all time, whose poems are considered the epitome of Lithuanian patriotism, visited Switzerland at least three times. He lived in a villa on the Lake of the Four Cantons, currently known as Lake Lucerne, where one can now find a memorial plaque with the poet’s name. Salomeja Neris, the most popular Lithuanian poetess of the 20th century, first travelled to Switzerland at the age of 23 to meet with her Swiss lover. Jonas Biliunas, another Lithuanian canonical writer of the 19th and 20th centuries, came to study at the University of Zurich in 1904. The house where the writer lived still stands right in the middle of Old Town Zurich. According to a member of the Swiss-Lithuanian Culture Forum, Ilona Katkiene, the doorknob of the front door of the house has not been replaced since the time when Biliunas touched it every time he entered the house. Katkiene takes all contemporary Lithuanian writers who come to Switzerland by the invitation of the Forum to that door. She likes to joke that the doorknob has magical powers: all Lithuanian writers who touch it write a new book as soon as they return home.

A deep rupture in cultural exchange

Unfortunately, 50 years behind the Iron Curtain has created a deep rupture in the Swiss-Lithuanian cultural exchange. Siderkeviciute knows first-hand how challenging it is to reintroduce Lithuanian writers to Swiss society. She explains: “Lithuania has become somewhat forgotten by Europe. In the eyes of Europe, we are merely one of many post-Soviet countries. When I go to the Basel Literature House that is responsible for literary events in the city, I am simply a representative of a small association that promotes the culture of a small country that the staff of the Basel Literature House knows nothing about. They suggested that I become a member of the East European Forum at Basel University if I want the Basel Literature House to consider inviting Lithuanian authors to their events. So I have.
I’ve been a member of the East European Forum for almost three years now. I am convinced that, sooner or later, I will succeed in bringing Lithuanian authors to Switzerland not only through the Swiss-Lithuanian Culture Forum, but also through the Literature Houses in Basel and other major cities in Switzerland so that as many Swiss people as possible can get a chance to discover Lithuanian literature. At the moment, however, all members of the Forum do their best on the individual level. We are like little ambassadors of Lithuania.
Upon attending a meeting with a Lithuanian author, we go to work and tell our colleagues whom we have met, what kind of books this person writes. When we organise bilingual events, we invite our neighbours and friends to them. This is how we spread the word about Lithuanian culture in Switzerland.”

The strategy of the little ambassadors of Lithuania in Switzerland is clearly working. The screening of the Lithuanian documentary Ethnic Kitchen in Zurich was initiated not by a member of the Swiss-Lithuanian Culture Forum, but by a Swiss man named Reto. He once contacted the director of the film asking her where he could purchase a DVD of the documentary. He, however, insisted that the DVD should be handed to him by the director personally. The director, at first, was a little puzzled by such a request, but she soon received Reto’s email with an explanation: “I want my love Ausra to meet you. She is Lithuanian and she likes you very much.”
It turned out that Reto was planning his first trip to Lithuania where he was supposed to meet his girlfriend Ausra’s family for the very first time. He desperately wanted to organise a surprise that would reveal how much Ausra meant to him. So he set his mind on introducing the love of his life to a filmmaker whose work she admired. The filmmaker could not say “no” to serving love: she met with Reto and Ausra, who also happened to be a member of the Swiss-Lithuanian Culture Forum. This encounter resulted in a successful event in Zurich a few months later.

People’s discovery of art and literature

“The biggest reward of all our efforts is the reaction and gratitude of people who come to our events,” joyously claims Siderkeviciute. “Many times, after an event, I have had people approaching me and saying: ‘Thank you for organising this! If I hadn’t come to your event, I wouldn’t have read this book’. Or: ‘I wouldn’t have discovered this author.’
On the one hand, we gather at our events to discuss literature and art. But on the other hand, we discuss so much more. Art and literature is a form of communication. And seeing the hearty joy that this form of communication gives to people makes up for all the hard work we put into our events.”