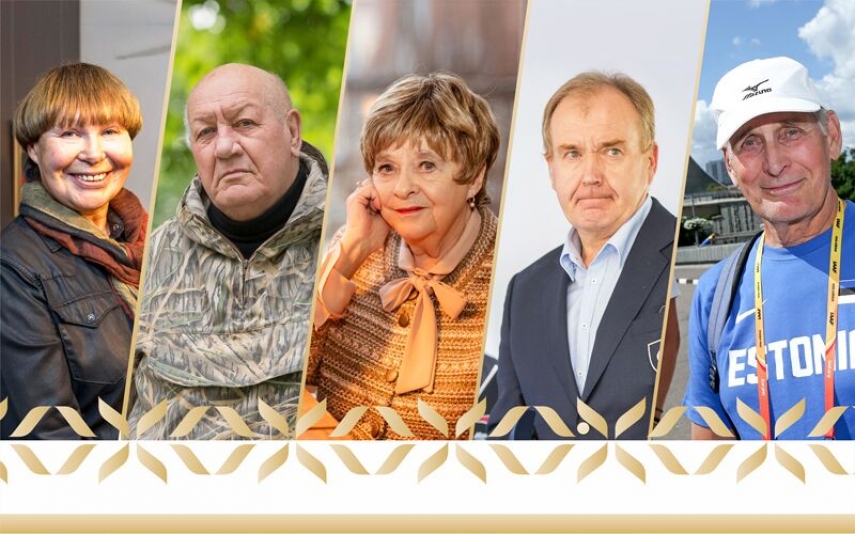 ESTONIA - At its meeting held today, 7 February, the government approved the recommendations by the Cultural Awards Committee for the State Cultural Prizes. This year, the prizes for long-term outstanding creative activity will be awarded to writers Leelo Tungal and Viivi Luik, and to naturalist and thinker Fred Jüssi.  The government also decided today to approve the nominations by the Estonian Sport Council and present the State Sport Award to Toomas Merila and Toomas Tõnise.

The Tänapäev publishing house noted in its submission that Leelo Tungal has for almost 50 years been held as one of Estonia’s most significant and best-loved children’s authors, poets, and lyricists. Her works have been joyfully read by several generations, and arrangements of her poems have been performed at many song festivals. Tungal has published almost 90 collections of prose and verse for children and young people, and is still actively writing in several genres. “Her work is characterised by optimism and boldness, direct communication with the reader, clear wording and wittiness,” the submission added.

In its proposal, the Estonian Writers’ Union notes that Viivi Luik is one of Estonia’s most important and outstanding writers. “In addition to the lasting value of her prose and poetry, she contributes to solving the key problems in Estonian society by being the best example of a socially active intellectual,” as noted in the proposal. In its supporting recommendation, Tallinn University added that Viivi Luik’s works contain the dimension of eternity, the rise beyond time and space, a clear vision of the global network of discourse, and the soul of a great writer. The Under and Tuglas Literature Centre of the Estonian Academy of Sciences pointed out that Viivi Luik’s oeuvre has influenced the entirety of Estonian culture and the publishing of her new works has often become a major event.

According to the nomination by the Akadeemia magazine, Fred Jüssi has over the decades inspired the Estonian people to understand and appreciate the value of nature and their environment. He has been able show our strength, while his suggestive nature has intrigued both listeners and readers. “We all love Fred Jüssi. And through him, we have also learned to love Estonia,” states the nomination. The national broadcaster, Eesti Rahvusringhääling, noted there are many people in Estonia that would say that one of the greatest influences in their spiritual life has been Fred Jüssi—a man on the crossroads of nature and culture. “A global thinker that has given us wisdom and an enthusiasm for life. One of the great men of our age,” the national broadcaster’s nomination adds.

The State Cultural Lifetime Achievement Award, a sum of 64,000 euros, is awarded for long-term outstanding creative activity. Three lifetime achievement awards are given each year.

There are five awards each year for the Annual State Cultural Prize. This year, these are awarded to Kristjan Suits for stage, costume and video design, as well as exhibition and concert staging; Greta Koppel, for her exhibition entitled “Michel Sittow: Estonian Painter at the Courts of Renaissance Europe” as well as the book on the exhibition; as well as Juhan Rohtla, Koit Ojaliiv, Joel Kopli and Eik Hermann for the architectural solution for the Estonian Academy of Art’s new building; and choreographer Olga Privisand artist Marko Mäetamm for their outstanding creative activities in the last year.

The award for lifetime achievement is given to an individual whose years of contribution to Estonian sport have earned high public regard and whose life work has been an example for the younger generation. Two lifetime achievement awards with a value of 40,000 euros each are presented each year.

Long-time athletics coach Toomas Merila was nominated for the state sport lifetime achievement award by the Estonian Athletic Association. Merila has been a successful javelin throw coach with a wide field of work, training everyone from children to Olympic athletes. For over 20 years, he has been the senior coach for the Estonian youth team and coach for throwing events for the senior team. For two decades, he has been an active member of the Athletic Federation’s Coaching Council, later also serving as its chairman. Since 1967, Merila has continued to work as a teacher and coach at the former Tallinn Sports Boarding School, now the Estonian Sport Secondary School, and since 2004 as a coach at the Audentes Sports Club. His students have included world champion Andrus Värnik, as well as Moonika Aava, Tanel Laanmäe, Liina Laasma andRisto Mätas. Under the guidance of Toomas Merila, several of his former athletes have become successful coaches in their own right. He was named the best athletic coach in 2000 and 2003, and he has been awarded the Coaching Award (2013) by the European Athletic Association (EAA) as well the Order of the Estonian Red Cross, 4th class (2004).

Long-time athlete and sport manager Toomas Tõnise was nominated as a candidate for the state sport lifetime achievement award by the Estonian Modern Pentathlon Association, Estonian Equestrian Federation, Estonian Handball Association, Estonian School Sports Association, the Audentes Sports Club Non-Profit Association, and the Anija Parish Sports Complex Foundation. Toomas Tõnise’s contribution to the development and management of the modern Estonian sports system has been remarkably diverse. Under his leadership, the Soviet era’s centralised sports system was transformed into a democratic, volunteer-based sports model based on the western system, and sport code-centred management was developed. Tõnise was involved in restoring the continuity of major sports organisations such as the Estonian Sports Federation and the Estonian Olympic Committee, as well as the restoration of their rights in the international sports movement. He has played a decisive and leading role in the development of the coaches’ certification system and in organising the improvement of coaches’ qualification levels. He has also played a leading role in the collection of Estonian sports statistics and the development of the national sports database, the Estonian Sports Register. Toomas Tõnise has been awarded the Order of the White Star, 5th class (2004), the Harjumaa County Decoration (2012), and in 2017, he received the Estonian Olympic Committee’s honorary decoration and was named an honorary citizen of Harjumaa County.

The presentation of annual awards considers results from the previous calendar year, successful coaching, performance in sport organisation, and contributions to the promotion of sport, sport pedagogy and sport science. The annual award is worth 9,600 euros, and six such prizes are awarded each year.

The annual prize has been given to freestyle skier Kelly Sildaru, who won two gold medals at the Junior World Freestyle Ski Championships in the slopestyle and halfpipe competitions, and was selected as the Estonia’s young athlete of the year; and javelin thrower Magnus Kirt, who won a bronze medal at the European Athletics Championships and was selected as Estonia’s male athlete of the year. The award was also given to competitive dancers Konstantin Gorodilov and Dominika Bergmannova, who won gold medals at the European and World Championships in the Ten Dance competition. The head coach of the Estonian volleyball team, Gheorghe Cretu, receives the annual award for coaching the Estonian team to a win in the European Gold League and for qualifying for the European Championship final tournament; triathlete Marko Albert for his bronze medal in the Long-Distance Triathlon World Championships; and football promoter Aivar Pohlak, for his efforts in organising the historic UEFA Super Cup football match in Tallinn.

The presentation of all prizes will take place on the Republic of Estonia’s 101st anniversary, on 24 February at 13.30 in Tallinn at the Estonian Academy of Science’s Hall. At the same event, the state science awards, and the Ferdinand Johann Wiedemann language award will also be presented.