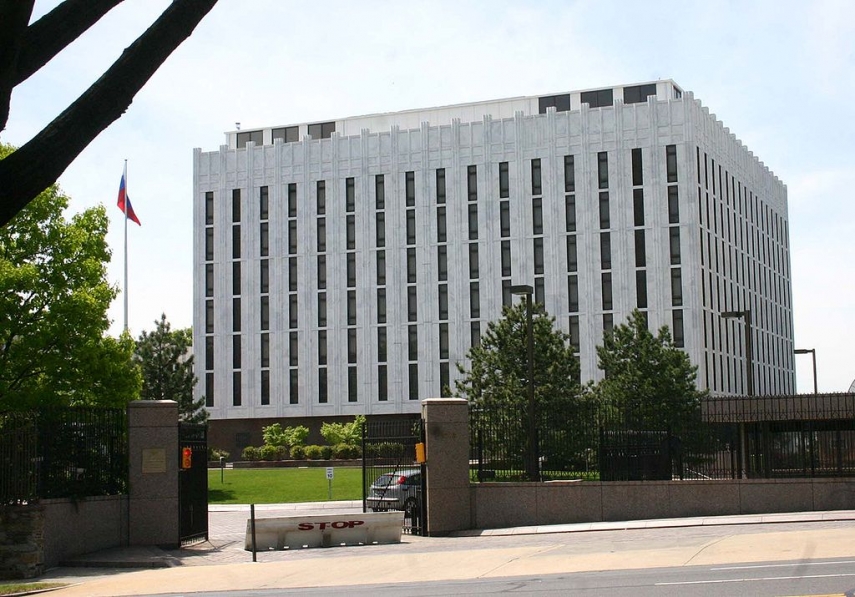 MOSCOW - Russia is expecting the United States to condemn Ukrainian radicals' actions as regards Russian missions and stop supporting nationalism in Ukraine and countries of Eastern Europe, the Russian Embassy in Washington DC said in a statement following the attack on the Kyiv office of the Federal Agency for the Commonwealth of Independent States, Compatriots Living Abroad and International Humanitarian Cooperation (Rossotrudnichestvo).

"This crime is far from being the first attack of radicals on Russian diplomatic missions in Ukraine. Those attacks have been ongoing for several years. We have yet to hear their appropriate assessment and condemnation by the U.S. authorities. It is possible that such actions are inspired by the example set by Washington, i.e. the seizure of Russian diplomatic property," the Embassy said.

"We are expecting Washington officials to stop supporting savage nationalism not just in Ukraine but also in other countries of Eastern Europe. Judging by the events in Kyiv, this is fraught with attacks and an escalation of xenophobia and extremism," it said.

Members of the Ukrainian nationalist organization C14 attacked the Russian Cultural Center in Kyiv on February 17, the Embassy said.

"Thirty radicals led by Verkhovna Rada deputy Andriy Lozovoy (the Radical Party) broke into the building where about 50 children and the same number of adults were present at the moment. Fascist-minded attackers destroyed an exhibition dedicated to singer Fyodor Shalyapin, wrote extremist slogans on the walls, insulted Russian diplomats, and defiled the Russian flag," the statement said.

"The radical attack must have been prompted by the provocative statements made by Ukrainian President Petro Poroshenko at the Munich Security Conference: he called for banning the Russian flag. The outrage continued even after the police arrived and did nothing to stop the radicals. The criminals do not fear justice and do not hide their faces," the Embassy said.

Radicalized nationalism has acquired the status of a state policy in Ukraine, it said.

"Amid the intense domestic disagreements, political turbulence, and social discontent, the Kyiv administration is pushing for Russia's presentation as an external enemy. Crimes against Russian property and citizens in Ukraine are being encouraged, and the authorities are furthering persecution of the canonical Orthodox church, the Russian language and culture by legislative means," it said.

"Freedom of speech is being limited, and attacks on media outlets, journalists, and bloggers are common. [C14 group members are being tried for killing journalist Oles Buzyna in 2015. His home address was published on the Peacekeeper website. The portal migrated to U.S. servers in 2017]," it said.

"Russia urged a rapid response of the OSCE to the outrageous manifestation of aggressive nationalism and an urgent incident report, which will inform all OSCE member countries of the barbaric act. The OSCE Parliamentary Assembly will meet next week. U.S. parliamentarians will have a perfect chance to speak up on this issue, especially as their colleague, Verkhovna Rada deputy and Radical Party member Andriy Lozovoy, led the attack," the Embassy said.