Russia and the Baltic States: Time to Get the Legal Facts Right 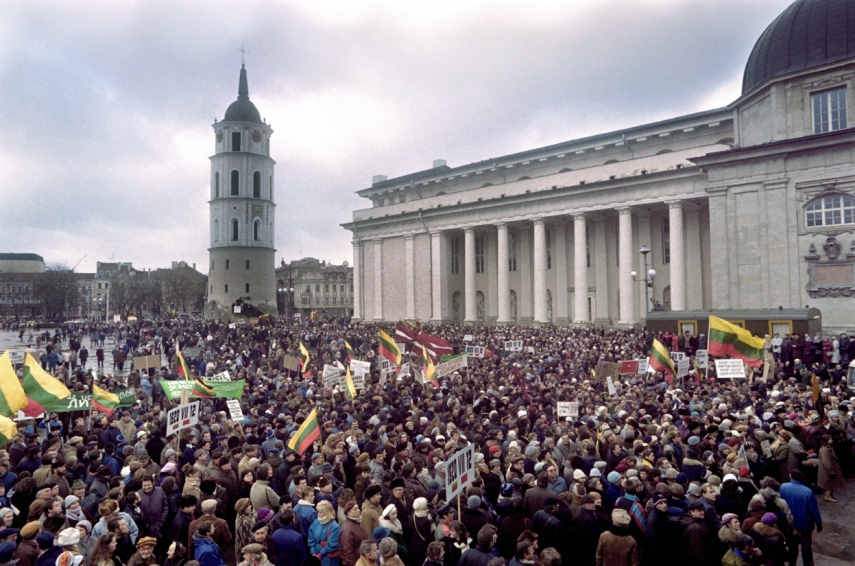 The Baltic States broke from the USSR in 1991 [Image: theatlantic.com]

GHENT — Since the annexation of Crimea and the outbreak of the military conflict in eastern Ukraine, the security situation in the Baltic States has become a hot issue. Regular violations of national airspace, increased military trainings and bold political statements illustrate the rising tensions.

In this context, it has been argued by some that “the Russians are coming” whereas others believe that the idea of a Russian invasion in the Baltics is an absurdity.

In a recent interview with the Financial Times, Kremlin Chief of Staff Sergei Ivanov described the perceived threat of a Russian intervention as “raving nonsense” and the result of “a psychological disorder”.

However, the message a few days later that the Russian General Prosecutor is asked to review the legality of the Baltic States’ independence is not very reassuring. Even though the Kremlin quickly refuted the initiative, it further contributes to a climate of distrust and confusion. This makes it more than ever necessary to get the legal facts right.

First and foremost, the statehood of the Baltic States does not depend upon the question whether or not the USSR State Council was right in recognizing their independence in September 1991 under the at that time applicable Soviet Constitution. The simple explanation is that, from the perspective of international law, Estonia, Latvia and Lithuania never legitimately belonged to the Soviet Union.

Their incorporation in 1940 took place under the threat of military force and was a consequence of secret protocols to the 1939 Molotov-Ribbentrop Pact, which the European Court of Human Rights described as “an agreement contrary to the generally recognized principles of international law.” (Case of Zdanoka v. Latvia, para. 119).

Proceeding from the rule that illegal acts cannot have legal consequences, the Baltic States cannot be conceived as constituent parts of the former Soviet Union.

As a result, they did not secede from this Union but restored their independence after a period of occupation. This principle of state continuity is at the very heart of the present day Baltic States’ constitutional orders and places them in a unique position compared to the other former Soviet republics.

It is well known that Russia has a fundamentally different reading of the events of 1939-1940 and refuses to recognize the thesis of Baltic state continuity.

This has significant implications for discussions on issues such as citizenship and border delimitation. Nevertheless, it does not affect the observation that plenty of bilateral agreements have been concluded in the past decades, implying that the parties recognize each other as subjects of international law and sovereign states.

In other words, the request to review the legality of the Baltic States’ independence is nothing more than an unnecessary provocation which does not make any sense from a legal perspective.

One may well agree that there is no real threat to the sovereignty of the Baltic States but the events in Ukraine and, previously, in Georgia explain the feeling of insecurity in the region.

This threat perception does not fade away with the announcement of Vladimir Putin’s press secretary Dmitry Peskov that the Kremlin does not support the investigation of the Baltic States’ independence.

What is needed is a clear-cut commitment to some basic legal principles circumscribing the role of kin-states in protecting their compatriots abroad.
Russia’s foreign policy concept is very explicit in defining the “comprehensive protection of rights and legitimate interests of Russian citizens and compatriots residing abroad” as a crucial foreign policy objective.

In principle, there is nothing wrong with this statement. More or less similar provisions can be found in foreign policy doctrines and constitutions of many other countries, including EU Member States (Hungary, Poland and Croatia for example).

The main problem, of course, is the interpretation of the kin-states’ right to interfere in neighbouring countries. In this respect, it is relevant to point to a report of the Council of Europe’s Venice Commission on the preferential treatment of national minorities by their kin-state.

In the Commission’s opinion, the possibility for states to adopt unilateral measures for the protection of their kin-minorities is conditional upon respect for some fundamental principles such as the territorial integrity of states, pacta sunt servanda, the principle of good neighbourliness and the respect for human rights and fundamental freedoms.

Only an explicit endorsement of those principles, which were unfortunately not respected with respect to Ukraine, may counter the current climate of suspicion and open the gates to a constructive dialogue on neighbourhood relations.

The writer is a Professor of European law at Ghent University in Belgium.