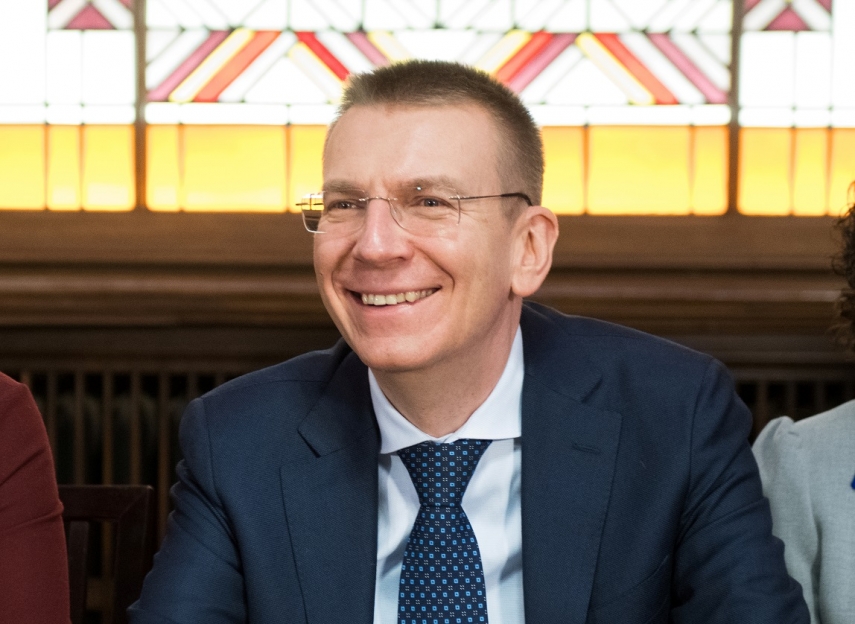 RIGA - Latvia’s bilateral relations with a number of European countries are good and even excellent, Foreign Minister Edgars Rinkevics said during a meeting with non-resident ambassadors to Latvia.

As LETA was told at the Foreign Ministry, Rinkevics met with non-resident ambassadors to Latvia on Friday or a discussion on the eve of the anniversary of the international de iure recognition of the Republic of Latvia, on current bilateral matters and international policy, including topics related to the withdrawal of the United Kingdom from the European Union (EU), the Three Sees Initiative, the Middle East Peace Process, cyber-security, and the crisis in Venezuela.

At the beginning of the meeting, the foreign minister informed the visitors about the priorities of the new Cabinet and the main tasks for the Latvian Foreign Service in 2019.

The minister expressed satisfaction with the good relationship between Latvia and Romania at all levels, especially in building parliamentary contacts and the strengthening of economic and cultural links. Rinkevics congratulated Romania on the successful start of the Presidency of the EU Council.

The foreign minister also spoke with appreciation of the good bilateral relations between Latvia and Bulgaria, which hold a high potential for growth. The minister thanked Bulgaria for successfully presiding over the Council of the EU.

Rinkevics characterized the political dialogue between Latvia and Croatia as intensive, and he congratulated Croatia on its preparations for the EU Presidency in the first half of 2020.

Rinkevics expressed certainty that Latvia and the Holy See were enjoying very good relations. We are honored and greatly appreciative of the visit by Pope Francis to Latvia on 24 September last year, said the minister while emphasizing that the visit had been a historic one, with a great symbolic meaning. Rinkevics thanked the Papal Nuncio for his great contribution to the organizations of His Holiness’ visit.

The Latvian foreign minister noted that Latvia and the Great Principality of Luxembourg have excellent bilateral relations and an intensive political dialogue at all levels, as well as close cooperation in the EU and NATO. The minister also voiced hope that Grand Duke Henri of Luxembourg would visit Latvia the present year, which was expected to offer an additional impetus to dynamizing economic cooperation and developing joint projects between both countries.

The minister praised the bilateral Latvian-Austrian cooperation and expressed admiration about the major input by the Embassy to the relations between the two countries regardless of its limited capacity.

The foreign minister commended the friendly relations with Slovenia and offered thanks for the participation of Slovenian soldiers in the NATO battle group in Latvia.

“Latvia would like to intensify the political dialogue with Armenia, develop cooperation between line ministries and parliamentary contacts. The potential of economic cooperation is still underutilized. We appreciate the process of parliamentary elections held in Armenia last December. We hope that Armenia will soon have an officially approved government, which will move ahead with reforms in the justice sector and in the areas of anti-corruption, good governance and economy, as well as working on the implementation of the EU-Armenia Comprehensive and Enhanced Partnership Agreement,” said the Latvian foreign minister.

“Latvia highly values the political dialogue with Vietnam. Political consultations between the Foreign Ministries of Latvia and Vietnam held on 12 June 2018 in Hanoi was yet another proof to positive and constructive relationship. To uphold an active exchange of opinions and dialogue, we invite the Vietnamese side to political consultations in Riga this year,” said the foreign minister.

Rinkevics noted that Latvia was interested in setting up political dialogue and economic cooperation with Tajikistan, especially in the transit, logistics and transport sectors.

“We are interested in expanding bilateral political contacts with Palestine. We appreciate the successful cooperation with the Mission of Palestine in Helsinki and the contribution of the Head of Mission, Taissir Al Adjouri, to the development of bilateral relations,” Rinkevics underlined.

The minister commended the bilateral relations between Latvia and Morocco, and he expressed the wish to expand bilateral economic cooperation in the food and timber processing sectors.

Referring to the state of affairs in Afghanistan, Rinkevics expressed support for the efforts of the Afghan government to ensure security, stability and development in the country in the long term, as well striving to achieve the engagement of the Taliban in the political dialogue. Latvia believes that the peace process should take place so as to consolidate the principles of democracy, human rights and the rule of law and avoid undermining the accomplishments in the strengthening of the education system and public administration institutions.

During the meeting, the minister invited Namibia to sign a Memorandum of Understanding on political consultations between Latvia and Namibia to define effectively the areas of common interest.