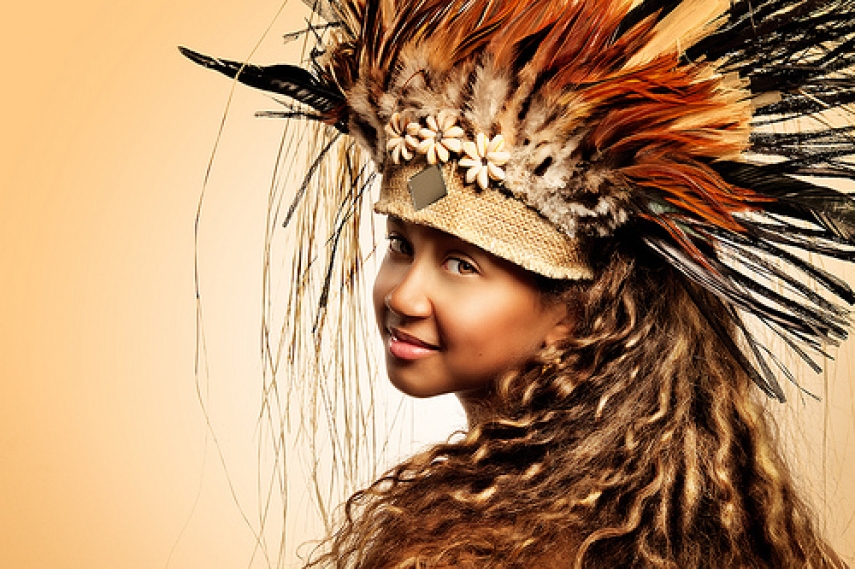 PACIFIC CULTURE: A diversity of art and cultural performances were on show.

Riga was imbued with  some of this rich cultural tradition  of the Pacific Islands people,  as  over 150 Pacific Islanders  descended on the Latvian capital at the end of July to August 2  for the  Pacific Islands Festival Europe (PIFE), which was held at the premises of the  Riga Jewish Community Centre on Skolas Iela. The festival is held  annually in a different European city.

Originally planned as an outdoor event  at Vermanes Garden Park in central Riga., which due to exorbitant financial demands made on the festival organizers by the Riga City Hall for staging a cultural event, festival organizers were forced to explore alternatives, Jurmala was another considered option.
The Jewish Community Centre soon offered its services.

‘’The 150 Pacific Islanders who attended the event from all across Europe are extremely grateful to the Riga Jewish Community Centre for extending their friendship to all pacific islanders’’ said the festival organizer, Mr. Suluo Daunivalu, a  Fellow of the Royal Society of Arts (London), a Fijian who resides between Vilnius, Riga, and Zurich, a Curator of the Museum of Pacific and Oceanic Arts, located on Vilandes 16, located in Riga’s exclusive prime residential ‘’quiet town’’ quarter area.

‘’We staged a truly historical event. Latvia has never seen such a large assembly of Pacific Islanders gather in Riga. We presented and  displayed such diversity of cultural heritages drawn from the pacific island regions of Polynesia, Melanesia and Micronesia,’’ said Daunivalu.

The Pacific Island region spans a quarter of the globe, containing a richness of cultural heritage which is drawn from an area which comprises between 20,000 to 30,000 islands, spanning from the continental islands of New Zealand, New Guinea — and to smaller and more remote atolls located in  the central and east Pacific Ocean.

Anita Smith, who is closely associated with the Cultural Heritage Centre for Asia and the Pacific in Australia, and the author of An Archaeology of West Polynesian Prehistory, and who has herself written extensively on the region, has stated that  ‘’this Oceanic world has given rise to traditional indigenous ways of life that are unique to the region and expressed through outstanding cultural landscapes and seascapes, settlements and monuments and in the intangible heritage of traditions, knowledge, stories, song, music and dance.’’

For three days, the Pacific Islands Festival Europe (PIFE) took over the Riga Jewish Community Centre to showcase the Pacific Islands varied and complex culture and customs, and offered  a wonderful diversity.
On the ground floor of the centre, stalls offered traditional pacific island craft objects. On the second floor an exhibition of traditional authentic artifacts and paintings from the South Pacific was on display.  Dance work shops and drama workshops where also held throughout the day. The evening saw graceful dance performances presented by pacific islanders who reside in various countries throughout Europe.

The Pacific Islands Festival Europe (PIFE), commenced in 2008. Initially it was a small gathering of Pacific Islanders residing in Berlin and throughout Germany. The festival has been ongoing ever since and has continually grown over the past five years. ‘’It attracts pacific islanders who mostly live in the northern hemisphere and in particular Europe,’’ said Daunivalu.

Previous years has seen the festival being staged in Helsinki, Berlin, Basel, and in 2014 the event was taken to the Spanish city of Barcelona.
For this years festival Daunivalu introduced a more diverse program, which included more performances, as well as seeing a larger contingent of Pacific Islanders having participated in the Riga event.

The festival message which the organizers wished to convey about the Pacific Islands was that there are many pacific islanders living in Europe who are professionally active in numerous professional fields. ‘’The festival aimed at defining us not by the smallness of our islands, but by the greatness of our oceans” said Daunivalu.

The festival perhaps displaced the numerous old stereotypes in people’s minds of the region, of pounding drums and grass skirts, and presented a festival displaying a greater diversity of both traditional and contemporary cultural events.
Naturally, the  popular imagination of the Pacific Islands still holds a strong sway. The power of this stereotyp conjures up varying exotic imaginary both serene on the one hand, and savage on the other. Both are misleading.  Of majestic un-spoilt crowded beaches, romantic islands filled with sun and love, as well as imaginary which is far more ominous, of stories of mysterious rituals and of cannibalism. And indeed artifacts were on hand, in the form of  various sized folk like instruments that where used to extract flesh.

Of relationships between the Pacific Island region and Europe
Daunivalu was pleased that in June of this year the Latvian Foreign Minister Edgars Rinkevics, himself paid a visit to Fiji, representing the EU’s High Representative for Foreign Affairs and Security Policy Federica Mogherini, to meet Fiji’s prime minister Frank Bainimarama.  This was one of the European Unions first official meeting since the coup of 2006.
Fiji and the European Union have agreed to work together to tackle a series of international challenges, of which the most pressing on the discussion agenda was climate change.

Rinkevics himself stated that Fiji has striven to carry out remarkable reforms since the country returned to democracy, and noted the setting up its new parliament and ratifying the UN Convention Against Torture. Rinkevics further noted that Fiji appointing a number of women to key political positions may serve as an example to the entire Pacific region.

‘’Rinkevics also met with the Republic of Fiji’s Foreign Minister Ratu Inoke Kubuabola “to confirm Latvia’s interest in developing bilateral relations”. I was delighted to have heard of this intention by Minister Rinkevics. I trust that the Pacific Islands Festival Europe (PIFE) which we staged in Riga can serve as a bridge between Fiji and all Pacific islanders and the Latvian people, and has enabled them to learn more about our diverse cultures and traditions,’’ said Daunivalu.
This festival would not have been possible without the support of the festival’s general sponsors – The Tapa Foundation. The Chairman, Juris Gulbis, has himself spent considerable years of his life in the South Pacific.

The highlight of this years festival was the performance of the Vou Dance Group, which is considered  Fiji’s most versatile and internationally renowned performance Dance Company. VOU has performed hundreds of shows across Fiji and abroad showcasing a wide range of styles from Pacific, Bollywood, and traditional Fijian meke to Contemporary, Jazz, Ballet, Ballroom dancing and many others. All the way from California, The Pacific Breeze band, which is led by Tongan musician Kasete Naufahu, provided live music throughout the weekend. Also new this year was the appearance of  a Polynesian Dance group based in Estonia called the Aka O Pele group.

Another festival highlight was the guest appearance of the renowned New Zealand chef, author and television presenter Robert Oliver. Oliver is an Ambassador for Le Cordon Bleu, New Zealand and the Pacific Islands, which is networked to that venerable educational institution which serves as a guardian of French culinary technique, and it dedicated to providing the highest level of culinary

Further information on Pacific Art can be found at www.tapa.lv