Riga, Ritmi, and all that Jazz 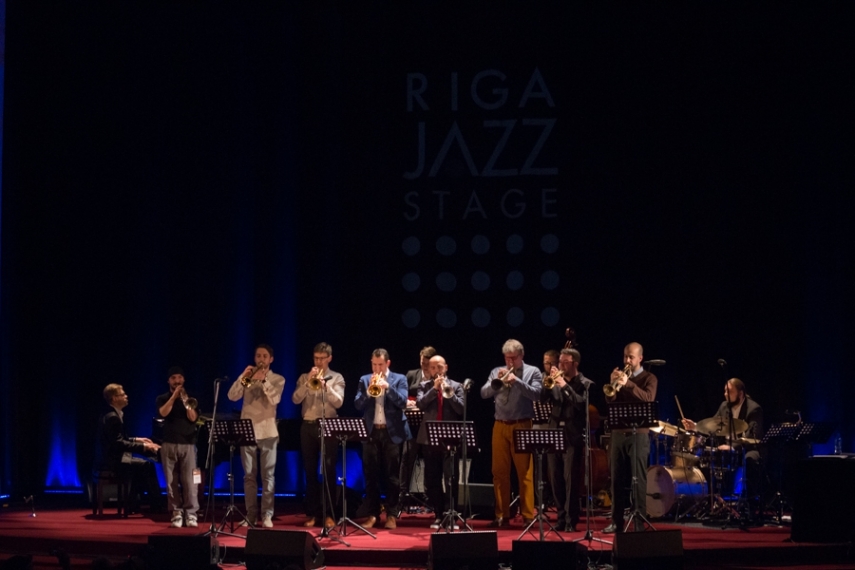 RIGA - The Baltic region is becoming increasingly well regarded as a top quality gathering place for jazz muscians and fans alike. This year’s Riga Jazz Stage 2015 competition, an event described by British jazz superstar vocalist, pianist and songwriter Anthony Strong as ‘’an important jazz fixture in the calendar — which up-and-coming jazz musicians should take note’’, welcomed 24 young talented jazz contestants from 13 countries around the world, featuring 8 trumpeters and 16 vocalists who vied for the Grand Prix in the categories,  ‘’Jazz Vocal” and ‘’Jazz Trumpet”.

The international jury awarded the “Jazz Vocal” Grand Prix to the Latvian,  Daumants Kalniņs, and “Jazz Trumpet” Grand Prix to Gerhard Ornig, from Austria; who also received the Best Improvised Jazz Solo award.  A notable award was also made by  the Latvian composer and pianist Raimonds Pauls to the Russian vocalist Polina Zizak, who received an award of 1,000 Euros.

The Jazz Vocal Grand Prix winner Daumants Kalniņs will be appearing at this years Riga Ritmi festival on the 2 July with his ensemble Daumants Kalniņs 5-tet at the Riga Congress Centre New Hall.
The Riga Jazz Stage has had a brief but notable history. Founded in 2004, the Riga Jazz Stage ran for four years until 2008, when it had a five year hiatus before being reinstated again in 2013.

According to Maris Briezhalns the ‘’Riga Jazz Stage offers a wonderful opportunity for new jazz artists to enter the world of jazz music, to gain experience on the stage in performing to sold out venues, and to present their talents on an international stage, to be heard by a jury consisting of professional musicians, music producers, festival organisers and highly recall jazz teachers’’.

Anthony Strong, who closed the Riga Jazz Stage 2015 with a concert at the Award Ceremony, has since signed a recording contract with the Parisian label Naive Records.The release of his debut album “Stepping Out”, which went on to reach the number 1 spot on the US iTunes Jazz Charts, Amazon Jazz charts in Germany, which has led to Strong being hailed as “a major new talent”.

Riga Jazz Stage 2015 “was  indeed fortunate to have been able to bring Anthony Strong to Riga for this years Riga Jazz Stage to perform at the closing Award Ceremony concert, and to also be one of the Riga Jazz Stage competition jurors’’ stated Maris Briezhalns, founder and artistic director of both the ‘’Riga Jazz Stage,’’  and the Riga Ritmi Festival.
And there were many other fine performers present. The Riga Jazz Stage also saw the 2014 vocal Grand Prix winner, Kristine Praulina from  Latvia, perform the world premiere of her seven part interconnected musical composition. A work which Praulina and her ensemble are currently recording, and intending to release commercially in the near future.
The composition held a special place in Praulina’s heart: “It has a linear idea of hope, its free music, and its about trying to discover oneself through music’’ Praulina stated.

Asked about how winning the Riga Jazz Stage  2014  competition has assisted her budding performing career, Praulina  stated that ‘it has been a artistically rewarding to work with the Latvian Radio Big Band, with who I have performed twice with in Moscow, as well as in Finland, and will be travelling also to Brussels for performances’.

If the audience attending the three day sold out event at Riga’s luxurious varied neo-rococo Splendid Palace, a Latvian national monument built in 1923, which was filled predominantly with young jazz enthusiasts, and the young world Jazz talent who had travelled to Riga to perform, was any indication of the future of Jazz, then Jazz’s future indeed looks bright. Jazz competitions such as the Riga Jazz Stage, and  Jazz festivals thoughout the Baltic States, as the Riga Ritmi Festival, the Kaunas Jazz Festival, and the Tallinn International Festival Jazzkaar, reach out to younger audiences to build newer and more sustainable audience bases.

The organisers of the Riga Jazz Stage were unwilling to reveal the operating budget for the event, claiming confidentiality.
Transparency was however clearly evident with Jonas Jucas, founder and artistic director of the Kaunas Jazz Festival, who informed The Baltic Times,  that the  Kaunas Jazz Festival’s, operating budget is 300,000 Euros.
Jucas was one of the international jurors who found this years competitors of the Riga Jazz Stage to be of an extremely high level.  The Kaunas Jazz  was launched in 1991, and according to Jucas  ‘’its 24 year-long history, beyond any doubt, proves that its start was an important event for jazz music lovers and an exceptional happening in the cultural life of Lithuania’’.

The International Jazz Festival Kaunas Jazz takes place in Kaunas in late April and in Vilnius in early May.  ‘’The major jazz festivals in the Baltic states,  Jazzkaar festival in Tallinn, Rigas Ritmi festival in Riga have been Kaunas Jazz partners for many years now’’ said Jucas, along with ‘’April Jazz festival in Espoo, Finland, Lotos Jazz Festival (Bielska Zadymka Jazzowa) in Poland’’.

This year’s 26th  Tallinn International Festival Jazzkaar which recently was staged from the 17 - 26 April, saw record crowds, with  over 21,000 music lovers  attending scheduled 200 events.  “Jazzkaar’s move to the two venues in the Telliskivi creative district [a revamped complex in Tallinn of 11 old industrial buildings, formerly the Baltic Railways factory] was highly successful.

The new location became a high energy scene with a hip, communal festival vibe. The Jazzkaar program was strong and varied as always, and this year more of the best music came from Estonians than ever before,” noted journalist Tom Conrad from the respected US publication JazzTimes.

The Riga Ritmi Festival which runs this year from the 1 to the 5  July, is again excepted to be a real musical celebration with performances of outstanding artists such as  the Latin American pianist Raman Valle, French-Dominican vocalist  Cyrille Aimee, the award winning American Jazz vocalist, guitarist, and songwriter Allan Harris, as well as Kristine Praulina and Friends,  and many others.

A full program of this year’s festival can be found on the website.