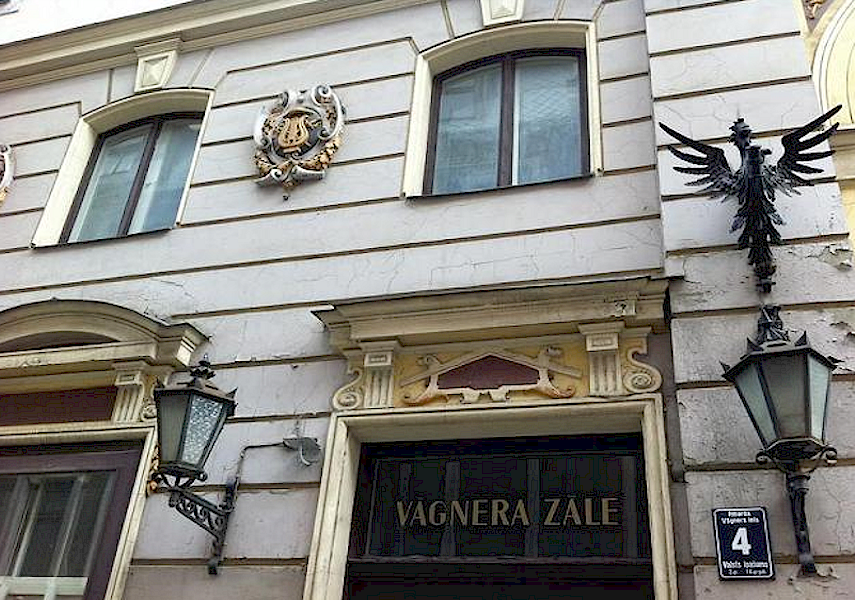 RIGA — The operatic works of Richard Wagner are epic in scale, including his four-opera “Ring Cycle,” a complex melodrama that demands 18 hours of performance time. Perhaps just as epic in scale are the renovations necessary to rehabilitate the theater and concert hall bearing Wagner’s name in Riga’s city center.
Wagner, a controversial figure whose innovations changed the worlds of opera and classical music forever, holds an indelible role in the musical history of Latvia’s capital. He arrived in Riga in 1837, becoming the first Chief Conductor of the City Theater at the age of 24. During his two years as Kapellmeister he oversaw the production of 39 operas; his dismissal came only as a response to the composer’s alleged financial misdeeds in Riga.

One assumes that Wagner spent a tremendous amount of time in the theater that now stands at 4 Richard Wagner Street in Riga’s Old Town. Built in 1782 by the Baltic German architect Christoph Haberland, the theatre served as the city’s cultural center for over a century. Today, Haberland is renowned as one of Latvia’s leading exponents of classicism architecture; his work stands out in a city known for its Art Nouveau buildings. It remains likely that Wagner was inspired by details of the City Theater in Riga when designing his Bayreuth Festival Theater, a German opera house created specifically for the performance of Wagner’s operatic works.

Riga’s legendary City Theater is known today as Wagner Hall, and its last use occurred in 2007 when the functioning concert hall was forced to shut its doors in response to worsening structural conditions. The building is currently managed by the SJSC State Real Estate and the Ministry of Finance.
In 2011, Hanza Projekts, Ltd. supervised the examination and analysis of the Wagner Hall’s technical condition; subsequent follow-up work occurred during autumn 2012. Since then, no further analysis or renovation has taken place in this rapidly declining building.

Information from the website of The Richard Wagner Theater House Renovation Fund of Riga states that Hanza Projekts’ conclusions “reaffirmed the cultural, historical, and artistic value of architectural details that should be restored, as well as the unsatisfactory condition of the building’s foundation and weight-bearing structures. Yet, in spite of the study’s recommendations to stabilize and reinforce the building’s foundation, it has not been done.”

It becomes apparent that necessary leadership in the Latvian government is nonexistent to resurrect this formerly majestic building as it falls into a state of tragic disrepair. A building that once bustled with artistic activity now suffers from deep cracks in the walls and ceiling. Renovation becomes even more urgent when one considers the building’s illustrious musical legacy, which belongs not only to the cultural heritage of Riga and Latvia, but indeed to all of Europe.
Throwing in moral support to discussions of the building’s future, Latvia’s Ministry of Culture trumpets: “The cultural and historical significance of the Wagner Hall is undoubted.”

However, a lengthy list of necessary rebuilding projects has placed pressure on the availability and allocation of government funds. Included amongst these projects was the 2013 restoration of the fire-ravaged Riga Castle, a 16th century building that serves as the official residence of the President of Latvia.
At time of publication, The Baltic Times has not received a response from State Real Estate regarding the current status of the building. Speaking on behalf of the Ministry of Culture, Dagnija Grinfelde states: “The Ministry of Culture in cooperation with the State Real Estate has considered the possibility to renovate the Wagner Hall through a private partnership, partly providing the cultural function in the building. Unfortunately, there is no necessary funding in the state budget for this purpose.”

In addition to lack of state funds, it must be considered that private funds will be difficult to come by due to the fractious nature of Wagner’s character. A known anti-Semite, Wagner’s works were held in high regard by the Third Reich and undoubtedly served as an inspiration to some who took up the cause of the Nazi party.

Indeed this once-great concert hall will require substantial financial backing from the government or private sector if it is to be restored to its former state. The Richard Wagner House Renovation Fund of Riga was founded in 2014 to popularize the idea that renovations are urgently required. The Renovation Fund, however, “is currently not seeking donations and has no balance.” This comes according to Gunars Nagels, Director of the Museum of the Occupation in Latvia. “Our work has stagnated since the beginning of the year due to various reasons, but I hope that will change soon.”
Sergejs Nikiforovs from the Nams Architectural Studio in Riga believes that the best way to proceed would be to undertake renovation of the concert hall in its previous shape.

“The costs would vary and would depend on the scale of renovation works,” said Nikiforovs.
“Currently the property belongs to the Latvian State; that means that leadership should be provided by the state as part of the National Tourism Attraction Program.”
This problem surrounding the renovations of the Wagner House, Nikiforovs said, “could not be solved only through the means of enthusiasm of musicians.
“I would propose to launch an overwhelming international marketing campaign to advertise Riga as a city of Richard Wagner.”

Depeche Mode to perform in Tallinn next August