Pope to pay tribute to Baltic freedom amid abuse crisis 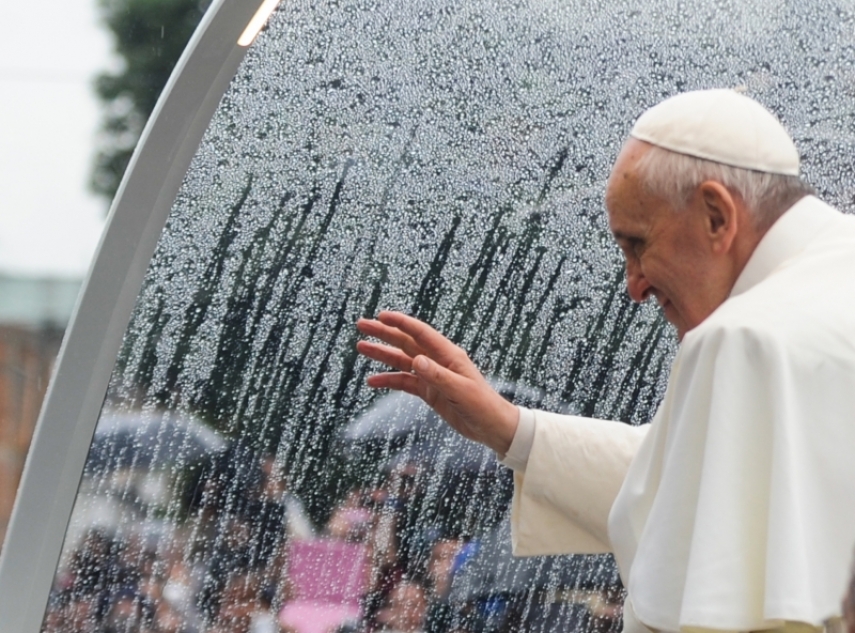 VILNIUS - Pope Francis will start a Baltic tour in Lithuania on Saturday during which he will pay homage to the history of a region that still bears the scars of its Nazi and Soviet occupations, the AFP news agency writes in a special article.

His four-day stay will come in radically different circumstances to the last papal visit a quarter of a century ago, with the Church currently reeling from a string of clerical child abuse scandals.

The pope will tour Estonia, Latvia and Lithuania as they celebrate 100 years since declaring independence following World War I.

The trip will also take him geographically close to Russia, where Vatican diplomats have been trying for years to arrange a papal visit.

The last century was marked by the Nazi invasion -- which wiped out almost all of the Baltic region's Jews -- and then decades of Soviet occupation during the Cold War.

"The visit reflects the pope's idea of visiting the periphery rather than established centers of power or wealth," Lithuanian publicist Donatas Puslys told AFP.

Behind the Iron Curtain, the Catholic Church played a key role in the non-violent anti-Soviet resistance, especially in Lithuania, the only Catholic-majority country of the three.

"The Church was a fortress for all dissidents, not only Catholics. It strongly resisted Sovietisation and defended the rights of believers," historian Terese Birute Burauskaite told AFP.

As a result, it was persecuted during that time, with both priests and bishops targeted in crackdowns by the authorities.

The pope will also visit a museum in the former KGB building in the Lithuanian capital Vilnius. And he will pray at a memorial to the victims of the Holocaust.

After spending the weekend in Lithuania, the pope will travel on to Latvia on Monday and Estonia on Tuesday.

Since then, the three have thrown their lot in with the West, turning away from Moscow's orbit by joining NATO and the European Union, the AFP points out.

While that has led to solid economic growth, it has also meant social inequality and emigration to the richer western European countries.

While the Baltic states have a similar 20th-century history, their religious identities differ substantially.

According to the Vatican, nearly 80 percent of the Lithuanian population identifies as Roman Catholic, against only 21 percent in Latvia and less than one percent in Estonia, one of Europe's least religious countries.

Estonian Catholics hope the papal visit will help them in their quest to make Eduard Profittlich, a Roman Catholic bishop who died in a Soviet prison in 1942, Estonia's first Catholic saint.

As for Lithuania, religion is ever-present in its countryside, with crosses evident in most towns and villages. The Church also plays an important role in policy-making.

It has been among the leading voices against the ratification of the Council of Europe's Istanbul Convention fighting violence against women. They object that it promotes "gender ideology" that would undermine the traditional family.

The church's influence also explains why Latvia and Lithuania are among only six EU countries not to have recognized same-sex partnerships.

But the Catholic Church is under increasing scrutiny because of the escalating worldwide sex abuse crisis.

Scandals in Australia, Europe, and North and South America have involved widespread claims of abuse -- and cover-ups -- by clergymen and lay members.

Nor has the Baltic region been free from the scandal.

Earlier this month, a Latvian Catholic priest was arrested on allegations that he raped a mentally handicapped victim of human trafficking.

And in March, the Lithuanian church admitted to a sexual abuse case in the 1970s after an internal two-year investigation.

In August, Pope Francis declined to comment on a claim that he ignored sexual abuse allegations against a senior clergyman in the United States.

"No doubt these events will cloud the pope's visit to Lithuania because the Catholic Church is not a local but a global community," sociologist Milda Alisauskiene told AFP. "However most Lithuanian believers will probably focus more on their personal emotions and feelings as they meet the pope."