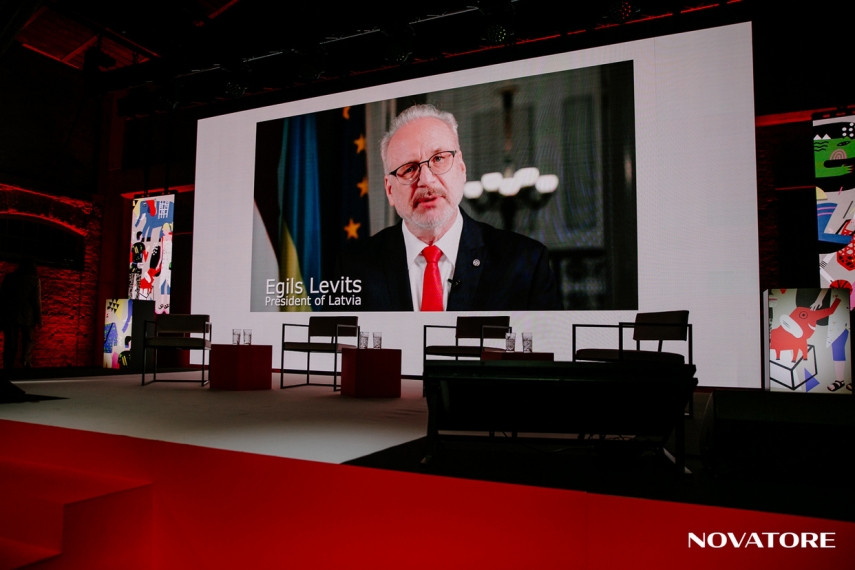 On 22 September, the international Novatore Impact Summit opened in Riga with the aim of empowering women economically. The event was opened by the co-founder of the Novatore organisation, Baiba Rubesa, and graced by video addresses from Latvian State President Egils Levits and the First Lady of Ukraine, Olena Zelenska.

In her address, Olena Zelenska admitted that she is not only pained by the sight of houses destroyed by Russian rockets, but also by bombed shopping malls, shops and cafes, which were created through hard work.

“Almost half of Ukrainian entrepreneurs are women. Under other circumstances, I would be happy to talk about the topic: what is she like as a Ukrainian woman entrepreneur in a peaceful, prosperous country? After all, before the Russian invasion, we sought to build a society of equal opportunities for all. But the war pushed us all back to questions of survival,” acknowledged Ukraine’s First Lady.

“A Ukrainian business woman is currently leading an offensive in the east - because thousands of our women took up arms after February 24. A Ukrainian business woman is retooling her shop for sewing fashionable clothes and sewing winter military uniforms. She gives the kitchen of her restaurant to volunteers who feed displaced people… Women in Ukraine are demonstrating strength and inspiration. They work to drive the economy - and fight to keep this economy Ukrainian. Professionalism has no gender, nor does leadership! I think that after our victory, Ukrainian society will reconsider the role of women - both during the war and post-war period,” said Olena Zelenska.

During the event, Latvian State President Egils Levits stressed that these are extraordinary times - we can still feel the burden of the pandemic, and global determination to tackles issues related to climates changes is long overdue, while the war waged by Russia in Ukraine is generating enormous human and economic losses for the whole world. These crises exacerbate the economic consequences of gender inequality.

“Each and every one of us can and must contribute to building a more equal society. At the highest level of the state, there must a realisation that reducing gender differences goes hand in hand with greater economic growth, commercial stability and sustainability. This must be reflected at a political level, particularly in areas that are vital to our future such as innovations, digital and green transformation,” said Egils Levits.

Equality is not a luxury good

In opening the conference, Novatore co-founder Baiba Rubesa told the audience that several international studies show that if women hold positions on a company’s board, its profits grow by 25%.

“This clearly demonstrates the need for the economic empowerment of women. Therefore our summit’s credo is - by women for everyone! Financial independence is key to the self-determination of women. Equality is not a luxury good, but the foundation of our welfare and, if we empower women economically, we all benefit. Woman not only make up half of humanity, they are also responsible for the availability of half the world’s gross domestic product and food. But despite this, in today’s global economy, women still find themselves in an unequal situation. Women must be self-sufficient, they need powerful social capital and issues of female equality need greater advocacy. Right now, with the war in Ukraine and the ongoing struggle against the pandemic, we must strengthen the vitality and fortitude of women and society in order to live in peace, security and welfare.”

At the conference, the audience of over 300 participants will be addressed by inspiring leaders from all over the world, including entrepreneurs, writers, investors, technology experts and representatives from other sectors. On the second day of the event, practical masterclasses will take place, which will help participants to master the skills required to attain their career goals, successfully manage a team, generate trust and boost ambitions, acquire financial independence and other invaluable knowledge.

You can view the full address by the Latvian State President in English here.

The full address by Ukraine’s First Lady Olena Zelenska in Ukrainian with subtitles in English is available here.

About the Novatore Impact Summit

The Novatore Impact Summit is an international conference for the economic empowerment of women that will take place in Riga on 22-23 September. The conference aims to promote the economic activity of women and facilitate gender diversity in business leadership positions. The event will bring together 50 speakers from 18 countries: influential leaders, entrepreneurs, political leaders and researchers from the entire world to educate and inspire women to achieve their career ambitions and have a greater say in the economy.

The conference is organised by Novatore, which was established in 2020 by entrepreneurs Baiba Rubesa and Dagnija Lejiņa to support women in leadership roles by providing knowledge and networking opportunities, and promoting experience sharing.