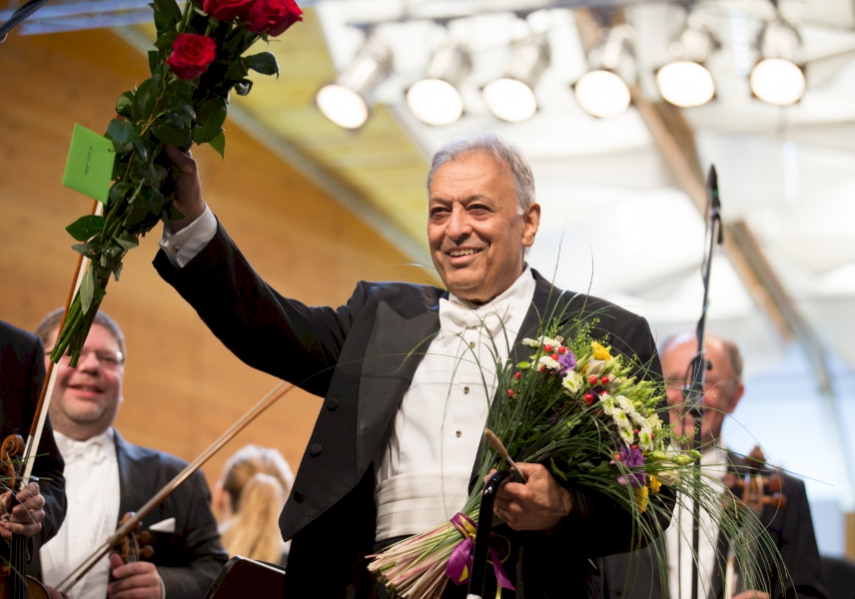 JURMALA - Throughout the performance of the Israeli Philharmonic Orchestra at Dzintari Concert Hall in the beach resort of Jurmala on August 20, it was hard not to notice a large cortege of security guards — whose sleek, elegant suits brought a whole new meaning to the term “plain clothed”.
They were there to prevent any disturbances, but ironically spent a great deal of time chattering into their earpieces and moving around during the performance of one of the world’s great orchestras.

This added to the frisson during an evening of music featuring the works of Strauss (Till Eulenspiegel’s Merry Pranks, op. 28), Schoenberg (Verklärte Nacht), and Tchaikovsky (Sixth Symphony in B minor, op 74, Pathetique).
In many parts of the world, a heavy security presence has been a necessary inconvenience to ensure that the Israeli Philharmonic Orchestra (IPO) performs at all.

Even in seaside Jurmala, highly trained, loud talking security honchos were deemed necessary as a precautionary measure. Neither the police nor the Israeli Embassy wished to comment if these guards were armed.
The troubled memories of performances in cities such as New York and London are reminders why. Both cities in the past — as well as a number of others — have witnessed heavy protests whenever the IPO comes to town.
In New York, high profile protesters — such as Alice Walker, herself a Pulitzer Prize-winning author,  and Roger Walters from Pink Floyd — called for a cancellation. It was part of an attempted cultural boycott proposed worldwide against the Israeli “apartheid state”.

Their standpoint: that as long as the Israeli state continues to occupy Arab land, continues its building of settlements, and continues the repression and killing of Palestinians, it is wrong for New York to provide a platform for Israel’s philharmonic.
It was just as tense in London, where protesters disrupted the orchestra’s concert during its BBC Proms performance. The protests resulted in the BBC cutting off the concert midway through its live broadcast. A group of musicians of The London Philharmonic  had even gone so far as stating that the IPO is but as a cultural smokescreen for Israeli human rights abuses.

But all was calmer on the Baltic coast. No world headlines from Jurmala that night, just music.
It was the IPO’s second time performing in Latvia. The orchestra was formed in 1934 by the Polish-born violin virtuoso Bronislaw Huberman, who founded the Palestine Symphony Orchestra. (Only in 1948 with the creation of the State of Israel did orchestra’s name was officially changed to the Israeli Philharmonic Orchestra.)

The present day IPO consists of both Israeli-born and trained musicians, as well as numerous Jewish musicians originating from Russia, Poland, Latvia, Ukraine and a number of other ex-communist nations.
For The Baltic Times’s intended pre-concert article on the IPO’s appearance in Latvia, I sent a number of short questions to the orchestra’s Secretary-General Avi Shoshani.

Both Shoshani and the Indian-born conductor Zubin Mehta, the orchestra’s Music Director, hold what seems to many in the music professional world like lifetime positions with the orchestra.
Shoshani has been one of the longest serving Secretary-Generals of any world orchestra, a profession which generally sees greater mobility at  senior level managerial positions.
Maestro Zubin Mehta, who was honored in 2011 with the 2,434th star on the Walk of Fame on Hollywood Boulevard in Los Angeles, is also one of longest serving conductors of any world orchestra, a title which the orchestra has designated him music director for life.

Mehta was previously Musical Advisor of the orchestra from the period 1968–77; then Music Director thereafter. Indeed, both Mehta and the orchestra  have developed a durable marriage, which has lasted 46 years, with the relationship still ongoing.
The questions directed by The Baltic Times to the Israel Philharmonic Orchestra were not answered.

After repeated calls to the orchestra’s office, an apologetic reply was forwarded, stating that The Baltic Times should understand that since the orchestra is overwhelmed with preparations for their forthcoming European Festival Tour, the orchestra can not answer questions, but that the orchestra’s Secretary-General for life, Avi Shoshani was able to issue a statement which the orchestras office deemed correct and right for the occasion of the orchestra’s appearance in Latvia.
The orchestra may have wished in large part to ignore the more direct questions among those asked. This reporter believes that art is inherently political, and questions about the technical decisions of a performance must always be accompanied by those providing its philosophical and political grounding.

In this vein, a number of the questions stray from the musical to the political, touching upon subjects such as whether any Arab-Israeli or Palestinian musician currently performs with the IPO. This was said to be a dream of Maestro Mehta, and it would be interesting to know if this had been realised.

Further questions included asking for comments about statements made by Maestro Mehta in April 2015 that “Israel has lost Europe. Now it is losing America.” Whether opportunities exist for Palestinian children to attend IPO children’s concerts alongside with Israeli children? Whether IPO musicians reach out to Palestinian musicians to share their knowledge, their skills, and their love of music for the  training Palestinian musicians? And what role can the IPO and music play in building, nurturing, and creating peace amongst Israelis and Palestinians.

The Israeli Philharmonic Orchestra however did issue the following candy floss comment.
‘’The IPO performed once in Riga and it is the second visit in Latvia and it is a wonderful opportunity for us as an orchestra, to share our love of music with the Latvian people, who share a love of music with us. Music is one of the greatest ambassadors I have found. We come to Latvia bringing this great common gift of music we share, as well as peace.’’

It was however a disappointing concert in comparison with previous times I have seen the Israeli Philharmonic on two separate occasions — the first time in Prague, and the second at the acoustically superb Musikverin in Vienna.
On this occasion in Jurmala a somewhat more frail and older looking Maestro Mehta was to approach the podium. A slower less energetic stooping Mehta slowly weaved himself between roles the musicians, and after what seemed like a tiring walk for the 80 year old Maestro,  he took up an uncommon sitting position on a stool in front of the orchestra to conduct the evening’s performance seated, not rising once during the concert.

The dry acoustics of the Dzintari Concert Hall’s tends to diminish one’s concert enjoyment. Certainly, there were beautiful surroundings: pine trees at sunset is never a horizon to complain about when listening to music. Regrettably The Great Hall did not offer the appropriate acoustical environment that should have been afforded to one of the world’s great orchestras.

The case for a new concert hall

The orchestra should have been afforded a hall with superb acoustics,  which presently neither Riga nor Jurmala have. This would have enabled this great orchestra to truly shine.
It  would have also created for the audience an experience and performance where the music would have hit you right in the gut and left you breathless, inspired and overwhelmed. This didn’t happen on the evening of August 20.
The Dzintari Concert Hall’s technical director Deniss Pilkevics stated to The Baltic Times that a feasibility study will be proposed to the Jurmala City Council to improve the whole area and public availability of The Great Hall, as, for example, toilets are currently located outside, as well as the study most urgently proposing how The Great Hall’s acoustics can be improved.

Pilkevics did acknowledge that several reconstructions in the 1990s of The Great Hall in fact spoilt the acoustics — and created too much reflection of sound above the stage. The Great Hall currently, in Pilkevics’s opinion, has ‘’no reflection spaces for sound to carry into the audience.’’
Pilkevics, along with the Director of the Dzintari Concert Hall Guntars Kirsis, and Gunta Liepina, Deputy of the Jurmala City Council, and Chairperson of the Culture Committee,  visited the United States to see Tanglewood - a permanent open-air structure and the famed summer home of the Boston Symphony Orchestra.

Pilkevics and the group had specifically gone to Tanglewood — of which the 210 acre Tanglewood estate was a gift to the Boston Symphony Orchestra — to see the fan-shaped shed (formally known as the Koussevitzky Music Shed, colloquially just called  “the Shed”) which houses some 5,100 seats, and a hall which relies only on its natural acoustics. It can also accommodate a further audience of 11,000 which are able to hear concerts seated on the lawn through the amplification of sound.

‘’The Great Hall at Dzintari is also unique in the world  As only three or four outdoor concert venues in the world are completely covered like The Great Hall,’’ said Pilkevics.
Once the feasibility study has been prepared for 2016. ‘’An architectural competition will be announced, which will not be limited to Latvia, but be international in scope,’’ said Pilkevics.
The Israel Philharmonic Orchestra’s performance of Arnold Schoenberg’s 1899 composition Verklärte Nacht (Transfigured Night), Op. 4, transposed for string orchestra and considered one of the composer’s important early works, would have indeed required a performance venue and an acoustic environment which could have offered a more intimate experience for the composition’s performance.

The works highly advanced harmonic idiom and rich chromatic language was lost in The Great Halls open space.
It further sounded as if the  musicians were struggling to get a sound out of their instruments. The intimacy which Schoenberg’s work would have required lost in Dzintari’s acoustical waste land.
This was a performance space which was once — in Soviet times — considered one of the most popular and most prominent concert venues in the Soviet Union, partly due to its parallel reputation as a relaxing spa resort.
But who was able to hear the Transfigured Night’s inverted ninth chord among the sound of a chopper on the road outside the concert hall, as it briefly stopped, revving to take off,  leaving its roaring melodic contribution  on a  transfigured composition.

The leaders of Riga’s City Hall, the Latvian Ministry of Culture, and Latvian governmental leaders ...   all seem to have their heads stuck in the sand when it comes to this issue, unable to give either the direction or  leadership on such a vital and important issue.

The debate in Riga has largely died on the Latvian capital building a new concert hall. There is presently much frustration and confusion, primarily amongst professional musicians on a matter close to their hearts .
Perhaps  professional musicians need to take things into their own hands, and stand up to make their voices heard, with an strike to send a clear message to all who will not listen nor prepared to listen. The message: That the environment where music is performed is of the highest importance. And for Riga to become a true world city and build on its respected and well earned status as a vibrant European cultural capital, a performance venue fitting of any world city is urgently needed.