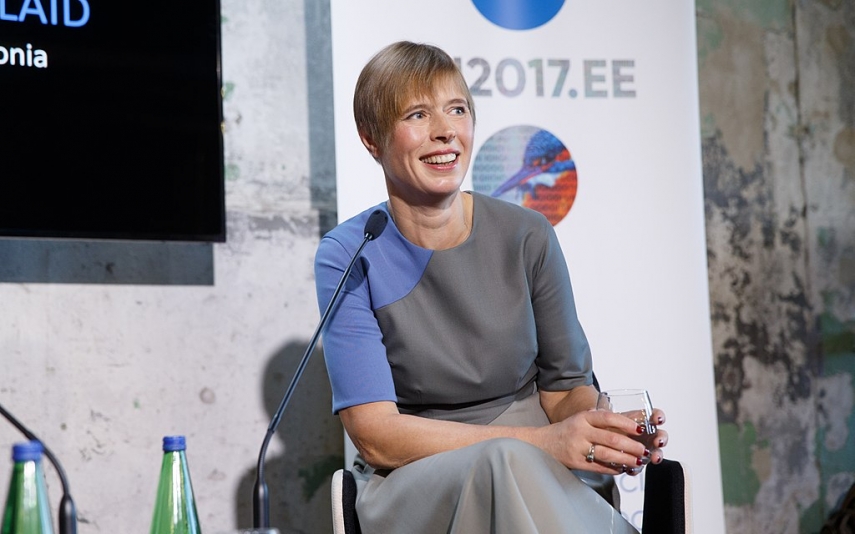 TALLINN - New Year's Eve speech of Estonian President Kersti Kaljulaid which she gave on Freedom Square in Tallinn a few minutes before midnight.

On the 1st of July of this year, something very special happened right here on Freedom Square. A spontaneous dance celebration, which went from idea to reality in just a few hours. This event was an emphatic way to enter a new century in the history of Estonian statehood. This is exactly how we will start living in the second century of Estonian independence. At light speed. No time given for last-minute adjustments.

But this new pace of life has its charm. Everybody's ideas count. Everyone's actions are a part of our society. Our entire society is the sum of our collective acts. Everyone has an equal opportunity to accomplish something great.

As to whose idea is turned into action, that depends on their initiative. As to which achievement becomes a symbol or sign of the times, this is something that will become clear in hindsight. Symbols both good and bad can trigger something that changes the pattern of our society.

In 2017, the pattern-changers were people we didn't expect. Or they changed the patterns in ways we perhaps weren't able to fear.

In our new century of independence, everyone has more independence. Anyone's dream can end up determining the future course of life in Estonia. Anyone's misfortune, worry, even mistake can be the factor that makes you and me take action to make this a better society. Nowadays, we are ever less reliant on government institutions when it comes to bettering our society. Increasingly, what we need from these institutions is simply their support.

For example, it took the Tallinn City Office no time at all to realize the significance of the dance celebration on Freedom Square. As seamless society grows and becomes stronger, the state is increasingly a supporter, an enabler in the positive sense of the word.

That doesn't mean the state's role in our lives is shrinking, only that it is changing into something different. Security, healthcare, education, coping with great misfortunes in life – the state provides all of this according to its abilities, to the extent that we as taxpayers approve. If we want to go beyond that in coming to someone's rescue or preserving something – or just to improve our spirits – we can. We're allowed to. But, as the organizers of the dance celebration on Freedom Square emphasized implicitly with every step – it won't happen through divisiveness and opposition. The spontaneous dance festival wasn't a protest against the decision to cancel the official dance performance, made in the interests of the well-being of smaller children and rhythmic gymnasts not dressed properly for the weather. It was the contribution of the young people of Estonia to ensuring that summer 2017 dance festival experience, too, would be better than the circumstances permitted.

It's something that happens more and more frequently: we come together for a moment, in response to someone's call or cry for help, and we do something really important. And this is the right thing. This is the way it should work. An action that resonates with the multitudes doesn't always need to be planned and managed. It just happens.

I would like to thank everyone who has contributed time, energy, money and the power of their spirit to make wonderful things happen this year. Thanks to those who have helped illuminate the darker side of life, those who relived painful experiences publicly again to prevent the next victims from coming up against a wall in the hour of their greatest need for support from the community.

It's only in this way, by talking about our concerns honestly and forthrightly, that we become a healthier society. After all, someone who has reached the age of 100 needs to start getting serious about taking care of their health.

On this New Year's Eve, I think we can be of good cheer. For a little while at least, we can set aside our concerns for Estonia's welfare. The Estonian Presidency of the Council of the European Union is about to end. During the last six months, we experienced directly what responsibility in the international arena means, and we also felt the warm support and discrete help of our partners when we needed it. A NATO battalion arrived in Estonia to do the work that NATO has done, always successfully, for 70 years now. NATO safeguards peace; NATO does not pose a threat to anyone, not even to countries who attempt to paint it as a threat.

On this New Year's Eve, we could instead allow ourselves a spirit of impatient suspense. I don't know about you, but I would like to get some kind of sense of what the eve of Estonia's 200th anniversary will be like. What will the president speak of on this square on the 31st of December in the year 2117? As we provide content for today's newspaper columns, forums and podium speeches, we don't know the answer. I wouldn't want to divine the future of the young people of Estonia only from our thoughts. I only know that you want to be happy. But how do you intend to do that? Please speak to us, as we make these decisions in the present. Put your thoughts down in writing. Here and now: Write to Estonia!

The local elections of 2017 did not really succeed in striking a chord with you. Yet you've shown in other ways that you care about our Estonia's future – for example, the Youth Manifesto drafted for the 100th anniversary of the Provisional Assembly. Your commitment is also shown by your actions – as sea rescuers, volunteer youth workers, members of the youth organizations of the Defence League, local history researchers and community activists. Be sure to let your voice be heard precisely in this year, with the first century behind us –a far-from-happy century that ended on a happy note. I believe that this centenary year shouldn't be mainly about looking back.

And so. We are about to step into a new year. But there is still a moment before it happens. Look around you one last time: maybe there's someone who doesn't see a reason to celebrate this moment because hope seems in short supply? But we don't pass people by, abandoning those who can't go on any longer. Take a moment to remember the ones for whom the old year was painful, for whom the New Year may seem empty as a result, because pain is not so easily forgotten.