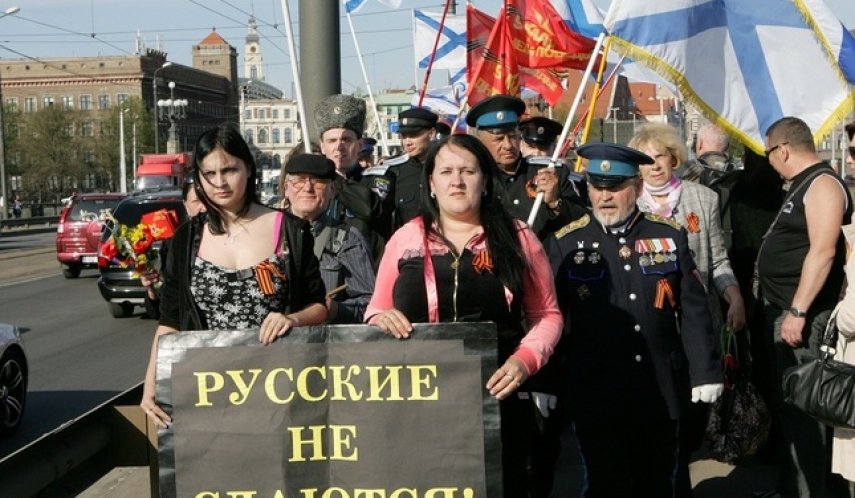 An appeal to the Russian Duma by the leader of a non-citizens' NGO in Latvia is the tip of the iceberg of Moscow’s increasing involvement with ethnic Russians in that Baltic republic, a worrisome development in the wake of Vladimir Putin’s “hybrid war” in Ukraine but one that may not work given divisions within that community.

Many ethnic Russians have become citizens of Latvia over the last 20 years, and even those who haven’t are overwhelmingly loyal to Riga, viewing Latvia’s European choice as beneficial to themselves and their children. (See “Ethnic Russians in Baltic Countries ‘Love Russia but Don’t Consider It Their Home,’ New Study Finds”)

Nonetheless, Moscow officials, together with a few ethnic Russian activists in Latvia, have been seeking to exacerbate ethnic tensions both in Latvia as a whole and in Latgale in a transparent effort to set the stage for a Kremlin move against Latvia. (See “Moscow Using Russian Organizations to Destabilize Latvia, Riga Officials Say”.

Now, this Russian government effort has assumed an even more official and thus threatening form. Yesterday, the Russian State Duma held a roundtable on the problems of non-citizens in Latvia and Estonia, at which Alexander Gaponenko, head of the Latvian NGO “Parliament of the Unrepresented” asked for Moscow’s help.(tass.ru/en/world/785119).

“We need help in the fight” against Riga, he said. “We can make noise and shout, but we need judicial assistance,” Gaponenko said, and addressing Aleksey Pushkov, chairman of the Duma’s Foreign Affairs Committee, he added “we would accept your help with pleasure.” Gaponenko’s colleague, Elizaveta Krivtsova, said that “our main goal is that the institute of mass non-citizenship in Latvia should be eliminated by any legal means.”

The Russian government apparently has decided to focus on the non-citizens, not only because it is convinced that among them are its most likely supporters but also because the existence of that category of people is not widely understood or approved of among many in the West.

Moscow’s arguments to the contrary notwithstanding, Estonia, Latvia and Lithuania were occupied countries between 1940 and 1991, and under international law, they were not obligated to extend automatic citizenship to those moved in by the occupier, in that case the Soviet Union, during that period.

Were international law indifferent to this issue, any occupier could simply move in enough of its own people to transform the demographic and hence political realities on the ground and then invoke “democratic” principles to insist that its occupation was entirely legitimate and must be respected.

What the three Baltic countries have done is to make it possible for those moved in by the Soviet occupation to become citizens with varying degrees of ease, guaranteed their rights as a community including the right to travel abroad, and allowed them to organize and press their case. Not surprisingly, many “non-citizens” are not the angry movement Moscow would like.

And that presents Moscow with a real problem, one addressed today by Viktor Gushchin, coordinator of the pro-Russian Council of Public Organizations of Latvia, in an article entitled “Is the Russian Community of Latvia Capable of Overcoming Its Ideological Crisis?”

Many ethnic Russians in Latvia actively supported that country’s recovery of its independence, and they assumed that the post-Soviet government in Riga would extend citizenship to all residents. But that did not happen because a centerpiece of Latvia’s national existence is that it had been occupied and was never just another Soviet republic.

Many Russian speakers, a broader category than non-citizens, have opposed the closing of Russian-language schools and the increasing use of Latvian in the country’s public space, seeing it as a threat to their community, Gushchin continues.  But the two overlapping groups, he says, have had little success against Riga’s policies.

Since the 2012 referendum on language, he says, “no new idea which would unite the Russian-language community has been advanced.” Consequently, one can “today speak about a certain ideological crisis in the Russian democratic movement of Latvia” and even of a lack of unity of understanding among its members of what is taking place.

According to Gushchin, “there is no unity in the assessment of the political processes in the country or of the political parties which pretend to express the opinion of the Russian language community;” and there is a sense among any that “the interests of the organizations of Russian compatriots” and “the interests of the Russian language community as a whole are not one and the same thing.”

Indeed, he says, “there is an obvious paradox.”  Most organizations of Russian compatriots back the Russian Union of Latvia, despite its inability to elect anyone nationally or locally, while the Accord Democratic Party, which doesn’t do much to support Russian rights, nonetheless gets the most votes from Russian speakers.

Gushchin identifies three sources of what he calls “the ideological crisis of the Russian language community of Latvia.” First, Russian organizations have not been successful in representing the interests of Russian speakers, thus leading to apathy and disorganization in their ranks. Instead, highly dissatisfied Russians in Latvia are choosing to emigrate.

Second, “both the Russian language community and the political parties which represent its interests” are not “sound” on the issue of whether Latvia was occupied or not.  Many accept the Latvian version of reality rather than the Russian one, even though Riga continues to build “an ethnocratic and neo-Nazi state.”

And third, these problems in the Russian language community of Latvia have been exacerbated by the policies of the West and those of Russia as well, Gushchin says. The West has failed to demand that Latvia live according to democratic principles, while Moscow has said the rights things but failed to bring pressure to bear.

Even today, the Russian activist says, Moscow has not fully escaped from the foreign policies of the Yeltsin presidency and gone no further than making declarations.  “Such an approach not only essentially weakens the human rights activity” of Russian organizations in Latvia “but at the same time strengthens the positions of the ruling nationalist elite."

It is possible to overcome this situation, Gushchin insists, and he suggests that Moscow should exploit what he says is widespread support for Russia’s annexation of Crimea and military moves in the Donbas to unite the Russian speakers of Latvia and to put pressure on Riga to treat them correctly.

Moscow needs to support the Russian speakers of Latvia in this way, the activist continues, because if they come together, they can be sure that the Riga government will do everything to oppose “any consolidation of Russians of Latvia, since even the smallest move toward the democratization of the state will represent a mortal threat” to the Latvian regime.