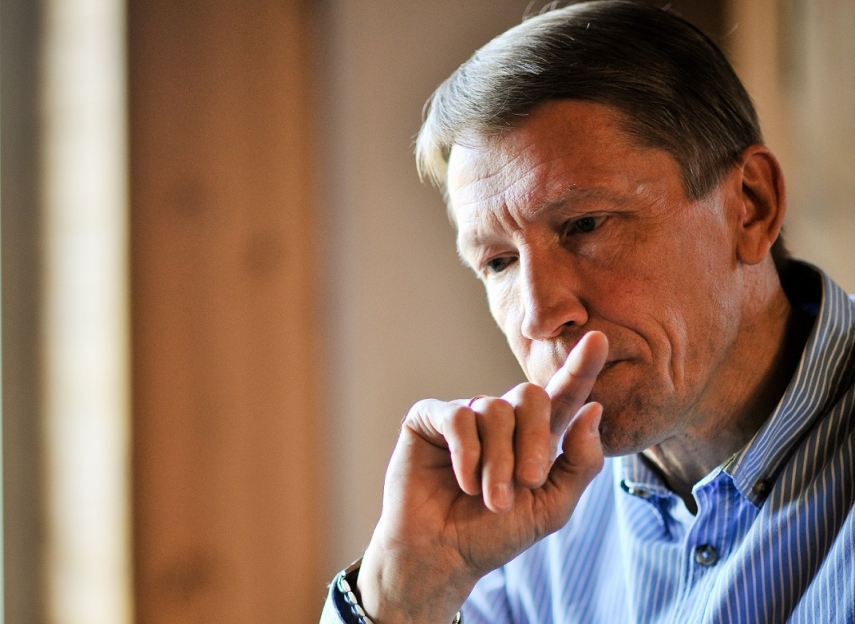 Latvia is experiencing a heated public debate about spending state budget resources for the mindfulness and meditation training of top state officials. It would sound odd in Germany, Denmark or Sweden where self-awareness and mindfulness lectures for executives is perceived as a normal and much needed practice, says theologian Juris Rubenis, who has recently given up his post as a highly popular Lutheran pastor to become co-founder of the Integral Education Institute, the one that delivered the highly publicized lectures.

The training given to 39 high-ranking state officials has received both positive and negative feedback and a clash of opinions among the country’s public and media.

The lectures were part of a five-year program for the education of top rank state officials drawn up by the State Chancellery. In 2018 a contract was signed with two companies, SIA Totari known as the Insight, Rebirth and Culture Center Miervidi, and SIA Integral Education Institute – I3. The training worth a total of 6000 euros was attended by 39 state officials.

The lectures at Totari were conducted by Sandis Kristars Duselis (Mg.psych.), Evija Apine (Mg.soc.d., supervisor), Indra Majore-Dusele (Mg.psych., Mg.sc.sal.). It consisted of eight lectures, each two hours long, making up a total of 16 academic hours. The course offered by the Integral Education Institute – I3 was delivered by dr. Juris Rubenis, teacher of contemplation/meditation, the program director at the Integral Education Institute. The program consisted of ten lectures, each four hours long, a total of 40 hours.

Rubenis points at a paradox

Asked by the leading news website Delfi, what is his opinion about the public uproar caused by his lectures to top state officials, Rubenis agrees that contradictory discussions are triggered by all issues related to investment into education and personal development of Latvian state officials.

"We always face diametrically opposite views. I’d like to focus on the paradox that people often complain about inefficiency of state institutions, while at the same time are dissatisfied when any steps are taken to make it more effective," says Rubenis.

He points out that the majority of MBA programs in Europe have mindfulness lectures in their curricula. The motives are not obscure assumptions but serious research showing that mindfulness is a strong instrument and practical skill helping executives remain balanced and avoid burning out in the highly stressful environment of the modern world.

Rubenis emphasizes that the people in question are not only high-ranking state officials but also countless executives who study mindfulness for many years. In his words, the discussion whether this training of mindfulness is actually necessary would be difficult to understand in Germany, Denmark, Sweden where teaching of mindfulness to executives is an absolutely acceptable and normal practice.

"I think in a few years we’ll also wonder why there was this heated debate about such an absolutely self-evident matter,” says Rubenis.

How to get a state contract

Rubenis reveals to the news website Delfi that the Integral Education Institute received a proposal in writing from the State Chancellery’s official Liva Liepina offering to participate in a tender on conducting a mindfulness training to state officials. He understood that a similar letter was sent to several institutions that teach mindfulness practices in Latvia. The institute represented by Rubenis filled in the proposal form and sent it back to the State Chancellery.

The institute had already completed its autumn schedule of workshops but it was still decided to answer the call of the State Chancellery because “teaching of mindfulness is one of the key topics of our institute and we see the enormous importance of these skills in the life of every single executive,” Rubenis adds.

The State Chancellery explains the necessity of such training with the worldwide practice and the stressful environment plus the risks of burning out faced by high-ranking officials.

"An executive who has learned the basic principles of mindfulness will be motivated to introduce their own development and health promotion programs, as well as change the internal culture at their own institutions so the biggest winners will be clients of state institutions. The practice of mindfulness is at present a broadly studied method with a proven efficiency in raising involvement and output of the personnel," the State Chancellery is repeatedly stressing its point.

The State Chancellery told the news website Delfi that the goal of mindfulness training to top state officials was to let them acquaint themselves with the basic principles of the mindfulness practice and introduce methods of sustainable leadership.

The Chancellery’s goal was to make state personnel more efficient, creative, capable of coping with big workloads, acquire better leadership skills and reduce burn-out syndromes. Similar activities are important given that the improvement of state administration is impossible without investment into human resources.

"For the Latvian state administration to become an attractive employer and attract the best professionals, similar investments into strategic development of human resources should be assigned in an even broader scale. The program is currently financed from the European Union’s funding as a pilot project. Similar programs are also carried out in neighboring Estonia,” said the State Chancellery.

The training was also attended by the head of the Health State Inspection Indra Dreika, the head of the State Railway Technical Inspection Andris Dunskis, representative of the State Police Renate Fila-Roke, the Deputy Director General of the Environmental Protection Administration, the head of the state doctor’s commission at the Health and Working Ability Excertise Jurs Gaikis, deputies of the State Chancellery Director Inese Gailite and Baiba Medvecka, the State Forensic Center’s Director Egils Harasimjuks, the Medicine State Agency’s Director Svens Henkuzens, as well as Fotreign Trade Promotion Department Director Aija Jaunzeme at the Latvian Investment and Development Agency.

The State Chancellery points out that it has collected the feedback and evaluation of the training. "The training was praised by the participants who rated it as a valuable contribution to their education,” it said in a statement.

The decision on continuing the mindfulness training is pending

The State Chancellery has not yet drawn up concrete plans for mindfulness courses by Rubenis or other experts in 2019. "This exact training is completed and we’ll make an assessment on whether to continue similar courses," according to representatives of the institution.

On a yearly basis the Chancellery offers activities on different topics, including lectures on specific themes, exchange of experience and other events. This year’s main topic concerns innovation and experiments but other years have different priorities.

Daniels Pavluts who represents the political party Attīstībai/Par! (For Development) has graduated from the US Harvard University with a master’s degree in public administration (MPA) specializing in management has himself worked as a trainer and consultant in similar courses for executives and state officials. Commenting on the State Chancellery’s decision to organize mindfulness training for high-ranking state officials, Pavluts said he was pleased and happy to hear about this move.

He also admits that “feels deeply disappointed about all this uproar” concerning the training conducted by Rubenis. Pavluts says he respects Rubenis very much and believes the praised theologian has much to tell officials that can help them to become wiser people and better professionals. For this reason Pavluts does not see a problem in the fact that such training is organized and officials attend them because he does not understand why the state should be prevented from paying for the professional and personal development of its top employees as it is done by all reasonable employers.

Pavluts says that managers (and every one of us is some kind of a manager in one’s life) face their specific issues and difficulties. A manager must be a more mature person, “a manager is obliged to absorb emotions, take the punch”, make decisions in complicated circumstances. Therefore managers need personal development and balance training and it is clearly defined at leadership courses everywhere in the world. “The era of psychopathic executives is over now, the world needs emphatic leaders who control their own behavior rather than subject their employees to blind obedience,” Pavluts told Delfi.

Moreover the cost of similar courses for top managers conducted by highly professional experts is really high in the world compared to the low price bargained by the State Chancellery, he added.

According to information published in the website of the Integral Education Institute – i3, for example, the cost of a two-day workshop for executives An introduction to Theory U. How to get to the place within you where you have not yet been? by Juris Rubenis and Uldis Pilens is 726 euros per person, while one workshop conducted by Pilens for executives and one workshop by Rubenis What does a holistic human growth mean? is 363 euros.

Pavluts adds that big and complex issues cannot be solved by attending just one workshop just like young parents’ classes do not guarantee that you will raise a successful person yet it allows to start thinking about important questions. Moreover it can bring along serious consequences if, for example, a key state official is unable to control his or hers behavior when complicated reforms are on the agenda.

In his opinion further education and training is important in every field of activity and any competent and qualified lecturer is of high value, not only Juris Rubenis. He also believes the State Chancellery has seriously evaluated and analyzed educational needs of top officials.

Psychotherapist supervisor Ansis Jurgis Stabingis, whom the largest Latvian daily Latvijas Avize praised as an authority among Latvian mindfulness-related specialists, told the newspaper on January 3 that this practice has long been known and applied by Eastern religious tradition like Buddhism, Daoism, Qigong. It is a universal psychological method not linked to any particular religion or philosophy. Mindfulness can be developed by the practice of awareness. The most easily accessible form is meditation implying work with one’s mind, concentration and perception.

Stabingis told the newspaper that mindfulness and awareness practices are important for all people but especially significant to those whose actions influence other persons, i.e., mindfulness of state administration managers is of high priority for the sake of all citizens of a country. "No one is more unwelcome than an insensitive, unaware person in a power position. The practice of mindfulness allows a man to get to know himself or herself better and understand other people based on this experience. In the case of executives it means to know oneself, one’s motivation, one’s fear and one’s limits. By knowing oneself a person also learns to know his or hers subordinates," Stabingis explained.