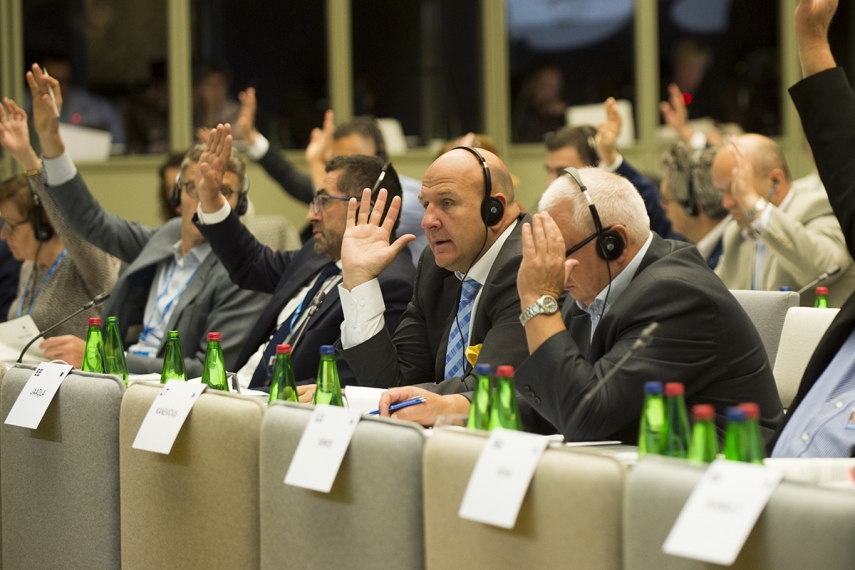 The Commission for Environment, Energy and Climate Change (ENVE) of the European Committee of the Regions met in Tallinn today under the Estonian Presidency of the Council of the European Union. The Committee is EU’s assembly of cities and regions. Its mandate is to contribute to EU policy-making and legislation through ‘opinions’, which gather recommendations based on the competencies and expertise local and regional authorities have in a wide range of policy areas. The topics of environment and climate change were on top of the agenda today in the Kultuurikatel, Tallinn’s creative hub.

The ENVE Commission passed an opinion on the ‘Environmental Implementation Review’ (EIR), a tool to improve the implementation of environmental law and policy across the European Union by addressing the causes of implementation gaps and by finding concrete solutions to urgent issues. The rapporteur is Andrew Cooper, member of the Kirklees Council in the UK. The opinion recommends new policy areas to be added to the EIR such as chemicals, industrial emissions and action on climate change. Councillor Andrew Cooper said: “I’m delighted that the opinion was passed with no CoR members opposing it on the final vote. I am particularly pleased that the concept of Locally Determined Contributions (LDCs) and Regionally Determined Contributions (RDCs) has been accepted by the ENVE Commission.”

The opinion requests that  ‘the European Commission works with relevant national authorities, the European Committee of the Regions, the EU Covenant of Mayors, the Global Covenant of Mayors for Climate and Energy and ICLEI to develop the concept and methodologies for introducing Local and Regionally Determined Contributions, thereby contributing towards climate change targets agreed under the COP21 Paris Climate Agreement.’

LDCs and RDCs are a way of filling the emissions reduction gap that needs to be bridged if we are to achieve the targets set in Paris at COP21 of limiting global temperature rises to no more than 1.5% degrees above pre industrial levels. These LDCs and RDCs would form the basis of targets and delivery plans for Local and Regional Governments to lead on the reduction of emissions in their own areas. “What is really exciting about the ENVE Commission passing this opinion is that it could form the basis for a template for reporting local and regional action across the globe, giving the opportunity for partnerships with organisations like the US Conference of Mayors who are opposing President Trump’s decision to pull out of the obligations of the COP21 Paris Climate Agreement” said Councillor Cooper. The opinion, as adopted today in Tallinn, will be voted by all members of the European Committee of the Regions during the October plenary session in Brussels.

On climate change, the European Committee of the Regions has discussed a working paper by rapporteur Marco Dus, member of the Vittorio Veneto Municipal Council in the Province of Treviso, Italy. Ahead of COP23, UN’s climate talks to take place in November, cities and regions are now focusing on climate finance. The objective is to speed up financial flows, simplifying access to existing funding schemes and raising the convergence between climate action and other main EU policies such as ‘cohesion’ or the Common Agriculture Policy.

The other two topics on the agenda today were the 'Space Strategy for Europe' by Andres Jaadla (EE/ALDE) from the Rakvere city council and the role of waste-to-energy in the circular economy by rapporteur Kata Tűttö (HU/PES), from Budapest.