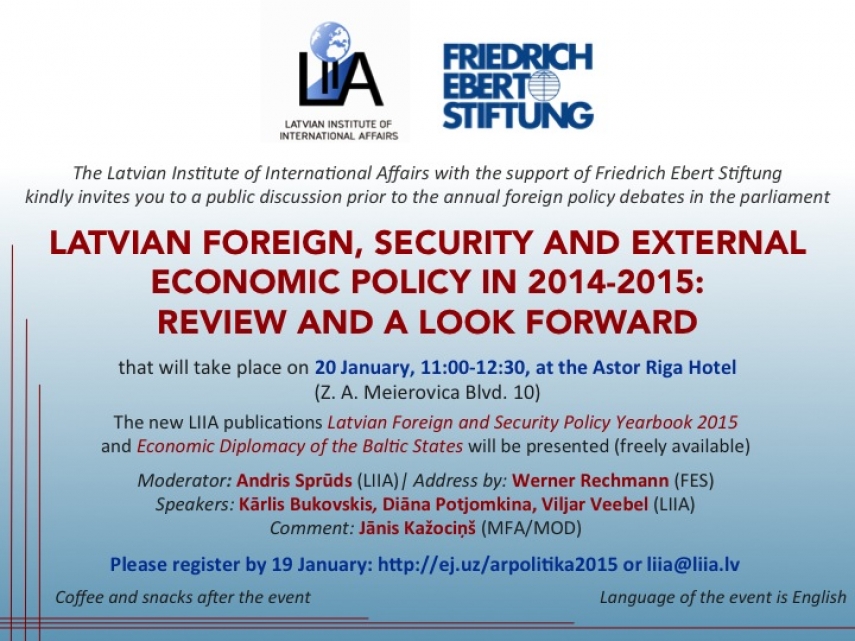 On January 20 at 11:00, prior to the annual foreign policy debates in the Parliament, the Latvian Institute of International Affairs (LIIA) with the support of Friedrich Ebert Stiftung (FES) organizes a public discussion “Latvian Foreign, Security and External Economic Policy in 2014-2015: Review and a Look Forward”. The new publications of the LIIA  Latvian Foreign and Security Policy Yearbook 2015 and Economic Diplomacy of the Baltic States will be presented at the event.

The LIIA aims to provide an independent assessment of Latvia’s external relations in 2014 as well as a perspective and recommendations for 2015. The discussion will feature Kārlis Bukovskis, Diāna Potjomkina and Viljar Veebel, and will be moderated by Andris Sprūds (all from the LIIA). Additional comments on security issues will be offered by Jānis Kažociņš (Ministry of Foreign Affairs / Ministry of Defense). The event will also be addressed by Werner Rechmann (Coordinator, FES Baltic). The venue is Astor Riga Hotel (Z. A. Meierovica Blvd. 10).

LIIA annually reviews Latvia’s foreign and security policy in the form of Latvian Foreign and Security Policy Yearbook. The aim of the Yearbook is to enhance the understanding of Latvia’s policies, as well as opportunities and concerns for 2015. This time, particular focus has been put on the Latvian presidency of the Council of the European Union, where the Eastern Partnership Summit is one of the key events. The cooperation with Central Asia is also high on the agenda during the presidency. At the same time, tensions in the context of Ukrainian crisis remain a major policy and security concern in 2015.

The other publication, Economic Diplomacy of the Baltic States, deals with contemporary issues of the promotion of economic interests in the region. The small size and inexperience of public institutions and businesses has been identified as the main problem, which has to be overcome, in order to compete with more developed states and regions. Both publications will be freely available at the presentation and on LIIA website; these have also been sponsored by FES.