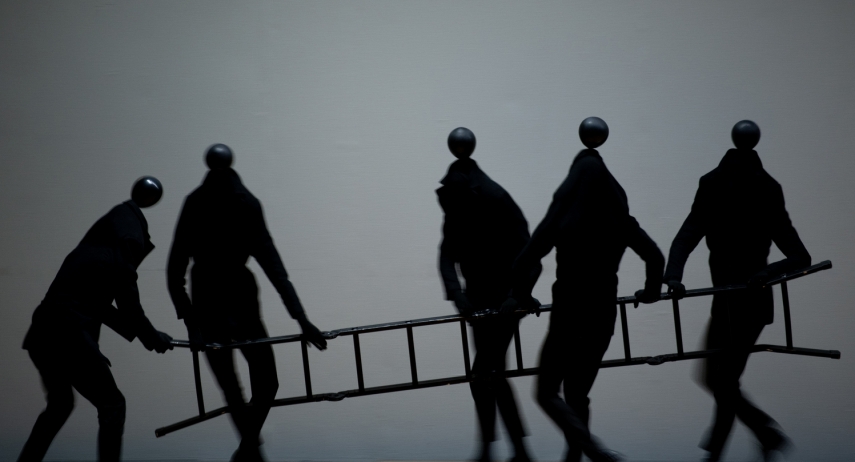 Lithuania will soon welcome Dimitris Papaioannou, the genius of performing arts and one of the most significant creators in Europe and the world. On 25 and 26 of March 2022, his most recent dance performance Transverse Orientation will be introduced in Vilnius by New Baltic Dance festival in cooperation with the Lithuanian National Opera and Ballet Theatre. This exclusive experience of performing arts is a significant event not only for the Lithuanian audience; this is going to be the only performance in the Baltic countries, welcoming the fans of dance art from the entire region.

“Dimitris Papaioannou is undoubtedly a performing arts master on the global scale. He is able to create pieces ranging from large-scale performances which astonish hundreds of thousands of people in sports arenas, to dance performances, stirring competition among international festivals and the most important theatres around the world, while the most faithful fans fly to other continents to see his productions. After four years of negotiations, the dream to welcome this creator in Lithuania is becoming reality. Transverse Orientation is a top calibre masterpiece of performing arts to be seen by everyone,” claims Gintarė Masteikaitė, head of New Baltic Dance.

The New York Times dance critic Roslyn Sulcas calls this new production by Dimitris Papaioannou “a long act of artistic magic created before our eyes.” Having just premiered last summer, this work received praise and impressive epithets from art critics and reviewers from other countries as well.

Transverse Orientation means “keeping a fixed angle on a distant source of light for orientation.” A true master of visual spectacle, the Greek artist explores existential themes, mining mythology and art history to conjure vivid and often humorous imagery. Taking inspiration from the natural behaviour of moths to seek light, Transverse Orientation follows the human compulsion to find meaning on the journey of life.

A new work by Dimitris Papaioannou is an important event not only for the audience. Numerous performers dream of joining the team of this artist and experience his creative process. 500 dancers and performers from all over the world auditioned in the spring of 2019 for this premiere. The selected ones started rehearsals in January 2020. Even though the rehearsals had to be stopped due to the pandemic in March of the same year, Transverse Orientation was introduced to the world in June 2021, Lyon Dance Biennial in France. During the tour, it will visit over 30 cities, including Vilnius.

“We are glad to have a chance to see a performance Transverse Orientation by Dimitris Papaioannou, one of the most distinguished and interesting choreographers from around the world, and his group, on the stage of the Lithuanian National Opera and Ballet Theatre. I have no doubt that this performance will interest our audience and offer wonderful moments for the fans of dance. He is a highly innovative choreographer whose works are based on the ancient, fundamental myths of his native Greece, from which the entire European culture and philosophy have originated, and who creates very meaningful and mesmerising events. It is amazing that the audience in Lithuania can see it as well,” says Jonas Sakalauskas, general manager of the Lithuanian National Opera and Ballet Theatre.

The genius of performing arts from Greece

Born in Athens in 1964, Dimitris Papaioannou gained early recognition as a painter and comics artist. In 1986, he formed Edafos Dance Theatre, which originated in the underground scene, and later challenged perceptions and gained an expanding number of dedicated followers and set its indelible stamp on the arts scene in Greece.  Papaioannou became widely known in 2004, as the creator of the Opening and Closing Ceremonies of the ATHENS 2004 Olympic Games.

Papaioannou’s productions range from mass spectacles with thousands of performers, to intimate pieces, and have appeared in a wide variety of venues, from his famous underground squat theatre in Athens, to the ancient theatre in Epidaurus, and from Olympic stadiums to the great theatre stages around the word.