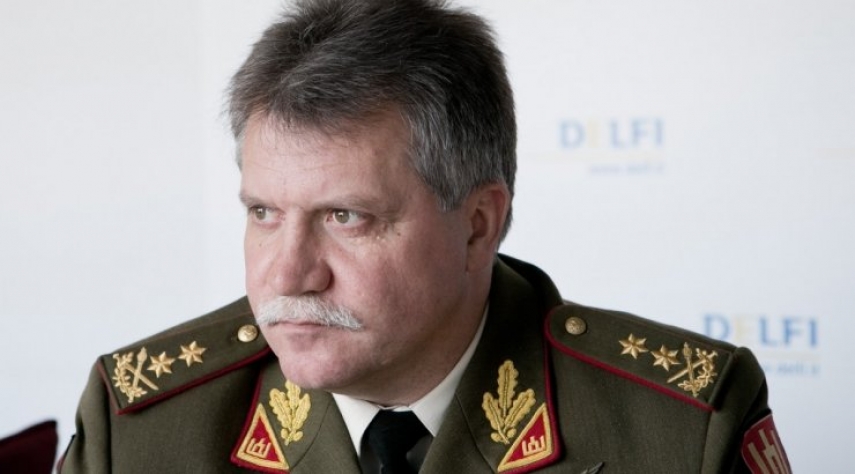 As the Seimas (the Lithuanian Parliament) considers the issue of whether conscription should be reintroduced for 19-26-year-olds, the country's Chief of Defence, Major General Jonas Vytautas Zukas, has said that Lithuania has learned five lessons from the conflict in Ukraine.

According to Zukas, the first lesson is related to hybrid warfare. The situation in Ukraine has demonstrated that unconventional threats should be tackled instantly, using suitable military measures, even if martial law has not yet been imposed. The Seimas adopted the Statute on the Use of the Armed Force on 16 December 2014. This means that use of the military is now possible in peacetime when responding to unconventional threats that differ from armed aggression: for example in cases of provocation, attacks by armed groups, armed people crossing the state border etc.

The Chief of Defence added that national rapid reaction forces have been formed in order to respond to the aforementioned threats: two battalion-sized battle groups with air, special operations forces and logistics support elements assigned to them. They have been on duty since November 2014, and their response time is between two and 24 hours.

The second thing that the Ukrainian crisis has caused Lithuania to realise, according to Zukas, was that interaction between a country's power structures is important in cases of hybrid conflict. As a result, the military now cooperates increasingly closely with the Ministry of the Interior, the Police Department, the State Border Guard Service, the Fire and Rescue Department, the Public Security Service and the VIP Protection Department. The institutions are exchanging intelligence information and training together while the legal basis and activity procedures are being developed.

The third lesson of the conflict in Ukraine is the necessity of modernisation. Zukas says that armament and military equipment has to be constantly modernised in order to ensure that the Armed Forces remain at an adequate readiness level. He says it should be focused on enhancing its intelligence, anti-tank, air-defence and fire support capabilities. However, this is determined by funding. Zukas says that Lithuania's defence funding has returned to the level that it was in 2008, but it is still far below the two percent of GDP required by NATO. According to the Chief of Defence, decisions about armament purchases take into account current priorities. For example, Lithuania has purchased FN SCAR marksman rifles and GROM portable air-defence systems. It also plans to acquire anti-tank weapons, self propelled artillery, infantry fighting vehicles, to modernise mortars, etc.

The fourth lesson is an increased understanding of how important information war is. The major general maintains that success in the information space plays an important role in an armed conflict. The armed forces and the media have to ensure that society has access to objective information. Capabilities are needed to ensure information and cyber-security, strategic communication and anti-propaganda activities. Lithuania has advanced in this area by founding the National Cyber Security Centre which will be responsible for monitoring and managing highly significant information infrastructure and cyber incidents involving information resources. It is also responsible for planning related to information infrastructure. In addition, the Strategic Communication Department of the Ministry of National Defence monitors and analyses the information space, providing assessment and proposals for how to respond. The Riflemen's Union and the Non-Kinetic Operations Company of the Volunteer Forces are actively involved in the fight in the information space, as well as representatives of the media and those sympathetic to the armed forces.

The fifth lesson learned, according to Zukas, is that the society has to be prepared to act if there is a war. In early 2015 the Ministry of National Defence introduced a publication entitled "What We Must Know to Prepare for Extreme Situations and War". Zukas says that a joint mobilisation and civic resistance system is being developed. Public-spiritedness and patriotism are currently being promoted, and information about the Lithuanian armed forces and opportunities to undergo military training is also being advertised.