Letter of love, or of resignation? 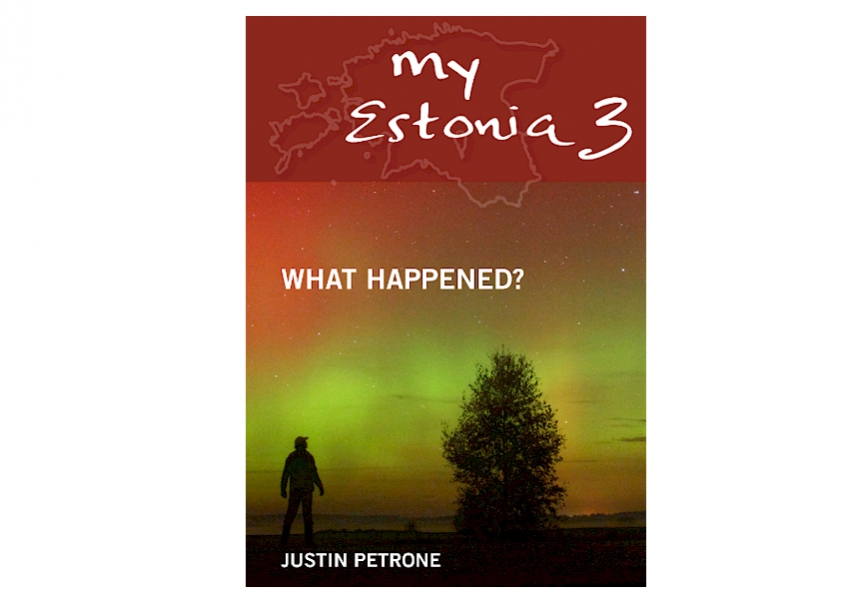 A review of “My Estonia 3: What Happened?” By Justin Petrone, published by Petrone Print.

TALLINN - There was a moment at the end of Justin Petrone’s latest in the “My Estonia” series when I asked the question in the subheading: what happened? Perhaps reading Petrone’s book is more difficult when a foreigner has, himself, been part of Estonia for a number of years. However when compared to the first two volumes, this new memoir feels uncertain of itself.

I loved the vivid descriptions of Estonia and its people at the heart of the original My Estonia. I read that book, and its more domesticated follow-up, My Estonia 2 (which details Petrone’s early career as a Baltic Times writer, his alliances with the international community in Tallinn, and the birth of Marta, his and his wife, Epp’s first daughter) as a fascinated outsider. Estonia appeared as beautiful as it did pure, a Nordic outpost full of mythology and wonder. I read My Estonia 3 having stepped into the soup, first as a Skype employee in Tallinn, then as a blogger, then as a reporter.

Many people feel an element of themselves reflected back when reading a book. That’s why people keep returning to the works of favourite authors; whether they admit it to themselves or not, they find something likeable in the characters, or they feel an empathy in the author’s style. In My Estonia 3, I got the curious feeling of my own experiences being reflected back at me. There is the first visit to the Green House Cafe in rustic Viljandi, the smell of its imported, sensationally-good coffee catching the nose through its description on the page. There is also Petrone’s encounters with the Estonian academic Kadri Liik, whose seriousness, intellect and elegance are as true in real life as they are on the page, and with Edward Lucas, whose word on Estonia has become seen on the global stage as gold. In these passages, about Petrone’s search for a role for himself in the world, as he moved home with his young family and took on all kinds of involving work, the richness of the picture being painted is matched only by its earnestness.

In other moments, however, My Estonia 3 feels like a book that is trying too hard to fall back in love with its setting. For example, the buffet lunch (admittedly excellent) at the annual Lennart Meri Conference was described thus: “Oh, those cuts of savoury lamb so heavenly tender, seasoned with rosemary. Jugs of delicious coffee, brewed dark and strong, to keep the exciting discussions going.” There is, on the positive side, an echo in his writing of my own feeling of being a gatecrasher at the conference, which gave me a smile of recognition.

The Estonian Traditional Music Centre in Viljandi is “a beating, pulsating living muscle built out of bloody red bricks.” I visited the hilltop artistic and creative venue and was impressed by the beautiful panorama from the window, but this metaphor made me do a double-take. It’s an extraordinary facility - I just sometimes wish that Petrone, a journalist originally, were a little less florid in his depiction of place.

The difficulty at the heart of My Estonia 3 is the lack of a central point of adversity for the characters to overcome - this can make the book seem at times like a series of fireside anecdotes (literally, in the case of an informative chapter about wood-fired heating). This is something brought up in the book through the voice of Vello Vikerkaar, the Estonian-Canadian blogger and columnist who sometimes seems to style himself as the acerbic oil to Petrone’s water. Petrone details how Vikerkaar apparently upbraided the young author for the way the author’s voice, in the first book, seemed to be almost entirely subservient to Epp. “I think you should make your character smarter than you do,” Vikerkaar advises.

In My Estonia 3, Justin tells Epp he is feeling low because of a letter from home, to which Epp unsympathetically responds, “you need to live your own life, not someone else’s.” There is no exploration of the irony of this statement, nor does the reader get a chance to hear Justin giving his side in return as part of what would have felt like a naturalistic dialogue, and which would have fitted perfectly into the entertaining and realistic to-and-fro of My Estonia 1’s discussions.
All too often some genuinely interesting discussions about key changes in Estonian politics and society are used as springboards to charming, but less-interesting, vignettes about intriguing personalities Petrone has met. Most times, Petrone gets away with this whimsical, magical-realist style, by grounding the book in the life of the author and his family, perhaps taking inspiration from Peter Mayle’s books about Provence, or Chris Stewart’s about Andalucia.

There is one occasion when, unfortunately, the whimsy grates so badly that, as much as I want to enjoy this book unconditionally, it must be mentioned. The riots of 2007 over the unannounced moving of the Bronze Soldier war memorial, beloved by members of Estonia’s Russian-speaking community, from its original location to Tallinn’s Military Cemetary, known as Bronze Night, or, euthemistically in this book, as “the Spring Disturbances”, were tumultuous events in the history of Estonia. While the rioting is widely-accepted to have been either instigated or at the very least spurred-on by Russia’s Nashi activist group, questions remain over the Estonian government’s eagerness to pursue integration policies for Russian-speakers, and the community’s wish or otherwise to integrate within Estonia.

Bronze Night was a flashpoint in the Republic of Estonia like no other in recent memory, and it was an event I was not in the country to witness. As such, I appreciated the pages of evocation of how the fighting, and the surrounding climate of fear and panic, developed. But as quickly as the reader is swept up into the moral fog of the situation, he is placed back down to earth by the news that rioters in Tartu had ripped a windscreen wiper off Petrone’s car. We are then taken on a lengthy aside about the enjoyment Petrone always got on visiting his local garage, which would only fix cars promptly if they were German.

We return to the rioting with some attempts to make sense of events, much of which makes sense, but which includes the following lines. “In retrospect, I think [then-Prime Minister Andrus] Ansip had a much more metaphysical grasp on what was at stake in Tonismagi. An avid cross country skier with the face of a fox, he sensed Estonia was a magical country. All over the land, one encountered ‘energiasambad’, energy columns, specific places pinpointed by psychics where the energy was so strong it could heal various maladies...”

“What Ansip perhaps grasped was that the Bronze Soldier was a massive Soviet energy column built to collect and discharge the energy of Stalin’s regime. It had stood peacefully through the tumult of the 1990s and early 2000s, but with Putin’s regime again transmitting, it was imperative that the Bronze transponder be switched off, removed, and reassigned an Estonian context - in a military cemetary - before the rejuvenated satanic Stalinist energy became too powerful for even NATO to resist.” If Petrone truly believes this spiritualism, I have a very hard time sympathising with his viewpoint. If, on the other hand, he is trying to bring cheerful folk whimsy to one of Estonia’s darkest-ever moments, this passage presents even greater difficulties.

There is the attempt at the end of the book to explain the scandal of 2013 in which Petrone, pulled over by the police, is forced to admit driving on an American licence in Estonia since he came to the country. I followed this on social media as it happened, feeling deep sympathy for Justin as he was dragged over the coals by the Estonian authorities. However, the truth is, he was driving on a non-EU licence, and so gave those authorities, seemingly happy to make the situation as uncomfortable as possible, a chance to inconvenience him - something acknowledged in the book.

This arguably harsh punishment of a man who was forced by police to leave his children sleeping in a car on a busy roadside, not even being able to drive them into a car park, is used as the springboard for a short essay on being tired of Estonia. This is the country which, at the beginning of the book, Petrone is imagining as he sits in a New York office. To use the title of Petrone’s popular and often excellent blog, the American abroad goes from “Itching for Eestimaa” to having itchy feet in his chosen country.

Petrone ends the book by telling his friend David that he is tired of moving, and wants to remain in one place, the implication being that it may as well be Estonia. This statement tries to come across as loving, but appears disturbingly full of ennui for those who developed their own love of the country through the earlier My Estonia books.
There is a great book to be written on Estonia’s struggle to be heard by the world’s elite, and to understand itself. Petrone has already written the definitive book about a foreigner finding his way in the republic. In My Estonia 3, he had the chance to make some sharper, deeper, points about a country he has lived in for over a decade. He had the chance to write something with real teeth. Instead the book does not know whether to be a love letter or a resignation letter.

At one point, the author describes an interview he had performed for a since-shelved book about Estonia. That book might have been fascinating. The frustration with My Estonia 3 may come from my no longer being able to love Estonia without critique - but if so, it comes equally from a feeling that, if Estonia is to be taken truly seriously on the world stage, it has to move on from a folksy, insular, small-country view of itself, and it needs to stop self-mythologising.