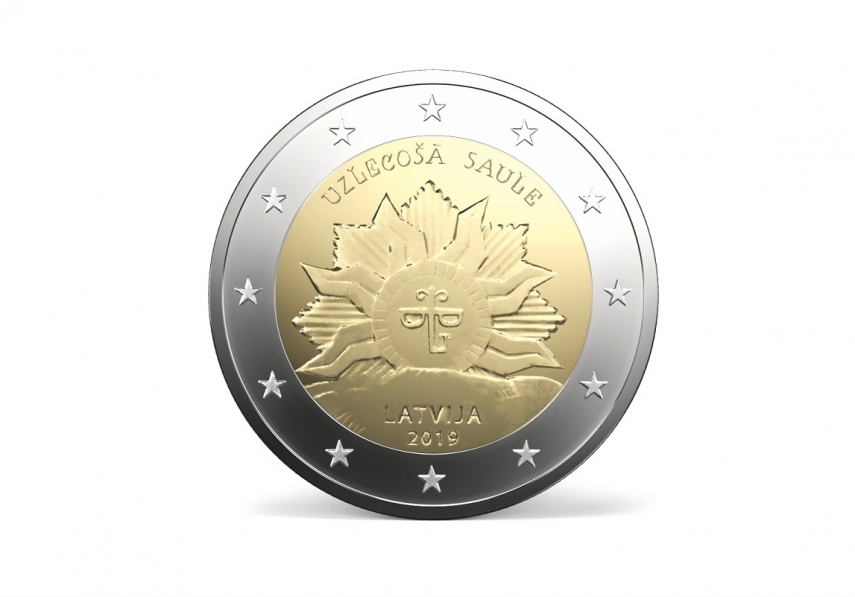 On Tuesday, 17 September, Latvijas Banka is issuing a 2 euro commemorative coin "The Rising Sun" dedicated to the history of the Coat of Arms of Latvia. At the same time, by this coin we shall also pay tribute to Ansis Cīrulis (1883–1942) artistic contribution that has been included in the Latvian Cultural Canon.

The motif of a rising sun was very popular at the time of the foundation of the Latvian state. The rising sun symbolised the new country. With the help of artist Ivars Drulle, the sun motif created by artist Ansis Cīrulis and emerging as one of the basic elements of the Coat of Arms of Latvia has reborn into the commemorative coin "The Rising Sun".

In 1915, this motif was first featured on the badges of the Latvian Riflemen Battalion and on the  flag of the 1st Daugavgrīva Latvian Riflemen Battalion. It was also part of the design proposal for the symbol of an autonomous Latvia, created by artist Ansis Cīrulis in 1917 (the land and a rising sun with broken sunbeams). Later on this motif emerged as one of the basic elements of the Coat of Arms of Latvia.

The graphic design and plaster model of the national side of the new commemorative coin has been created by artist Ivars Drulle, while the common side of the coin bearing the nominal value (artist Luc Luycx) is the same as that of other 2 euro circulation coins, including material and size.

Latvijas Banka continues the tradition of minting circulation coins of special design in Latvia. Euro commemorative coins are legal tender in the Republic of Latvia and other euro area countries.

The new commemorative coins will be circulated in the same way as any other circulation money, reaching commercial and other enterprises as well as the general public through banks. The coins will be available for exchange starting from 8.30 a.m.