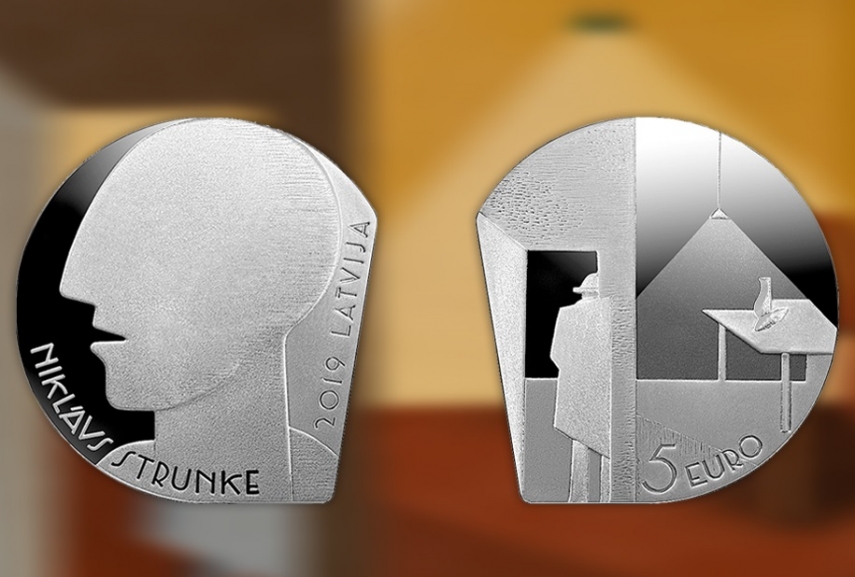 On Thursday, 11 July, Latvijas Banka is issuing a silver collector coin of a specific shape dedicated to the creative heritage of Niklāvs Strunke (1894–1966), Latvian painter, graphic artist and stage designer.

Niklāvs Strunke, one of the most original Latvian modernists, strongly proved his worth as an artist at the time coinciding with the declaration of Latvia's independence. One of his most distinguished works, the painting "Man Entering a Room" (1927), has been included in the Latvian Cultural Canon. It is this painting that has been depicted on the reverse of the collector coin "Niklāvs Strunke". Meanwhile, the coin's obverse features a fragment of his painting "Self-Portrait with a Doll" (1921).

The graphic design of the collector coin "Niklāvs Strunke" has been created by artist Paulis Liepa, whereas the author of the plaster model is Ivars Drulle. Paulis Liepa has authored two collector coins, i.e. the innovative silver collector coin "365" as well as the collector coin "National Entrepreneur" featuring 25 raised facets on the reverse. The latter was announced the winner in the category "Most Artistic Coin" at the prestigious international competition "Coin of the Year" in 2018.

Paulis Liepa continues to experiment with the coin shape also in the work dedicated to creative legacy of Niklāvs Strunke. The shape of the coin is a circle where the edge cut by a secant forms a 99° angle with the circle's tangent.

The collector coin "Niklāvs Strunke" is legal tender in the Republic of Latvia, yet the release of such coins in circulation is highly unlikely, as they are in fact works of art and are in special demand among coin collectors and other interested parties.

A representation of a fragment of the painting "Self-Portrait with a Doll" (1921) by Niklāvs Strunke is featured in the centre with two frostings of different intensity. The inscription NIKLĀVS STRUNKE is placed in the lower left part of the coin, with the year 2019 and the inscription LATVIJA placed to the right.

The painting "Man Entering a Room" (1927) is depicted with three frostings of different intensity, with the inscription "5 EURO" at the bottom right.

Niklāvs Strunke (1894–1966), Latvian painter, graphic artist and stage designer, was born in Gostynin in Poland and passed away in Rome, also far from Latvia. Since 1903, he and his brother spent their childhood on the farm "Palmēni" in Valmiera in the care of the sister of their father who served in the army of the tsarist Russia (the essays about art, written later in his life, were signed with the name "Palmēnu Klāvs"). After finishing the Progymnasium of E. Liepiņš, Strunke continued his studies at the School of the Imperial Society for the Encouragement of the Arts in St. Petersburg and the Art Studio of Mikhail Bernstein where he drew inspiration from Russian modernists and evolved as a painter. The soon-to-be artist also refined his skills in other art studios such as the workshop of Jūlijs Madernieks (1870–1955) and that of Vasily Mate (1856–1917), graphic artist of the Academy of Arts in St.Petersburg, mastering etching and linocut techniques. As he lost his father and brother in World War I, Niklāvs Strunke volunteered to join the Cavalry Reconnaissance Unit of the 6th Tukums Latvian Riflemen Regiment where he met Jāzeps Grosvalds (1891–1920), one of the pioneers in Latvian modernism.

Having participated in exhibitions since 1914, Niklāvs Strunke had firmly established himself as one of the most original Latvian modernists at the time coinciding with the declaration of Latvia's independence. In the mid-1920s, Niklāvs Strunke introduced cubism in his paintings as well as his graphic designs of books and stage designs, featuring, in varying proportions, constructive geometric and illusory painting techniques. This was the time of high creativity and experimentation when the elements of cubism were increasingly influenced by constructivism, futurism and suprematism as well as Art Deco, 13th–15th century Italian paintings, Eastern miniature paintings and Latvian ethnographic heritage.

Niklāvs Strunke perfected his signature style in Germany and Italy. He participated at the Great Berlin Art Exhibition already in 1923 and held a solo exhibition in Rome in 1924. During his stay in the European metropolises, Niklāvs Strunke became involved in the local art life and established contacts with avant-garde artists. In his 1924 Paris manifesto "Le futurisme mondial" (Worldwide Futurism), Filippo Tommaso Marinetti, founder of the Futurist movement, counted Niklāvs Strunke among the broad, international community of European avant-gardists. In late 1920s, the artist's signature style changed as he turned to conservatism. As a recognition for his artistic work, Niklāvs Strunke was awarded the Order of the Three Stars (Fourth Class) in 1933. At the end of World War II Niklāvs Strunke sought refuge in Sweden; works dedicated to the theme of exile were created in Stockholm and Italy.

As a graphic designer of books, Niklāvs Strunke created hundreds of book covers and dozens of illustrated publications. He also created stage designs for several theatres and the Latvian National Opera, sketches of stained glass and porcelain artwork, poster and bookplate art as well as exhibition set-ups. Above all, however, he was a painter. Paintings of landscapes, portraits and still life reflect the artist's travels, agile temperament and his romantic outlook on life; dolls and ethnographic objects from his own collection. One of the most outstanding works of Niklāvs Strunke, the painting "Man Entering a Room" 1927), is included in the Latvian Cultural Canon and featured on the reverse of the collector coin dedicated to the creative heritage of Niklāvs Strunke.

Since 1993, Latvijas Banka has issued 98 lats collector coins and 32 euro collector coins, with over 50 Latvian artists having participated in designing them.

Latvian coins have earned high international respect and a number of prestigious awards; moreover, the "Coin of Latvia" won the international 2010 Coin of the Year Award at the contest organised by US Krause Publications and its magazine World Coin News. In 2015, the silver collector coin "The Baltic Way" was recognised as the Best Contemporary Event Coin at this contest. In 2018, the collector coin "National Entrepreneur" was announced the Most Artistic Coin of the Year at the contest.

The Coin Design Commission of Latvijas Banka (the former Commission for the Thematic Concept of the Banknotes and Coins), operational since 12 November 1993, plays an important role in the coin issuing process. The Commission consists of the employees of Latvijas Banka, outstanding Latvian experts of art and culture as well as artists and scientists.

After the introduction of the euro, Latvijas Banka carries on the tradition of issuing collector coin series with motifs characteristic of Latvia and executed in high artistic quality. These coins are legal tender only in the issuing country. They are unlikely to come into general circulation, for, by nature, they are works of art enjoying high demand from the numismatic community and other interested parties.

For information on the collector coins on sale at e-monetas.lv and the Cashier's Offices of Latvijas Banka, see https://www.e-monetas.lv un https://monetas.bank.lv/iegade.

Commemorative coins bear the same features and the same common or European side as the normal 2 euro circulation coins, while their national sides differ and feature a national commemorating motif.

Euro commemorative coins are legal tender throughout the euro area. This means they can be used – and must be accepted – just like any other euro coin.