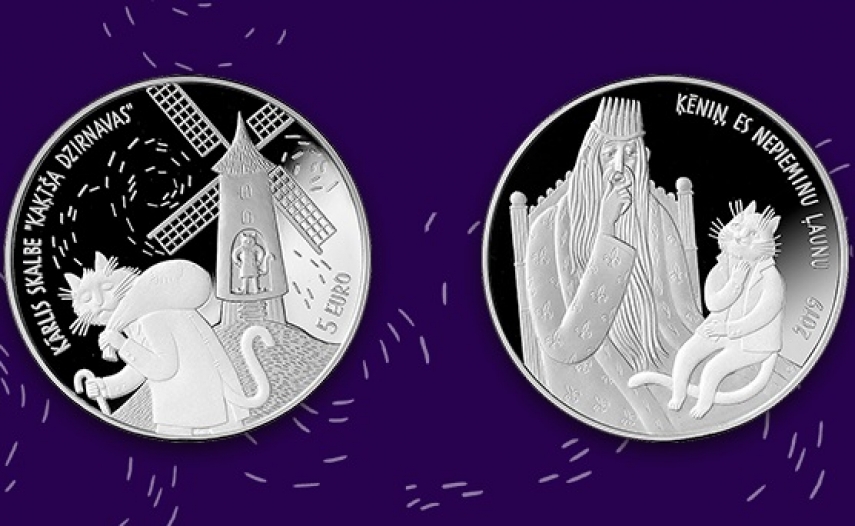 The fairy tale "Cat's Mill" from Kārlis Skalbe's "Winter Tales" (1913) that has been included in the Latvian Cultural Canon was voted the best-loved literary work in Latvia by the "The Big Read" telecast series public opinion poll in 2014. People love the fairy tale for its benevolence which is so close to the Latvian mentality and folk song ideals as well as the writer's talent to evoke the deepest human emotions. The cat's mill has filled the heart and soul of nearly every Latvian with warm compassion.

The moral of the fairy tale is: do not spread evil and learn to forgive. Other values taught by this fairy tale are honesty, diligence and love. The fairy tale's multi-faceted message is useful at any age.

The graphic design of the collector coin "Cat's Mill" was created by Elīna Brasliņa, whereas the author of the plaster model was Ligita Franckeviča. This is the young and talented Elīna Brasliņa's debut in coin art. She is publicly known as a book illustrator: more than 20 children's books with Elīna Brasliņa's illustrations, including the "Art Detectives" series, have already been published. Her first animated film "Jacob, Mimmi and the Talking Dogs" has also been recently released to the theatres.

Beginning with 8.30 a.m. on 11 April, the new coin will be on sale online via e-monetas.lv, Latvijas Banka's website for purchases of collector coins and other numismatic products, and at the Cashier's Offices of Latvijas Banka at K. Valdemāra iela 1B in Riga and Teātra iela 3 in Liepāja.

The price of the coin at Latvijas Banka Cashier's Offices and via e-monetas.lv is 46.00 euro.

The maximum mintage of the coin is limited to 2500. The coin was struck by UAB Lietuvos monetų kalykla (Lithuania).

The collector coin "Cat's Mill" is legal tender in the Republic of Latvia, yet the release of such coins in circulation is highly unlikely, as they are in fact works of art and are in special demand among coin collectors and other interested parties.