Latvian independence day and reflections on the military reality 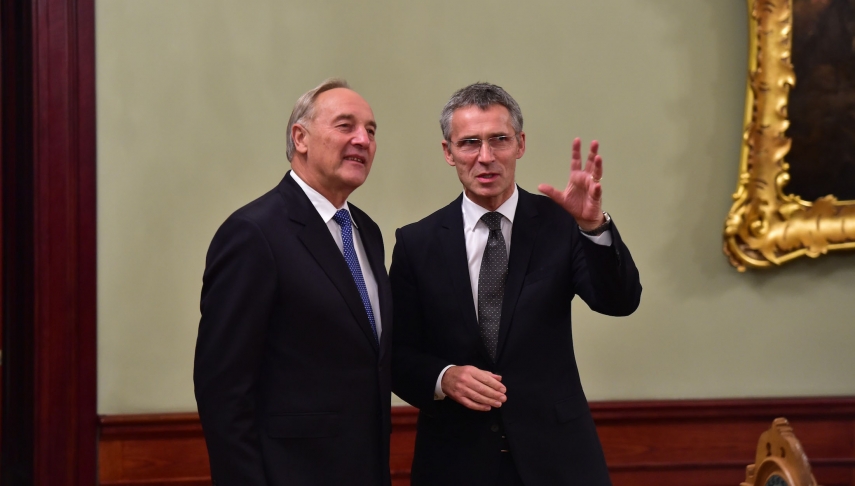 UNDER NATO'S WING: But has this led to Latvia's defense forces getting complacent?

RIGA - On 18 November 2014, Latvia celebrated its Independence Day with a military parade – a well trodden way for a nation to display its military might, both to its people and to the outside world. The parade included NATO representatives as well as those from other military forces, and as a retired member of the military, I always enjoy the show.

This year, though, I was particularly interested in observing these festivities for other reasons. The recent Russian involvement in Ukraine has had a chilling effect on the Baltic states, and I wanted to see what effect that has had on the celebrations, and how the Latvian military and NATO was responding to events in Ukraine.

What I saw, even just from the parade, was not encouraging. It was all spectacle and very little substance. The day was like an action movie with no plot: the show was good and the players played their parts well, so I don’t blame the actors. But I do fault the directors. The directors in this case were the government, the military leadership, and NATO. Collectively, their shortcomings in planning and management leave a lot to be desired, and I am not just referring to the parade, but to the way the whole country’s defense has been organized.

I feel this way for several reasons, and they all spring from the Russian invasion of Ukraine, which has had a direct influence on current events in Latvia. Many Latvians are uneasy about what Russia is doing in Ukraine, and realize a similar situation could happen in Latvia if Russia is not stopped.

Russia, however, has not decreased its aggressive actions and no other nation has been able to stop them, even with the West’s imposition of economic sanctions. In fact, Russia has not only increased its aggressive behavior in Europe; it has also upped its military activities across the world. Before the recent G20 Summit in Brisbane, warships from Russia’s Pacific Fleet were even detected just off Australia’s Northern coast!

In response to Russia upping the military stakes in a number of regions across the globe, NATO has intensified its air policing operations. In no place has this been more apparent than over the Baltic nations, considered by some defense analysts as NATO’s Achilles’ heel. A recent report by the European Leadership Network has shown that Lithuania and Latvia have reported respectively over 68 and 150 incidents of Russian airspace incursions. Other serious incidents in Europe involving Russia have included: a near miss with a SAS civilian plane taking off from Copenhagen; a Russian reconnaissance plane operating with its transponder switched off; the abduction of an Estonian counter-intelligence officer from a border post; and the movements of a suspected Russian submarine in Swedish territorial waters.

The Russian response tends to be to pass off most of these activities as just benign training events that any country is entitled conduct, and in the case of abduction of the Estonian Counter Intelligence agent, Russia insists he was captured on its side of the border, and was within its rights to take the Estonian agent into custody.

At the recent NATO conference held in Wales, NATO reiterated its commitment to collective defense and planned to establish a new fast reaction force of about 5000 troops that would decrease reaction time to Eastern Europe from five to two days. It now appears that such a plan is not as easy to implement as thought. Some problems facing this plan are that after the Cold War ended, NATO nations began downsizing their military and currently only three countries out of 28 members actually meet the minimum goal of contributions to the NATO budget of 2% of each countries budgets. NATO is struggling with who will pay for the force, troops and equipment. Many diplomats now think that the earliest time this “spearhead” force could be operational is in 2016.

Recent visits by NATO and other foreign dignitaries all try to convince Latvia that they support Latvian independence and will help defend them. Foreign solidarity with Latvia was demonstrated in the independence parade by the many foreign military contingents marching with the Latvians. Even the United States had an Abraham’s main battle tank in the parade.

But it’s only too bad that a Latvian soldier wasn’t in it, and that the tank was on a truck bed and only used for demonstration purposes. To the uneducated eye all this show of support may have seemed impressive, but it misses the point that Latvians are still unable defend themselves.

When German Chancellor Angela Merkel visited Latvia, she stated that she didn’t see any need for a permanent NATO force in Latvia.  There are, though, some NATO representative countries — like the United States contingent — that is in Latvia now. But its small size adds only a limited measure to the Latvian defense structure.

I attended the recent visit to Latvia by the new NATO Secretary General, Jens Stoltenberg, and during the conference Stoltenberg reiterated that NATO’s collective defense alliance with Latvia is there to provide defense assistance to Latvia and the Baltic States. Stoltenberg, it appears, has three priorities as NATO secretary: keep NATO strong, work with NATO partners, and raise finances on both sides of the Atlantic.

According to Stoltenberg, NATO is proactive in the Baltics and is continuing to increase its presence there. This kind of rhetoric often draws Baltic citizens into a false form of complacency that their defenses are secure.

Though there was no NATO in World War II, this sort of support talk I heard from Stoltenberg reminds me of the problems that Finland had with Russia in 1939.  After Nazi Germany and Russia signed a non-aggression pact, Russia invaded Finland because they wanted a new naval base and more territory. The Finns put up a stiff resistance, but in the end, when Britain and France were unable to come to their aid, the Finns had to capitulate to Russian demands. A month earlier, the Baltic States were invaded by Russia and what happened after World War II was the forced illegal Russian occupation of the Baltic States until 1991. To this day, this forceful occupation in the past still gnaws at the minds and hearts of the Latvian people. The major powers then as now, condemned Russia for their actions against the Baltics.

Today almost all the major world powers also condemn Russia for her actions in Ukraine. Is history trying to repeat itself?

The Latvian military establishment also has done very little, because frankly, they don’t have the funds, manpower, or equipment to counter any national security threat. The Latvian military is totally dependent on NATO support for its entire defense. President Putin’s Russia is and remains a threat to Latvian independence. And whether or not Latvia makes it to its 100th year of independence or any further Independence Day celebration still falls largely into Russian hands.

How is the Latvian military reacting to all these provocations? Honestly, very little has been done and one can see that in the parade. Over a decade ago, the Latvian defense structure stood at roughly about 7500 personnel. Today, the figure has dropped to around 5000 personnel and is still falling. By the military’s own admission, the voluntary military enlistment program is having difficulties in bringing in recruits. The current strength figures include not only the army, but all military, which includes air force and navy as well.

Sadly enough, the military leadership has not addressed some important issues beside recruitment. The Latvian military currently has in its inventory too many outdated and ineffective weapons systems. In their defense, they have tried to modernize. But again, due to funding constraints, they have often either bought too little or bought older systems. This type of management leads me to believe that upper management has no definitive plan to modernize the army. However, the military establishment continues to extol its efforts to do so.

Then there is the question of the military’s actual strength figures. On paper, the statistics show strength figures of around 5000 on the active side and almost 11,000 reservists. My experience with working with the Latvian ministry of Defense makes me suspect of those figures. Almost all those units were once vastly under strength, and the chances are that is probably still the case to this day. Again, on paper, the ministry shows all kinds of units that don’t match up with the actual strength figures and that would mean there are many cadre or “ghost” units. There’s nothing wrong with that, per se, as many nations do it. But in this case it is false representation to the Latvian people who believe that their military is at full strength, and if not, they could also be lacking in vital training.

My past experience with the Latvian military also makes me believe that Latvian army units cannot currently sustain themselves logistically in the field for any reasonable length of time. The logistical units in place now are not sophisticated enough to provide adequate field support in actual combat conditions simply because they don’t have the capability to do so. Latvian military forces are so few. They would be out-manned, and out-gunned; they would be unable to prevent any Russian aggression against Latvia. Just think of the numbers and weapons at the Russian disposal compared to what Latvia can field. Russia still could field hundreds of thousands troops in an invasion attempt, while Latvia at the most has 1000 to defend its borders. Russia successfully invaded Crimea in days and annexed it shortly thereafter. Due to extensive Russian capabilities and Latvian military incapabilities, some analysts think that Russia could invade Latvia within a matter of hours. The NATO response time of five days could be too late and ineffective.

So, is this a possible scenario?

No, I don’t think so necessarily. But even if you hope for the best, any self respecting military should be preparing for the worst. As under a dangerously possible set of circumstances and conditions, an invasion of Latvia could happen, and contingency plans of possibilities must match practical realities. After all, before Crimea was annexed back in March this year, everyone had written off Russia’s annexation as similarly impossible.

So, who is to blame for the lack of preparations? Well, I blame the Latvian military leadership for not pointing out these shortcomings to the Saeima, and I blame the Saeima for not taking a more active role in overseeing the military and not taking sufficient corrective action.

The military has to rethink its organizational missions and come up with a different strategy. NATO needs to take even more steps to prevent Russian aggression. Conducting more joint military exercises accomplishes little when basic military skills are missing. We are one nation and ethnic Russians can be a part of that nation. I believe that Latvia will solve many of these problems facing them, even though it may take some time. To stop these ethnic differences from flaring up, Latvian society will have to come up with compromises and to move on from its past. Facing reality is hard to do as it involves acknowledging your failures and accepting solutions that may seem too harsh.

I only wish the best for Latvia and may it continue to thrive and remain independent forever. But this is just wishful thinking unless Latvia seriously starts rethinking how its military is run.

Lieutenant Colonel Viesturs Janis Drupa,retired, U.S. Army is a former Army General Staff Officer at the Pentagon, and a former board member of the Baltic Institute in Washington DC.