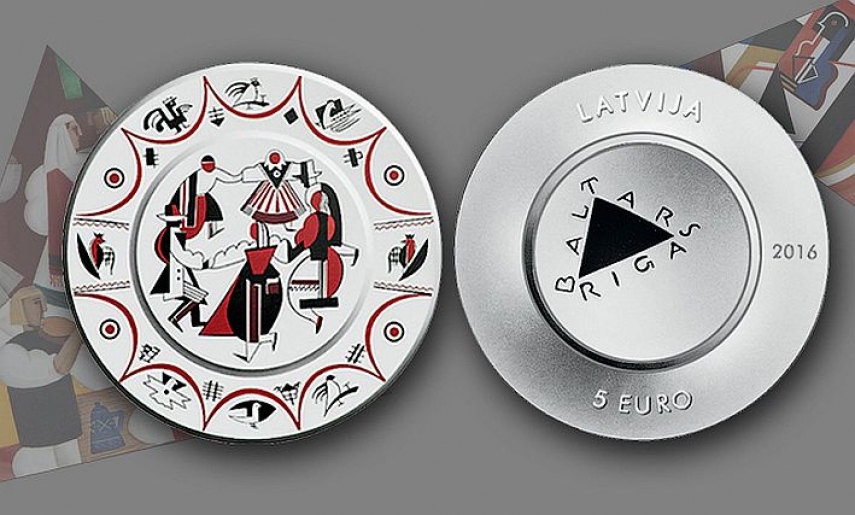 Representing Latvian currency coins dedicated to outstanding events and personalities in culture, Standard of Quality, the second satellite exhibition of the project JUST ON TIME. Design Stories About Latvia, will be on view at the Museum of Decorative Arts and Design in Riga (Skārņu iela 10) from 19 October to 2 December 2018.

Money not only fills the function of means of payment, but also of state representation, especially if it possesses high artistic merit. All of these qualities belonged to the symbol of the first independent Latvia – the five-lat coin designed by artist Rihards Zariņš with the profile of a folk maiden, known as Milda. During the Soviet period, many families kept this piece as a relic testifying to the Latvian nation’s longing for a free state.

Upon regaining independence and recognising the symbolic and aesthetic significance of currency, since 1993 Latvijas Banka has paid particular attention to innovative artistic, technical and thematic solutions for its coins. Unique examples of collector’s coins have been created over the course of twenty-five years, which, taken together, build a multi-faceted story about Latvia in national as well as international context. More than 120 coins tell about the foundation of the state and important events in the history of Latvia, our natural treasures, sporting achievements, national traditions, cultural events and outstanding personalities.

Each collector’s coin stands out with its original design. In essence, they are miniature works of art, in which important ideas are merged with exquisite form. Along with the classical circular shape, coins are being designed in quadrangular, hexagonal, oval and many other forms. Often the artistic design of the coins makes use of the combination of silver and gold, gold plating, colouring the inlay of granite, amber, which are so characteristic of Latvian nature, in the precious metal, as well as using other very specific materials, such as the ceramic material perlucor.

Owing to their outstanding artistic design, collector’s coins issued by the Latvijas Banka have been included in the Latvian Cultural Canon. Latvian coins are also very highly regarded abroad, having received many prestigious awards. According to art historian and member of the Coin Design Commission of Latvijas Banka, Ramona Umblija, it is our innovative approach to coin creation that has to a certain extent stimulated the introduction of many novelties in around ten of the best European money and coin mints, with which Latvijas Banka has established successful cooperation.

The Museum of Decorative Arts and Design (MDAD) is grateful and proud that Latvijas Banka has presented a full set of collector’s coins for the museum’s collection. Welcoming the centenary of the Latvian state, MDAD invites everybody to get to know a small part of this collection – the coins dedicated to outstanding events and personalities in culture. It is noteworthy, that coin design, which included in the design section of the Latvian Cultural Canon, makes an organic link to the authors and works encompassed in other categories of the Canon, for example, painter Janis Rozentāls, Rūdolfs Blaumanis, Rainis, Aleksandrs Čaks and porcelain from the Baltars workshop.

The making of coins consists of several stages, beginning from sketches of the idea on paper or on a computer screen to the minted coin. One of the visually most attractive and interesting parts of the process is the plaster model, from which the coin’s matrix is made. Thanks to the kind cooperation of Latvijas Banka and artist Laimonis Šēnbergs, the exhibition provides a rare opportunity to see some of the forms, thus enriching the understanding about the making of coins, which will surely serve as the standard of quality of our culture and design for reaching new peaks in the 21st century.